40 contemporary works of art which make up 'The Human Zoo' a challenging, thought-provoking exhibition intended to make us think about man's relationship with animals, by looking at the subject matter and technique contemporary artists have used to explore the role that animals play in modern society 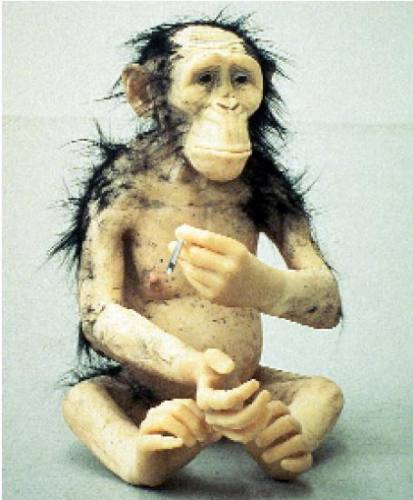 A small chimp, its body half covered by matted hair, stares forlornly into the distance; in its - distinctly human - left hand, a hypodermic syringe is poised ready to inject into pallid, waxen, skin.

John Isaacs's disturbing sculpture, Untitled (Monkey), is among 40 contemporary works of art which make up 'The Human Zoo' a challenging, thought-provoking exhibition curated by Karen Chapman for the Hatton Gallery at Newcastle University.

The exhibition, says Chapman, is intended to make us think about man's relationship with animals, by looking at the subject matter and technique contemporary artists have used to explore the role that animals play in modern society.

'In the past, animals were largely portrayed in art as existing to serve man, so for example, people commissioned images of their horses and dogs as a symbol of their status as owners.
This exhibition re-examines our relationship with animals, how we co-exist with them - and they with us. Whereas, traditionally, art featuring animals tended to serve purely as a sentimental record for their owners, contemporary art is focussed much more on the perspective of the animals themselves. Contemporary artists see animals more as equals, with their own values which exist outside of their relationship with man.'

In Untitled (Monkey), John Isaacs combines aspects of human and primate physicality to create his disturbing hybrid. The piece is purposefully imperfect, with human hands (cast from a five-year-old child) and patches of human hair which seem to have been clumsily grafted onto the monkey's body. In this 'failed experiment' Isaacs ensures that the viewer realises that it is the human aspect of the figure, wielding the syringe, that is in control; through the creature's expression of forlorn vulnerability he leaves us in no doubt that this pitiful beast has come to exist at the hands of man - a supposedly more 'advanced' species.

But by no means all of the artists in this carefully-thought out exhibition employ 'shock tactics' to convey their message.

Collaborative partners Olly Williams and Suzi Winstanley search specifically for wildlife which is under immediate threat from mankind. They see their work as providing permanent physical proof of the existence of endangered species; the animals leave their own mark on the work, and so their interaction with the artist becomes much more personal than mere photographic documentation.

Through their paintings and accompanying photographs of African wild dogs, made in Tanzania earlier this year and being shown here for the first time, Olly and Suzi seek to draw attention to the creature's real plight: Lycaon pictus (or 'painted wolf') is now a critically endangered species.

Liz Arnold presents complex issues of global significance in a highly accessible way. Her cartoon-like characters - creatures in humanistic poses, wearing unlikely items of clothing - are quirky, even ludicrous, but at the same time, their setting against apocalyptic and industrial landscapes implies that the creatures are a product of conditions outside their control.

Britta Jaschinski's unromanticised depictions of animal life pose fundamental questions regarding our treatment of, and attitude towards, the study of wild animals, asking the viewer to consider whether humans have the right to cage wild animals, and what affect such incarceration has on them. Here, in her Zoo series, she provides mere glimpses of the creatures, reflecting the reality of a visit to the zoo, where animals often refuse to 'perform' on demand. In contrast, images from her Wild Things series - large scale prints of 'big game' with all background removed from the composition - also on display, considers the impact that context has on our understanding of the animal.