Commemorating the centennial of the moment at which a series of artists 'invented' abstraction, the exhibition is a sweeping survey of more than 400 artworks in a broad range of mediums -including paintings, drawings, prints, books, sculptures, films, photographs, recordings, and dance pieces- that represent a radical moment when the rules of art making were fundamentally transformed. A key premise of the show is abstraction's role as a cross-media practice from the start. 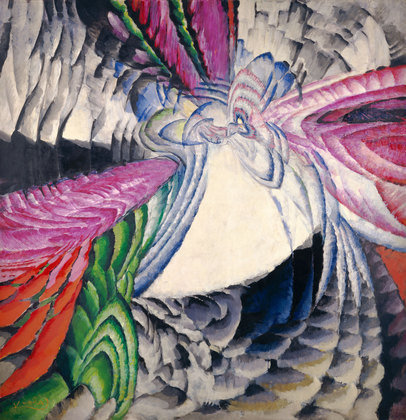 Inventing Abstraction, 1910–1925, on view at MoMA from December 23, 2012, to April 15, 2013, explores the advent of abstraction as both a historical idea and an emergent artistic practice. Commemorating the centennial of the moment at which a series of artists “invented” abstraction, the exhibition is a sweeping survey of more than 400 artworks in a broad range of mediums—including paintings, drawings, prints, books, sculptures, films, photographs, recordings, and dance pieces—that represent a radical moment when the rules of art making were fundamentally transformed. Half of the works in the exhibition, many of which have rarely been seen in the United States, come from major international public and private collectors.

The exhibition is organized by Leah Dickerman, Curator, with Masha Chlenova, Curatorial Assistant, Department of Painting and Sculpture, The Museum of Modern Art.

A key premise of the exhibition is abstraction’s role as a cross-media practice from the start. This notion is illustrated through an exploration of the productive relationships between artists, composers, dancers, and poets in establishing a new modern language for the arts.
Inventing Abstraction brings together works from a wide range of artistic mediums to draw a rich portrait of the watershed moment in which traditional art was wholly reinvented.

Roughly one hundred years ago, a series of rapid shifts took place in the cultural sphere that in the end amounted to the greatest rewriting of the rules of artistic production since the Renaissance. Invented not just once, but by different artists in different locales with different philosophical foundations, abstraction was quickly embraced by a post-Cubist generation of artists as the language of the modern.

One of the first pictures in the exhibition, Woman with a Mandolin, made by Pablo Picasso (Spanish, 1881–1973) in 1910, shows how he approached the brink of abstraction before turning away. Beginning in December 1911 and across the course of 1912, a handful of artists, including Vasily Kandinsky (Russian, 1886–1944), Robert Delaunay (French, 1885–1941), and Frantisek Kupka (Czech, 1871–1957), presented the first abstract works in public exhibition. Inventing Abstraction surveys the early history of abstraction from this pioneering moment through the mid- 1920s, when it was broadly embraced by the avant-garde.

From the start, abstraction was an international phenomenon, with ideas, images, and people traveling across borders through a new modern media and exhibition culture. Its pioneers were far more closely linked than is generally known. Highlights in Inventing Abstraction include Kandinsky’s Composition V, his most ambitious early abstract work; an important sequence of Mondrian paintings that traces the development of his work from his famous Tree pictures of 1912 to a group of superb early Neo-Plastic paintings; works by Malevich documented in his display at the landmark “0.10” exhibition held in Petrograd in 1915; a group of early rare works by avantgarde artists Katarzyna Kobro (Polish, 1898–1951) and Władysław Strzemiński (Polish, 1893– 1952), calligramme poems by Guillaume Apollinaire (French, 1880–1918), dance notations by Rudolf von Laban (Hungarian, 1879–1958) and musical scores by Arnold Schoenberg (Austrian, 1874–1951).

The exhibition is made possible by Hanjin Shipping.
Major support is provided by the Anna-Maria and Stephen Kellen Foundation and by Marie-Josée and Henry Kravis.
This exhibition is supported by an indemnity from the Federal Council on the Arts and the Humanities.
The accompanying seminars are made possible by MoMA’s Wallis Annenberg Fund for Innovation in Contemporary Art through the Annenberg Foundation.