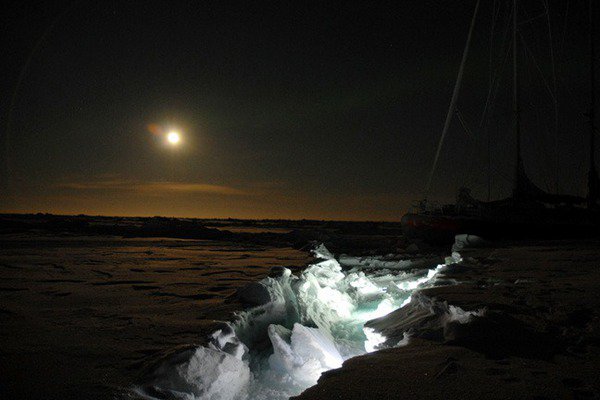 The artists share a common preoccupation with walking, roaming, and drifting—moving slowly, close to the ground—and documenting their travels within highly personal terms that blend cartography with memory.

All four have embarked on epic journeys, such as crossing an entire continent on foot or floating through the darkness of the Arctic for months—each one motivated by a different impulse or political perspective. Collectively, the artists work against contemporary notions of immediacy and access in a globalized world where any data point appears to be a search away and other cultures can seem legible with a quick round-trip. Their works dramatize distance between countries and cultures, across borders and time zones, to demonstrate how layered and complex a local stretch of terrain can be.

The themes of “Walking Drifting Dragging” took shape through dialogue between current Museum as Hub partners—art space pool, Seoul, de_sitio, Mexico City, Miami Art Museum, the New Museum (founder), Townhouse Gallery, Cairo, and the Van Abbemuseum, Eindhoven—a network of international art spaces dedicated to international exchange through the support of emergent artistic and organizational practices. “Walking Drifting Dragging” will be on view in the New Museum’s fifth-floor Museum as Hub space from January 9–February 3, 2013, and is organized in conjunction with “Running On Borders,” an exhibition that will take place at art space pool in Seoul, South Korea, in 2013. It is organized at the New Museum by Lauren Cornell, Curator of the 2015 Triennial, Digital Projects, and Museum as Hub.

The exhibition features the work Earth Thief (2009) by Eunji Cho, a performance, here shown as video documentation, in which the artist crossed hundreds of borders within the city of Berlin—some visible and active, others (like that of the Berlin Wall) now defunct. During her circular trip, she dragged a bag of dirt behind her, filling it with soil from different parks or plant beds and then letting it leak out as she walked. Connecting this work to her personal history, Cho, who was born in South Korea in the 1970s, explains, “The line is always in my mind,” referring to the border between North and South Korea. Her act of fertilizing areas of the city can be seen as an act of renewal: a free-form artistic re-zoning, where old borders are erased or muddled with new lines created in her wake.

The artist Paulo Nazareth walked across national borders in a transcontinental route—that started in Belo Horizonte, Brazil, and lead to New York City—allowing for many digressions and stops along the way. In Guatemala, for instance, he was temporarily adopted by a local family and everywhere he traveled he ate with strangers who became his temporary walking companions. The photographs, installation, and video that constitute his ambitious work “News from the Americas” (2011–12) capture the shifting perceptions of his identity that formed along his travels—in different places, navigating various national, cultural, and linguistic projections—working to break down a single conception of Latin America into hundreds of distinct, though interconnected, pieces.

Bhotbhoti Tales (2009) by Desire Machine Collective explores this same kind of shifting perception of a single entity, in this case the transnational Brahmaputra River, which has a different name in each region it borders— such as the Yarlung Tsangpo River in Tibet, Dihang and Brahmaputra in India, and the Jamuna in Bangladesh. In their video installation, Desire Machine Collective, who have taken up studio residence on a ferry in the Brahmaputra, speak with local boatmen about the river.

What emerges is a multifaceted, contradictory view of the river’s geography and its lore; as the boatmen’s stories provide a depth and an anecdotal history that contemporary mapping technologies like Google Streetview or Earth cannot render.

Finally, the show includes a collection of works by Ellie Ga that document her time aboard a ship that drifted through the glacial darkness of the Arctic for five months on a scientific expedition. The only artist on the boat, Ga counters the scientific measurements made by her co-travelers with more subjective ones: sketching the drift of the boat, measuring her possible walking distance at given stops, taking photographs of dawn and sunset.

These works, alongside a video in which she narrates her experience, reflect the way she relinquished control over movement and time on the trip and surrendered to the processes of drift. Artists’ journeys have been documented throughout art history: Those whose main practice has been “walking” include British artists Richard Long and Hamish Fulton, as well as others like Francis Alÿs, whose counterintuitive trip in “The Loop” (1997), from Mexico to California via a loop around the world (all to avoid the crossing of the US–Mexico border), was message-driven. “Walking Drifting Dragging” emerges from this history and provides a glimpse into contemporary practice of artist expeditions.

The exhibition will be complemented by public programs, a performance by Ellie Ga on February 1, 2013, as well as “Remember Carthage” (2013), a newly commissioned digital project for the Museum’s First Look: New Art Online program by Jon Rafman in which he explores the possibilities of travel through virtual worlds. See newmuseum.org for more information.

About Museum as Hub

• Exhibitions that have introduced important art and ideas from around the world. These have been organized and hosted by the New Museum and Hub partners, as well as a growing network of international spaces that includes the Beirut Art Center, Bidoun, and, in May 2013, the Center for Historical Re-enactments in Johannesburg.

• Public programs, including the signature series Propositions, a two-day seminar that invites an artist, curator, or thinker to explore an idea currently in development.

• Digital Initiatives, which build on the knowledge sharing and research aspects of the Hub. View our ongoing editorial on international projects on our Six Degrees blog and online art through First Look, also at: newmuseum.org.

Endowment support is provided by the Rockefeller Brothers Fund, the Skadden, Arps Education Programs Fund, and the William Randolph Hearst Endowed Fund for Education Programs at the New Museum. Education and public programs are made possible by a generous grant from Goldman Sachs Gives at the recommendation of David and Hermine Heller.

About the New Museum

The New Museum is the only museum in New York City exclusively devoted to contemporary art. Founded in 1977, the New Museum is a center for exhibitions, information, and documentation about living artists from around the world. From its beginnings as a one-room office on Hudson Street to the inauguration of its first freestanding building on the Bowery designed by SANAA in 2007, the New Museum continues to be a place of ongoing experimentation and a hub of new art and new ideas.