'In The Party of Ghosts' Niedziolka is interested in the transience and ghostly simultaneity of absence and presence. Hyde's 'Glass Box' paintings appear simultaneously illusionistic and literal. Labatte creates color inkjet photographs of sculptural assemblages. 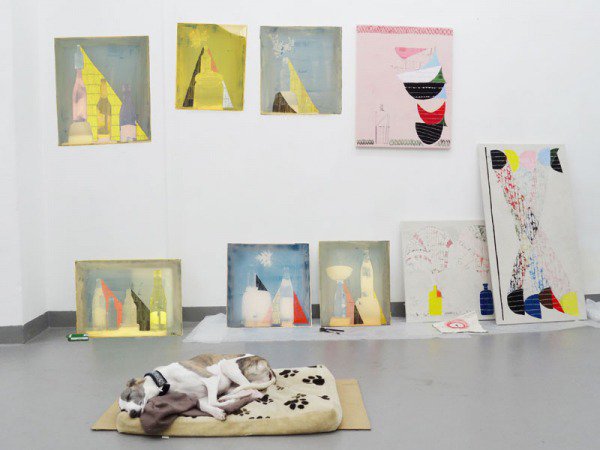 Proceeding to work both in the tradition of Dada textile artists who embraced the irrational such as Jean Arp and Hannah Hoch and with the democratized folk-art technique of sewing, Niedziolka’s recent embroideries continue to combine whimsical abstractions with implied still life compositions, though now with the focus shifted onto the work’s constructed form. Only hints of color appear in these compositions, issued from delicate lines of colored thread on untreated cotton.

The subtle variation of line color and density in the artist’s stitchwork demonstrates that Niedziolka’s embroideries have become increasingly concerned with relating to drawing on paper techniques. The result is a simplicity that resembles the contemplativeness of sketches and underpaintings utilized throughout the history of painting. By reducing the spontaneous forms and colors characteristic of her past work Niedziolka emphasizes both the physical embroidery technique as well as this historical tradition of working out complex compositions by drawing with minimal elements.

Also exhibited are works from Niedziolka’s new series of photo exposures, which utilizes photo-sensitive techniques quite new to the artist. For these more highly saturated works, the imprinting of found three-dimensional objects onto silk by way of screen-printing yields images that document excitingly variable chemical processes in action. The artist enjoys freely experimenting with different mixtures of light-sensitive emulsions and varying material compositions of objects so that her results are constantly changing. Here, Niedziolka is interested in the transience and ghostly simultaneity of absence and presence that these exploratory works display.

Both series, while diverging in process and in overall aesthetic, demonstrate new inquiries on the part of the artist into indexicality. For the photo exposure works this inquiry arrives via acts of direct imprint of an object onto a light-sensitive surface while for the stitched works it arrives via the translation of gestural, expressive techniques of sketching and drawing to the mediated and systematic technique of embroidery.

Natasza Niedziolka (b. 1978, Miedzychod, Poland) lives and works in Berlin, Germany. Her work has been exhibited throughout Germany and Europe. Last year, the gallery presented a solo presentation of her work at the NADA, Cologne art fair. In The Party of Ghosts is the artist’s second solo exhibition with Horton Gallery.
---
Horton Gallery is pleased to announce a two-person exhibition of work by Brooklyn-based painter James Hyde and Chicago-based photographer Jessica Labatte.

Generating a revisionist model of painting, James Hyde’s “Glass Box” paintings appear simultaneously illusionistic and literal. The paint, paper, wood, and other materials used to make the painting aren't so much painting materials as physical surrogates for painterly activity. To imagine Hyde's “Glass Boxes” as sculpture would be to see them as slap-stick contraptions caught in the act of painting themselves into being. These works redeem themselves as painting through the magic of what Duchamp called "delay in glass". By this logic the dimensional contents of the box inhere as inscription on the frontal plane of glass. This way, the illusionistic flow of traditional painting is reversed-- instead of seeing space in a flat surface, Hyde's petri dishes of formalist tropes present his dimensional constructions flatly.

Also on view are works from Hyde’s “Istanbul Papers,” a series of a small works on paper completed over a two week period that the artist spent in Istanbul in 2011. Always interested in exploring the physical materiality of the two-dimensional painted picture, Hyde constructed these images using scavenged materials such as paper bags from local produce markets, acrylic ground from a building supply store, found pigments, white glue, and egg yoke. The simple, abstract, painted shapes of these works are sourced from medieval tile designs used throughout Istanbul.

Photographer Jessica Labatte’s work has been involved with the liminal space between photography, sculpture, and painting that can be generated through studio experimentations with reflective surfaces, light, color, and scale. Labatte creates color inkjet photographs of sculptural assemblages set up in her studio, but the resulting prints are never straightforward renditions. Rather, Labatte’s works are sophisticated abstractions that avoid the appearance of mindless Photoshop reverie by skillfully juxtaposing complex shapes and colors and by offering hints of the physical materials of her assemblages such as mirrors and cut paper.

These artists are clearly united by their bold challenges to the boundaries of two-dimensional representation, abstract painting, and sculpture. The use of clearly defined, basic shapes in both of the artists' work further demonstrates the persisting ability of contemporary artists to call into question acts of artistic representation, even using the seemingly most elemental, simplistic of visual forms.