'Requiem for War' is a landmark survey of Hans Burkhardt's war paintings. The exhibition features an extraordinary range of work from 1938 to 1993, in which Burkhardt employed his abstract expressionist symbolism to explore the furthest emotional ranges of his responses to, and perceptions of, war from the Spanish Civil War and World War II through the Vietnam War, Desert Storm, and the conflicts of Latin America and the Middle East. 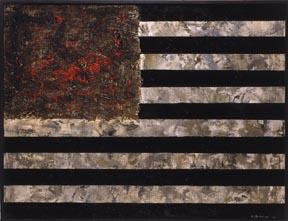 Los Angeles, CA. - In a poignant survey of an artist's life-long reflection on the subject, "Requiem for War: Paintings by Hans Burkhardt" will open at Jack Rutberg Fine Arts, 357 North La Brea Avenue in Los Angeles, Friday, July 11 and extends through September 13, 2003.

"Requiem for War" is a landmark survey of Hans Burkhardt's war paintings. The exhibition features an extraordinary range of work from 1938 to 1993, in which Burkhardt employed his abstract expressionist symbolism to explore the furthest emotional ranges of his responses to, and perceptions of, war from the Spanish Civil War and World War II through the Vietnam War, Desert Storm, and the conflicts of Latin America and the Middle East.

This exhibition is presented at a time when attention is increasingly being afforded art that deals with humanist issues, although relatively few artists directly confront war. While some major artists have addressed this subject, most notably Picasso in his "Guernica," their efforts stand as rare statements in their bodies of work. In this respect, Burkhardt may be unique. Well known for his celebratory expressionist paintings of the figure and landscape throughout the length of his long artistic career, Burkhardt also created in parallel an unique body of work reacting to man's violence against his fellow man. According to some historians, this body of more than two hundred paintings is unprecedented in its impact and scale.

Art historian and critic Donald Kuspit has called Burkhardt's paintings "among the greatest war paintings - especially modern war paintings, made." In a landmark and courageous show of Burkhardt's war paintings held in 1968 during the height of the Vietnam War at the San Diego Museum of Art, the late historian Dr. Eugene Anderson called Burkhardt "Goya's spiritual heir" who "metamorphoses the experience of war and violence into works of beauty" that "unites an exquisite appreciation of this world and a profound awareness of the nearness of the next world." In his 1991 essay on the artist's "Desert Storm" series, the eminent art historian and curator Peter Selz wrote that Burkhardt "has created some extraordinary paintings . . . executed with a masterful craftsmanship comparable to Goya's . . ."

Burkhardt's 'war paintings' have received considerable attention in recent years. They were the centerpiece of a 'politics and art' symposium and exhibition held at the 2002 Sundance Film Festival. Currently, as part of its "Disarming Parables" exhibition, the San Jose Museum of Art is showing (through June 29, 2003) Burkhardt's monumental painting "My Lai," which incorporates actual human skulls collaged onto the surface of the painting. Burkhardt will be included in the national touring exhibition, "Next Stop Vietnam: California and the Nation Transformed" organized and scheduled to open at the Oakland Museum, August 27, 2004.

Burkhardt was born in Basel, Switzerland in 1904. He emigrated to New York in 1924, where he shared Arshile Gorky's studio for the better part of the years 1927-37. When he moved to Los Angeles in 1937, Burkhardt represented the most significant bridge between New York and Los Angeles, in that his paintings of the 1930's are part of the genesis of American Abstract Expressionism. Selz has noted "while working alongside Gorky, Burkhardt met DeKooning or 'Master Bill', as he was called by Gorky. Born in 1904, they each arrived respectively from Armenia, Holland, and Switzerland. Simultaneously working in Greenwich Village, they discovered new ways of painting which would move art in America beyond European tradition." In 1992, two years before his death, Burkhardt was honored for his lifetime achievement by the American Academy and Institute of Arts and Letters.

Since his passing, Hans Burkhardt's works have been featured in numerous exhibitions in the U.S. Internationally, his works were recently included in a major exhibition at the Kunsthalle in Basel, Switzerland in an exhibition featuring the most important artists to have emerged from that city spanning nearly 600 years. The Irish Museum of Modern Art and the British Museum in London are among those institutions that have featured Burkhardt works in exhibitions of recent museum acquisitions. Burkhardt will be the subject of an exhibition celebrating the centennial of his birth organized by the Orange County Museum of Art running from September 2004 through January 2005.

"Requiem for War: Paintings by Hans Burkhardt" opens with a reception on Friday, July 11 from 7:00 to 9:30 p.m.. in conjunction with the launch of the L.A. International Invitational, the city-wide art event. The exhibition runs through September 13.

In related special events at the gallery, Peter Selz, author of the forthcoming book on politics in art, will present an educational discussion related to the Burkhardt exhibition on Friday, July 25, 7:30 p.m. Also on Friday, September 5 at 7:30 p.m., author Bram Dijkstra will discuss and sign his new book, Expressionism in America, which features Burkhardt's work. Other events to be announced.