28 recent (and many previously unseen) works including large scale paintings, sculptures and works on paper, drawn together from private collections around the world. 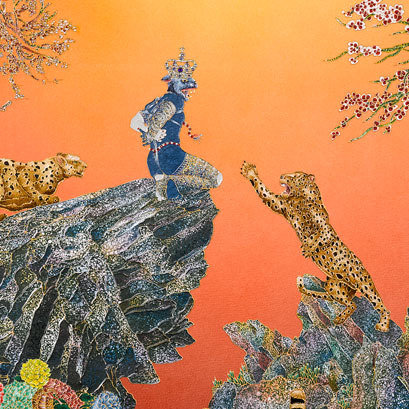 From 15 February 2013, Manchester Art Gallery will present Raqib Shaw’s largest solo exhibition to date. This major exhibition will feature 28 recent (and many previously unseen) works by the artist including large scale paintings, sculptures and works on paper, drawn together from private collections around the world.

Thanks to the extraordinary generosity of the artist, Manchester Art Gallery will be transformed with flower installations. Inspired by Shaw’s passion for flowers and plants, his studio will create sculptural interventions of willow and driftwood planted with spring bulbs and the exterior of the gallery will appear to be in bloom for the duration of the show. As part of Shaw’s gift to the city, an exhibition launch party, La Nuit d’Amour, takes place on Valentine’s night, Thursday 14 February from 6-9pm.

Shaw is creating a major new painting for this exhibition, in response to George Stubbs’ Cheetah and Stag with Two Indians, one of the most popular works in the gallery’s collection. This stunning yet provocative work will be displayed alongside Stubbs’ original painting in the 18th century collection gallery.

Other major works on display will include Adam, a painted bronze overlaid with black diamonds, sapphires and rubies. The show will also feature a selection from Shaw’s recent series Of Beasts and Super-Beasts, first shown in Paris in 2012. These glitter and rhinestone encrusted acrylic works on paper feature incredibly detailed creatures and still lives drawn from the artist’s imagination and highlight Shaw’s passion for drawing.

Raqib Shaw is an Indian-born, London-based artist who shot to fame in the international art world at the age of just 33. His opulent paintings and sculptures evoke the work of Old Masters such as Holbein and Bosch in their treatment of often unsettling subjects. But they also reflect the ornate style of Persian miniatures and Kashmiri and Japanese textiles. Beneath their beautiful jewel-like surface is a collection of dark and violent images inspired by ancient myths and religious tales from both East and Western tradition. The exhibition is collaboration between Manchester Art Gallery and Rudolfinum Prague. There will be a full colour publication to accompany the exhibition with an essay by Professor David Lomas.

Raqib Shaw was born in Calcutta and lived in Kashmir for many years. He studied for both his BA and MA at Central St Martins School of Art. He shot to fame at the young age of 33, when his painting Garden of Earthly Delights III was exhibited in a group exhibition, Without Boundaries, at The Museum of Modern Art, New York. Major solo exhibitions include Museum of Contemporary Art, Miami (2006), ‘Art Now’, Tate Britain, London (2006), The Metropolitan Museum, New York (2008), White Cube Hoxton (2009) Kunsthalle Wien (2009), White Cube Mason's Yard (2011) and Galerie Thaddaeus Ropac, Paris (2012). Shaw has also exhibited in group exhibitions including ‘Without Boundary’, MoMA New York (2006), ‘Around the world in Eighty Days’, ICA London (2006), ‘6th Gwangju Biennale’, South Korea (2006) and 17th Biennale of Sydney (2010). Shaw is also included in the 7th Asia Pacific Triennial of Contemporary Art (2012) and the Manchester Art Gallery exhibition will tour on to the Rudolfinum in Prague opening 6 June until 15 October 2013.

Manchester Art Gallery is one of the Northwest's most popular cultural venues. Located in the heart of the city, it hosts a world-renowned collection of fine and decorative art and in addition to outstanding collection displays, delivers an ambitious program of temporary exhibitions that bring world- class historic, modern and contemporary art to the city.

4:45 - 6pm: Sir Norman Rosenthal will talk about Raqib Shaw's work and introduce a short programme of music and dance to start the evening's celebrations
6:00 - 8:00pm: Celebratory party and preview of the exhibition
8:15 - 10:00pm: Indian buffet served in the Manchester Art Gallery restaurant