In the "Bon Travail" exhibition ten artists question the position of the apparent opposite poles of "work" and "non-work" (or free time). With bittersweet humour they stand up for the right to be lazy; the exhibition interprets labour as a (political) performance. "Fiction = Fixation" attempts to draft a movement within Danny Matthys' oeuvre, but also critically explores the notion of photography in his video work. "New Acquisitions in the Black Box": an authentic kaleidoscope of genres and themes with video works by Belgian and international artists. 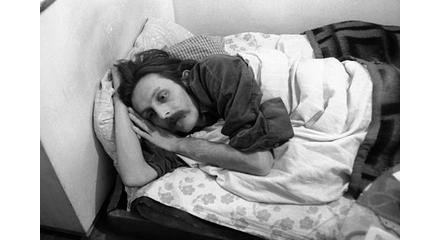 How do artists view the role of work in our society? What part does work play in our lives? In the 'Bon Travail' exhibition ten artists question the position of the apparent opposite poles of ‘work’ and ‘non-work’ (or free time). With bittersweet humour they stand up for the right to be lazy. Their seemingly pointless but playful actions illustrate the fact that work can be utterly absurd, or show that compulsory work can be deployed as an instrument of political power that leads to subjection. Ranging from the spectacular to the intimate, the exhibition interprets labour as a (political) performance. The notion of ‘non-work’ is considered to be of equal worth, as a factor for freedom that contributes to the quantity and quality of both the product of work and of life itself. 'Bon Travail' presents a number of the works used in 'brouillon' in a completely different context: the ‘fixed’ layout of an exhibition.

27.03.2013 - 7:30 p.m.
Laziness: The Last Taboo
On the occasion of the group exhibition Bon travail (02 March - 07 April 2013) Argos invites two thinkers who discuss the subject of laziness in contemporary society. For Laziness: The Last Taboo philosophers Isabelle Stengers (Université Libre de Bruxelles) and Petra Van Brabandt (Sint Lucas Antwerp) engage in a debate about our ambiguous position on laziness. What does our view of laziness imply with regard to the subject of work, pleasure, the contemporary production and consumption model and our being mortal?

In the exhibition Danny Matthys - Fiction = Fixation, argos discloses a selection of video works produced by Danny Matthys (1947) between 1975 and 1985: these works are part of the Argos collection and have been recently digitized in collaboration with Packed - Centre of Expertise in Digital Heritage.

The oeuvre of Danny Matthys embraces different media. Since the end of 1960s, Matthys experiments in an analytical and conceptual way with Polaroids, paintings, photographs, assemblages, film and video installations. From the mid-1980s, he abandons videos and he mainly devotes, in collaboration with his partner, to painting.

Fiction = Fixation attempts to draft a movement within Matthys' oeuvre, but also critically explores the notion of photography in his video work. Starting from the visual tautology of Closed Letter & Number Series (1975) - where a hand is dialing all the numbers on an telephone, from 0 to 9, and another pair of hands is typing all the letters of the alphabet on an old typewriter – till the theoretical dissertation of De la fiction en photographie (1984), Danny Matthys investigates the media and blurs the boundaries between discourse and performance.

Although the ironic and playful allusions, his approach is systematic: in Internationale video manifestatie (1977) and 2.(9+1) Polaroid Colour Pictures/Prints (1976), Matthys takes Polaroid pictures of the framed settings and every few minutes a new the picture is stuck on the monitor until the monitor is completely covered: in this way, photographs and videos dialogue in a loop that stops when the TV-set is saturated.

World Beauties (1983-1984) reveals an endeavor to grasp meaningful elements of the world: four women - Eline stands for the turn of the century, Eveline for the 30ies, Monique for the 50ies and Jordan for the 70ies – symbolize the 20th Century and re-enact the tradition. These scenes are recorded on video, but also fixed on four large photographic assemblages.

On contrary, in De la fiction en photographie – released at the occasion of the International Symposium about Photography in Venice, in 1984 – Matthys keeps literarily aside and lets the philosopher Paul Willemarck reading a theoretical text about photography. Matthys edits the recording of the reading with snapshots of the framing or photographs taken in Venice, while he points remarkable concepts by using inter-titles.

Matthys records traces of something that happened, he marks the differences within the repetitions of the gesture and, finally, Fiction = Fixation could be understood as an example of what is called indexical art. (AC)

Along with the main exhibitions, Argos is delighted to present - on a weekly basis - recent acquisitions from the Argos collection. This selection highlights works released between 2009 and 2013 directed by Belgian and international artists.
The program alternates individual titles and thematic screenings. In this way, Argos discloses recent video productions that, on the one hand, investigate current issues while, on the other hand, illustrate the different artist practices and approaches.
An authentic kaleidoscope of genres and themes with video works by Jan Dietvorst & Roy Villevoye, Emily Vey Duke & Cooper Battersby, Pieter Geenen, Ken Kobland, Steve Reinke & Jessie Mott, Shelly Silver & Frances Richard, Krassimir Terziev and Jan Vromman.