This is not an exit. The artist returns to the medium of oil painting. However the primary source material - magnified images drawn from the pages of glossy magazines - is a simple metaphor, one part of a prism conceived to examine moral questions provoked by the excessive binge culture that preceded the global financial crisis. 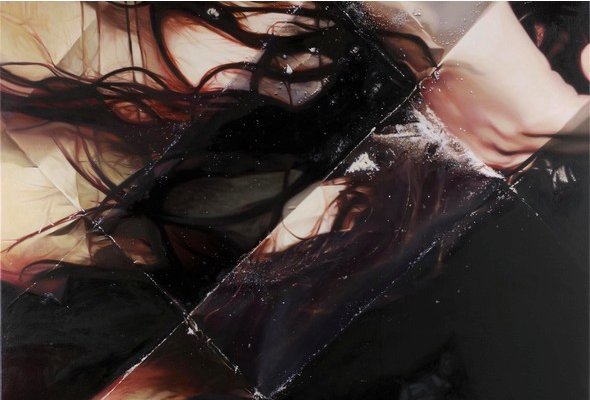 For his second solo exhibition at Blain|Southern, THIS IS NOT AN EXIT, the British artist Mat Collishaw returns to the medium of oil painting. However, as is usual with his practice, nothing is literal; the primary source material - magnified images drawn from the pages of glossy magazines - is a simple metaphor, one part of a prism conceived to examine moral questions provoked by the excessive binge culture that preceded the global financial crisis.

When seen from a distance, these large-scale works appear to be abstract paintings constructed on a classic modernist grid; closer inspection reveals them to be scraps of advertisements for luxury goods culled from ‘lifestyle’ magazines like Tatler and Vogue. But this is only partially the case; they are in fact facsimiles of the precisely folded, origami-like ‘wraps’ used by drug dealers to package cocaine, complete with powdery traces of the narcotic.

Our susceptibility to sensational imagery has long been central to Collishaw’s work, and these sumptuous paintings continue this tradition. For all their apparent swagger, they are in reality depictions of nothingness, revealing the symbiotic space that exists between illusion and reality, absence and presence. More prosaically, they are emblematic of the craven, insatiable aspect of human nature that will pursue something to its very end whatever the consequences, and yet inevitably remain unfulfilled. It is this unending vicious cycle to which Collishaw alludes in the exhibition’s title; there is no escape – this is not an exit – the words used at the close of Bret Easton Ellis’ novel American Psycho, which satirised the excesses of Wall Street in the 1980s.

As with all of Collishaw’s oeuvre, multiple layers of meaning exist; the grid structure teasingly feeds into the theories propounded by the French philosopher Gilles Deleuze in his seminal work The Fold, in which he argues that the world can be interpreted as a body of infinite folds and surfaces that twist and weave through compressed time and space. Meanwhile, in taking magazine images first used to advertise consumerist dreams, then for selling cocaine, and finally as artworks hanging on the walls of a commercial gallery, Collishaw offers a wry comment on the all-devouring nature of capitalism.

His use of trompe l’oeil, making the squares of paper appear three-dimensional, meditates further on the idea of illusion and reality, while his harnessing of the geometric styles of Modernist painting contradict this. Indeed, Collishaw sees the exhibition, in part, as a debasement of the medium of painting, the most traditional art historical medium.‘You can’t just paint – you have to address the whole history of painting and then make some sort of paradigm shift,’ he says. ‘I’ve been trying to find a way to do this, and this is my solution.’

THIS IS NOT AN EXIT will be marked by the most comprehensive publication of Collishaw’s practice to date, including an essay by art historian Sue Hubbard and interview by Rachel Campbell-Johnson.