The Bride and the Bachelors

Duchamp with Cage, Cunningham, Rauschenberg and Johns. Philippe Parreno has devised the exhibition's mise en scene, activating time and movement to create a vital way of experiencing the work of the five featured artists - invoking the notion of the ghost, existing between presence and absence. Part of Season Dancing around Duchamp. 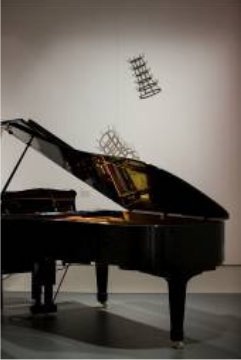 Examining one of the most important chapters in the history of contemporary art, The Bride and the Bachelors is the first exhibition to explore Marcel Duchamp’s (1887–1968) impact on four great modern artists – composer John Cage (1912–1992); dancer and choreographer Merce Cunningham (1919–2009) and visual artists Robert Rauschenberg (1925–2008) and Jasper Johns (born 1930). Tracing their creative exchanges and collaborations the exhibition features twenty-five works by Duchamp, and more than thirty by Johns and Rauschenberg, as well as music by Cage and live dance performances of Cunningham choreography. The Bride and the Bachelors: Duchamp with Cage, Cunningham, Rauschenberg and Johns is organised by the Philadelphia Museum of Art in association with Barbican Art Gallery.

The exhibition is curated by Carlos Basualdo in collaboration with Erica F. Battle. International contemporary artist Philippe Parreno has devised the exhibition’s mise en scène, activating time and movement within the exhibition to create a vital way of experiencing the work of the five featured artists – invoking the notion of the ghost, existing between presence and absence. The varied sequence of Parreno’s subtle orchestration of live and pre-recorded sound, arranged in concert with live dance performances, enables the exhibition to change over time. The Bride and the Bachelors opens 14 February 2013.

Encountering Duchamp and his work in New York during the early stages of their own careers, each of the younger American artists embraced key elements of his ideas and practice, creating a seismic shift in the direction of art in the late 1950s and 1960s, which still resonates today. Often cited as being the father of conceptual art, Duchamp radically altered what we think of as art – employing chance and humour, questioning the tastemakers and perhaps most radically of all, creating works of art from everyday objects.

Jane Alison, Senior Curator, Barbican Art Gallery, said: “We are delighted to be working with Philadelphia Museum of Art to present this important exhibition that includes such a rich selection of influential works by Duchamp, Rauschenberg and Johns – many of them never shown in the UK before – alongside music by Cage and live Cunningham dance performances within a mise en scène developed by contemporary artist, Philippe Parreno. ‘The Bride and the Bachelors’ builds on Barbican Art Gallery’s critically acclaimed 2011 exhibition ‘Laurie Anderson, Trisha Brown, Gordon Matta-Clark: Pioneers of the Downtown Scene, New York 1970s’ which saw dancers turn our vast downstairs space into a living sculpture. In art historical terms, the exhibition follows on from our recent ‘Bauhaus: Art as Life’ show; Cage, Cunningham and Rauschenberg first met at Black Mountain College, where the influential Bauhaus teacher Josef Albers continued his radical pedagogic legacy. The Barbican also has a long-standing relationship with the former Merce Cunningham Dance Company and the John Cage Trust and so it is with enormous pleasure that we can reassess their work afresh in a gallery context.”

The Bride and the Bachelors includes Duchamp’s legendary masterpiece Nude Descending a Staircase (No. 2), 1912, which caused uproar exactly 100 years ago at the New York Armory Show. His first ‘readymade’, a bicycle wheel mounted on a stool was realised that same year in his Paris studio and a replica version is presented alongside other ‘readymades’ such as Fountain, 1950 (the earliest replica of the 1917 original) and Bottlerack,1960 (this version was a present to Robert Rauschenberg).

Also on show are eighteen works by Rauschenberg, mostly from the 1950s and early 1960s – the majority never, and others rarely shown in London before including two influential White Paintings from 1951 and 1952, which parallel Cage’s most famous work, 4’ 33”, 1952. Johns is represented by seventeen works, including paintings No, 1961 and M, 1962. This is the most significant showing of Johns’ work in the UK since the early 1990s and of Rauschenberg’s in the last 30 years.

At the centre of The Bride and the Bachelors is an exploration of Duchamp’s enigmatic ‘Bride’, featuring the painting Bride, 1912 and the iconic The Bride Stripped Bare by Her Bachelors, Even (The Large Glass), 1991–92 replica of the 1915–23 original. In her orbit are major early works by Rauschenberg and Johns; most crucially, Rauschenberg’s Bride’s Folly, 1959 – never previously shown in England – and Johns and Cunningham’s homage to Duchamp, Walkaround Time, 1968, based on The Large Glass. Also shown on the lower level gallery are Rauschenberg’s painting Express, 1963 and stage set Tantric Geography designed for Cunningham’s Travelogue, 1977; neither of which have been shown in this country before.

At weekends and on Thursday evenings, the ‘Bride’s’ domain will be animated by Cunningham choreographies; staged in association with London Contemporary Dance School and Richard Alston Dance Company. Often considered the dance versions of Duchamp’s ‘readymades’, these performances will be made up of sections taken from repertory pieces drawn from collaborations with Duchamp, Johns, Cage and Rauschenberg. The live dance component of the exhibition is curated by former Merce Cunningham Dance Company dancer and rehearsal assistant, Jeannie Steele, and is presented in association with The Place with the assistance of Richard Alston Dance Company and London Contemporary Dance School, and the generous support of the Merce Cunningham Trust. ‘Ghost dancers’ – recordings of the dancers performing Cunningham pieces – can be heard through the rest of the week as part of Parreno’s soundscape for the exhibition. In addition, on five afternoons visitors have the rare opportunity to listen to live Cage music played by contemporary pianist and interpreter of Cage, Eliza McCarthy.

On the upper level, further sections include works devoted to chess, chance and the ‘readymade’. Highlights include: Duchamp’s Bicycle Wheel (1964 replica of 1913 original) and With Hidden Noise, 1916 shown alongside Johns’ seminal Painted Bronze (Ale Cans), 1960, Rauschenberg’s Music Box, c.1953 and his first stage set for the Cunningham Dance Company, Minutiae, 1976 (replica of 1954 original).

The exhibition has been developed with the full co-operation of Jasper Johns, The Robert Rauschenberg Foundation, the John Cage Trust, the Merce Cunningham Trust and Association Marcel Duchamp. Special ticketed dance events taking place in the gallery setting include Cunningham’s RainForest, 1968, presented by Rambert Dance Company and Richard Alston Dance Company performing a Cunningham ‘Event’. Both are followed by a Q&A with Mark Baldwin and Richard Alston respectively.

Dancing around Duchamp is a major multi-disciplinary season of events across visual art, dance, theatre, film and music. The season orbits around the legendary figure of Marcel Duchamp and the Art Gallery’s major new exhibition The Bride and the Bachelors: Duchamp with Cage, Cunningham, Rauschenberg and Johns organised by the Philadelphia Museum of Art and in association with Barbican Art Gallery. A uniquely Barbican offering, it brings together key figures of the avant-garde with a shared Dadaist or absurdist sensibility who changed the course of 20th-century art: Samuel Beckett, John Cage, Merce Cunningham, Marcel Duchamp, Eugène Ionesco, Alfred Jarry, Jasper Johns, and Robert Rauschenberg, along with a host of contemporary practitioners that continue their radical legacy.

Showcasing work by different generations of artists and performers – precursors, collaborators and artists either inspired by or with a clear affinity to Duchamp’s work – the season allows audiences to explore the many threads that connect them and to journey among the absurd, the subversive, the provocative and the darkly humorous.

A fully illustrated book published by the Philadelphia Museum of Art and Yale University Press accompanies the exhibition. It includes an introduction by Carlos Basualdo, The Keith L. and Katherine Sachs Curator of Contemporary Art, and Erica F. Battle, Project Curatorial Assistant, Modern and Contemporary Art from the Philadelphia Museum of Art; a new essay by Calvin Tomkins, critic for the New Yorker; and profiles of the artists on view. It also features an anthology of reprinted articles, critical essays, excerpts, correspondence, and interviews that map the artists’ relationships and are selected by Reinaldo Laddaga, musician and Associate Professor of Romance Languages at the University of Pennsylvania; and the first-ever chronology detailing the lives and interactions of all five artists by Paul B. Franklin, Editor in Chief of the annual journal Étant donné Marcel Duchamp. Price: £35. ISBN: 9780876332429.

Supported by The Henry Moore Foundation, the Fluxus fund with the support of the Institut français, and The Idlewild Trust, with in-kind support from Yahama, Markson Pianos and Sound Network.