By using photography and historical documentation, 'Border Theories' investigates the relationship between architecture, politics and history in three Russian cities. Somers recorded these cities with an eye for the urban planning experiments of the past. 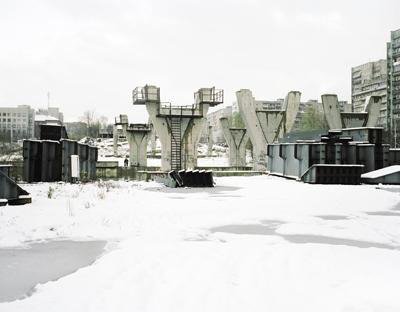 It is with great pride that Stedelijk Museum Bureau Amsterdam announces the solo exhibition by Elian Somers. By using photography and historical documentation, Border Theories investigates the relationship between architecture, politics and history in three Russian cities. In the 20th century Birobidzhan, Kaliningrad and Yuzhno-Sakhalinsk were designed, built and redeveloped under the Soviet regime, with the utopian vision of a socialist city as the guiding principle. By examining their development, Somers reveals how visions of urban planners, nourished by political convictions, could control but never fully overwrite a city and its history. Coincidentally the exhibition is held in the Netherlands-Russia year, in which both countries deepen and intensify their relations.

Somers recorded these cities with an eye for the urban planning experiments of the past. Rather than using photography as a vehicle for architectural idolatry, she places her photographic observations in the context of archival material, text fragments and urban designer's plans. In this way she unfolds an account of how architecture is employed as a political instrument, to rewrite history in an urban landscape. Border Theories brings to light the several political agendas that lie behind these specific cities, but are not always equally visible or expressly present on the surface.

All the blueprints and urban planning visions that were developed over the course of time from different political convictions all conflict with one another, and are selectively erased or deployed. Here Somers’s investigation touches upon a practice that is still very much with us today, because any succession of urban planning projects is ultimately a reflection of constantly changing political ambitions. Border Theories can be seen as a collection of such aspirations, and ultimately poses the question: from what convictions are cities and buildings designed and built, and how are these convictions made visible or, on the contrary, hidden?

During the exhibition, together with the lecture of Dr. Bert Hoppe, Elian Somers's book Border Theories will be presented. This publication is the result of the artistic investigation Somers undertook into the interplay of ideology, history and urban planning in three cities on the extreme boundaries of Russia. Photographs and texts cast light on the shadowy zone between plan and reality in Birobidzhan, Kaliningrad and Yuzhno-Sakhalinsk, and the way in which urban planning is employed as a political instrument to write – and rewrite – history in the landscape.

Elian Somers (1975, Sprang-Capelle, The Netherlands) took her Masters in Architecture at the University of Delft and her Masters in Photography at AKV|St. Joost in Breda. Her photographic work is often a component of a long-term project in which she investigates the ideological foundations and history of an (urban) landscape. In these projects she frequently makes connections between photography and texts and other archival material, for instance to reflect on the modernistic utopia. Recent group exhibitions in which her work has appeared include 'Between The Map and The Territory', TENT, Rotterdam; 'Learning from... Rotterdam', Kunsthalle Wilhelmshaven, Wilhelmshaven, Germany (2012).

The work Border Theories has been made possible by the Mondriaan Fund.

The lecture of Bert Hoppe is kindly supported by the Goethe Institut.