Since its establishment in 1988, the Generali Foundation has steadily built up a collection of contemporary art that now enjoys an international reputation. Works by Dan Graham, Sanja Ivekovic, Hans Haacke, Friedl Kubelka and Harun Farocki. 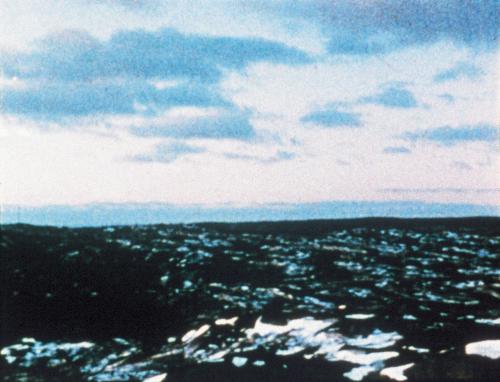 Since its establishment in 1988, the Generali Foundation has steadily built up a collection of contemporary art that now enjoys an international reputation. The collection's highly distinctive character results from its focus upon selected artists in connection with specific themes. An essential feature of these works is their critical approach, manifested both in form and content, to socio-political issues, the role of the media, and, naturally, questions related to art. This year's fall exhibition is conceived as a close-up of the Generali Foundation Collection and presents newly acquired works by five artists.

The Å“uvre of the influential American artist Dan Graham (1942, Urbana/USA, lives in New York) explores the relationship between social space and the individual. In his early film installations, he examines the perception of space and time, and the awareness of physicality in mediated interaction. "Sunset to Sunrise" (1969), "Binocular Zoom" (1969/70), "Roll" (1970), and "Helix/Spiral" (1973) will be shown in Austria for the first time, complemented by a presentation of "Body Press" (1970-72).

Sanja Ivekovic (1949, Zagreb/CRO) is one of the first explicitly feminist artists to have emerged from former Yugoslavia. In her serial photo montages "Double Life" (1975), "Tragedy of a Venus" (1975), "Bitter Life" (1975), and "Sweet Life" (1975/76), she juxtaposes media images with private pictures that contain parallels in poses and props. Inscribing herself into the public discourse, Ivekovic thus makes visible collective social codes of behavior and their origins in the gender-specific, standardized patterns employed by mass media.

Hans Haacke (1936, Cologne/GER, lives in New York) defines his art as an analysis of, and reflection on, social structures. In the early seventies he carried out a series of polls involving visitors of public art galleries. During the exhibition "Directions 3: Eight Artists" at the Milwaukee Art Center, a "Visitors' Profile" (1971) was compiled, which will now be presented for the first time.

In her conceptual photographs and films, the Austrian artist Friedl Kubelka (1946, London/UK, lives in Vienna) questions the (self) portrait as a means of pictorial representation. The project "Year's Portraits", in particular, carried out every five years since 1971, illustrates her personal approach to notions of identity and its construction. In addition to analyzing the object, Kubelka further undertakes a formal examination of the media photography and film.

As a critical observer of political and cultural developments, the German "auteur filmmaker" Harun Farocki (1944, Novi Jicin/CZE, lives in Berlin) has been exposing the hidden content of media images in their various codes. A principal focus of his inquiry is the connection between image-production, distribution, and reception. The exhibit will range from the early "guerilla film" "Inextinguishable Fire" (1969) to documentary films like "How to Live in the FRG" (1990) to more recent productions such as "Eye Machine 12 (2001). In addition to Farocki's films displayed in the form of a comprehensive video archive, the two highly debated video installations from the collection will be on view.