Jill Baroff, David Bartel & Yves Seban, Richard Galpin, Tayo Heuser, Katrin Sigurdardottir, Ken Solomon. With intense attention, patience, and precision, microwave documents the relentless propagation of an obscene activity. The ob-scene, is what cannot be brought on to the stage. In Greek tragedy the chorus narrates these unpresentable events. 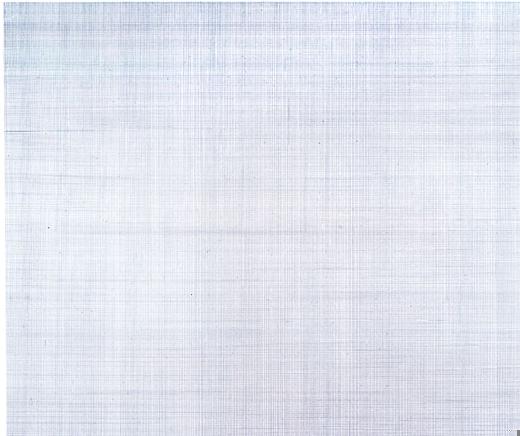 With intense attention, patience, and precision, microwave documents the relentless propagation of an obscene activity. The ob-scene, is what cannot be brought on to the stage. In Greek tragedy the chorus narrates these unpresentable events. In the last couple of years the process has been reversed, our daily routine is flooded with obscenities. Shortsighted censorship declares sex obscene while promoting war in real time, reality TV and the macro drama. In an arena dominated by the obscene, delicacy has become subversive.

Jill Baroff
In her Tide drawings, Jill Baroff meticulously registers the repercussions of real life waves and turns them into micrographs. Having downloaded tide tables from the Internet, she plots the information onto a square grid. The technique is utterly rational: a grid drafted with ink on paper, but its rational structure loosens due to the complex treatment of the Japanese gampi she uses, whose surfaces lodge innumerable micro-events produced by the stretching and mounting of the translucent paper. The eye navigates a maze of limitless variations of textures, scratches and intermittent lines; imperceptible changes of color and densities animate the drawings with infinite vibrations, and the insignificant waves inaugurate a durable vertigo.

David Bartel & Yves Seban
Quatuor a Codes is a collaboration between French artists David Bartel &Yves Seban. It is an interactive sound installation where visitors are invited to scan hundreds of bar codes posted on the gallery wall. The sounds triggered by the scanning guns are mixed by custom software developed by David Bartel and the result is broadcast in real time. The bar codes are grouped into four sound zones: voice samples; percussion; abstractions/beats; melody/harmony. The mixing is in constant evolution and the results are never repetitive even when the same bar code is scanned twice. The encrypted information usually used to speed up the check out process in retail stores becomes a graphic rhythm allowing access to a multi-layered musical experience where people interact.

Richard Galpin
He builds images by altering and removing data. He uses photographs of complex urban structures which he strips of their contents. Fragmented elements are left to the viewer to piece together evidence of the previous image. The works for microwave, four, from his Scaffolding Series are based on c-prints of building facades that have been meticulously scored and peeled to remove certain areas of the surface emulsion. Everything except the intricate networks of the scaffolding structures has been erased and the resulting images are complex abstractions.

Tayo Heuser
Composed of grid-based patterns that suggest genetic engineering, textile designs or nervous systems, Tayo Heuserâ€™s intricate drawings encode the world. Through the endless repetition and weaving of the same components, she accumulates signals, vibrations and variations impossible to detect without an extraordinary level of attention. The minimal variations in her large-scale (8 x 4 feet) drawings relate to structures, colors, textures and rhythms on paper.

Katrin Sigurdardottir
Icelandic artist Katrin Sigurdardottir explores the boundaries between geography and biography. She uses the scale and materials of model making such as architectural scale lumber, wire mesh, miniature vents and light bulbs, artificial grass and asphalt. Her hybrid structures, â€œcorridor/riverâ€, â€œisland/roomâ€, â€œlandscape/crateâ€ articulate an experience of place and scale that always seems to exceed the specificities of location and personal memory. 48 Columbus is a model of the second floor hallway of the postwar apartment building where she resides. Although the walls are accurate, the overall floor plan, broken up and jagged, replicates the shape of the JÃ¶kulfÃ  Ã  FjÃ¶llum river in Iceland. Her â€œlandscapes in a boxâ€ are small wood shipping crates whose interiors are miniature models of fictional and remembered parks and cityscapes.

Ken Solomon
The Aging Project- Part I (2000 - 2003)
two and a half minute video
Brooklyn based artist Ken Solomonâ€™s work is about the limitless range of interpretation of the same thing. Time is the variable for the two video works he presents. The Aging Project Part I, (2000-2003), records the process of getting older. Every day the artist photographs himself against the same neutral backdrop. Three years is reduced to 2 1/2 minutes (1 second per week). The Aging Project is about endurance and patience as much as it is about time and change, as the daily process of documentation will continue for the rest of his life. In 10 Hours on the First Car of the L Train, a 2 minutes video, the artist sits in the same subway car for a full day clandestinely documenting the life of four adjacent subway seats across from him. He takes a snapshot each time a new person sits down or gets up depicting the chain of interaction that links complete strangers.