Yoshitomo Nara, arguably one of the most enthralling of this generation of Japanese contemporary artists. Dale Kistemaker presents First Sightâ€“An Encyclopedia of Childhood. Initiating the Curve Series is Tara Donovan, a sculptor who transforms massive amounts of ordinary materials such as electrical cable. 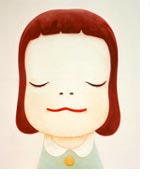 
Yoshitomo Nara
Nothing ever happens

Arguably one of the most enthralling of this generation of Japanese contemporary artists, Yoshitomo Nara distinctively offers a universal and touching psychological narrative of childhoodâ€“a time when family pets were huge and frightening, other kids were equally overwhelming and the world seemed as awe-inspiring and bizarre as Aliceâ€™s trips through Wonderland. Featuring an impish cast of wide-eyed and devilish children and their larger-than-life pets, Naraâ€™s paintings, sculptures and drawings highlight the manic fear, anxiety, simplicity, fantasy and escape that define childhood and leave their mark on the adult psyche.

ABOUT THE ARTIST
Yoshitomo Nara was born in 1959 in Aomori Prefecture, Japan. Nara, who currently lives and works in Tokyo, received his B.F.A. (1985) and an M.F.A. (1987) from the Aichi Prefectural University of Fine Arts and Music. Between 1988 and 1993, Nara studied at the Kunstakademie Dussledorf, in Dusseldorf, Germany. Nara has exhibited widely in his native Japan and abroad. In the United States, he gained national attention as part of the popular group exhibitions, Super Flat (Museum of Contemporary Art, Los Angeles, 2000); My Reality: Contemporary Art and the Culture of Japanese Animation (Des Moines Art Center, 2001), which traveled to the Akron Art Museum in Fall 2002 and Almost Warm and Fuzzy: Childhood and Contemporary Art, (Des Moines Art Center, 2001) which was recently exhibited at MOCA Cleveland in Fall 2002. Nara has had nearly 40 solo exhibitions since 1984. He is represented in NYC by Marianne Boesky Gallery and in Los Angeles by Blum & Poe.

Dale Kistemaker
First Sightâ€“An Encyclopedia of Childhood
Imagine suddenly receiving a mysterious series of packages from your mother and opening them to find the meticulously preserved remnants of your childhood. This is precisely what started Dale Kistemaker on the project that has become First Sightâ€“An Encyclopedia of Childhood. A photographic time capsule, Kistemakerâ€™s images document this treasure trove of objects his parents saved from his youth including clothing, toys, books, games, music lessons, model railroads, etc â€“ and yet his process (each print is a life-sized rendition of the object centered in the frame without any outside context) removes any sentimentality or nostalgia. Through Kistemakerâ€™s objective photographic style, this autobiographical source material takes on the quality of collective memory as well as the familiarity of these remnants of childhood. Kistemaker creates an atlas, or encyclopedia of childhood that evokes both personal history and collective experience.

ABOUT THE ARTIST
Dale Kistemaker was born in Cleveland, Ohio, in 1948. He received his MFA from San Francisco State University in 1975 and has been a Professor at SFSU since 1988. His solo exhibitions include Allen Memorial Art Museum, Oberlin, Ohio and the International Center of Photography, New York. His work is included in the collections of the Los Angeles County Museum of Art; Fundacio Raphael Tous Dâ€™Art Contemporani in Barcelona, Spain; the San Francisco Museum of Modern Art and the Oakland Museum in Oakland, California.

Tara Donovan
Curve Series
Initiating the Curve Series is Tara Donovan, a sculptor who transforms massive amounts of ordinary materials such as electrical cable, stacked tar roofing paper, Elmerâ€™s glue, and toothpicks or pencils by the thousands, into installations that yield surprising and completely unpredictable effects. Nebulous, 2002, for example, an undulating and atmospheric floor piece, was made by twisting and wrapping miles of Scotchâ„¢ tape. Colony, 2001 consists of 18,000 pencil fragments. Donovanâ€™s most recent work, Haze, 2003, is a 16â€™ high by 40â€™ long wall sculpture made of plastic drinking straws. Donovan will create a new work for MOCA with a myriad of paper plates.

ABOUT THE ARTIST
Donovan received her B.F.A. in 1991 from the Corcoran College of Art and Design and her M.F.A. from Virginia Commonwealth University (1999). Her work has been shown at the Corcoranâ€™s Hemisphere Gallery, included in the Whitney Biennial (2000), and in 2003, featured in a one-person exhibition at Ace Gallery in New York. Donovan has upcoming exhibitions at the Rice Museum in Houston (Nov. 2003) and at Akira Ikeda, Berlin (2004).