Conceptual Art in Canada: The 1960s and 70s. The exhibition sets out to accentuate the discursive potential that evolves from a local vantage point and that prompts fundamental questions associated with a topographical situation. It will display the work of nearly 100 artists, important Canadian protagonists such as General Idea, Jeff Wall, Ian Wallace, but also American and European artists who realized important pieces in Canada during this time. 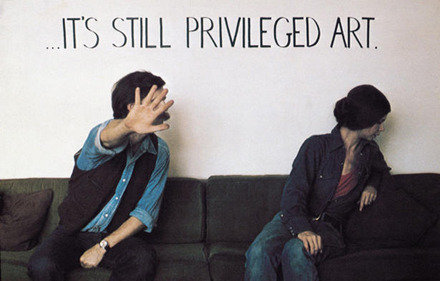 From April to September 2013, Badischer Kunstverein is hosting a major exhibition and events project on conceptual art in Canada, specifically, the period of art history between the years 1965 and 1980. This exhibition is the first comprehensive presentation of Canadian conceptual art in Europe and will display the work of nearly 100 artists on all three floors of the Kunstverein. The featured artists include important Canadian protagonists such as General Idea, Garry Neill Kennedy, Ken Lum, N.E. Thing Co, Michael Snow, FrançoiseSullivan, Jeff Wall, Ian Wallace and Joyce Wieland, but also American and European artists who realized important pieces in Canada during this time and had a lasting effect on conceptual art there, such as Bas Jan Ader, John Baldessari, Sol LeWitt, Martha Rosler, and Robert Smithson.

CONTINENTAL DRIFT is devoted to a significant and hitherto underrepresented period in Canadian art production. The exhibition assembles works of art and materials from a broad array of archives and museum holdings, as well as from artists’ and private collections. It enables light to be shed on some of the most unique characteristics of Canadian conceptual art– especially the role of artists’ collectives and artist-run centre networks, but also the deep influence of Canadian media theorist Marshall McLuhan. Involving a broad spectrum of different materials, ranging between video, film, print, and new media, the exhibition highlights artistic practices that have been particularly significant within Canadian contemporary art, but which have also repeatedly engaged with international developments.

The thematic approach of CONTINENTAL DRIFT is reflected by five intertwined chapters, several of which will evolve halfway through the exhibition’s duration and new chapters will be added and introduced in late June as part of the second project half. In its early stages, the exhibition will be dedicated to the artistic exploration of geography, mapping, landscape,and sites. Due to the vastness of the Canadian landmass, these themes have manifested in intellectual pursuits throughout the country. The political implications of language, communication, and discourse are the focus of a second large constellation of artworks. In Canadian conceptual art, the “linguistic turn” came to be decisively impacted by American culture and ideology, but also by the prevalent “English-Canadian” influences, most especially in the francophone province of Quebec. A third chapter centers on the critical scrutinization of conventional approaches taken in teaching and pedagogy with a view to the alternative concepts applied at the Nova Scotia College of Art & Design (NSCAD) in Halifax, – one of Canada’s premier art colleges, which has long been closely tied to conceptual art throughout North America.

During the second half of the exhibition’s run, two further points of thematic focus will be added. First, the relationship between conceptual art and body politics will be discussed against the backdrop of feminist, civil rights, and queer strategies. Second, the intensification of artists’ networking activities and collaborative projects will be thematized, which included alternative publishing projects and independent project spaces, but also art-related para-entrepreneurial undertakings.

An extensive events and discussion program runs parallel to the exhibition. Each thematic complex will be accompanied and marked by an element of intensification through guest lectures, artists’ talks, seminars, concerts, performances, or film screenings. To this end, artists, theorists, and critics from Canada and all over the world will be invited, including Alexander Alberro, Iain Baxter&& (N.E. Thing Co.), AA Bronson, Garry Neill Kennedy, Suzy Lake, Ian Murray, Lisa Steele, and Ian Wallace, among others. The project will be followed by the publication of a German/English journal.

CONTINENTAL DRIFT is conceived as a major step within the scope of international efforts to attend to research on conceptual art, a vital pursuit that is still ongoing today. The exhibition sets out to accentuate the discursive potential that evolves from a local vantage point and that prompts fundamental questions associated with a topographical situation.

Funded by the German Federal Cultural Foundation.
Kindly supported by the Ministry of Science, Research and the Arts of Baden-Württemberg, the Canada Council for the Arts, the Ontario Arts Council, the Museum Assistance Program of the Department of Canadian Heritage, and the Embassy of Canada, Berlin.