A body of artworks, documents and films addressing the relationship between the visual arts and psychotropics. Since the dawn of time, or rather of humanity, our fellow men have crossed the path of psychoactive substances, plants, mushrooms and various concoctions. These encounters have led to stupefaction, intoxication, dependence, mystical insights, relief, death, even epiphany. In the patio Vincent Mauger's sculptures do not just stand on a site, they bring pressure into it. 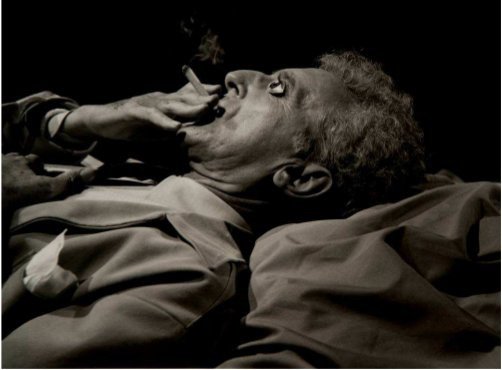 Under influences
visual arts and psychotropics

La maison rouge presents, from February 15th to May 19th 2013, Under Influences, a major exhibition which addresses the relationship between artists and psychotropics.

Since the dawn of time, or rather of humanity, our fellow men have crossed the path of psychoactive substances, plants, mushrooms and various concoctions. These encounters have led to stupefaction, intoxication, dependence, mystical insights, relief, death, even epiphany.

Artists, who are constantly in search of doors to creation, passageways, catalysts, transgressions, stimuli and ways to penetrate figments of the mind, were all but compelled to try out their effects.

Leaving moral judgement, socio-judicial standpoints, psychological interpretations and preconceived aesthetic choices aside, the exhibition proposes (necessarily non-exhaustive) examples of the interrelations between creative processes and the use of psychodynamic substances.

The most readily accessible illustration is the visual representation of substances or their use. Such images are heavily dependent on prevailing morals, and the balance of power between transgressive experiences and legislation. Consequently, the works can be viewed on a range of levels, from historic document to art. Included are psychedelic posters for American concerts, advertisements, and a selection of books and other publications on the theme.

A second aspect will include works which, intentionally or unintentionally, have a near-psychotropic effect on the viewer (installations, environments, psycho-sensorial devices).

The third corpus, and the core of the subject, comprises works produced deliberately under or concomitant to the use of psychoactive substances: drug-users producing visual art or artists experimenting with thought modifiers for creative purposes.

Films and videos are an important part of the exhibition as, by accounting for time in plastic expression, they make possible original attempts to transcribe and document altered thoughts and perceptions.

Certain artists have used psychotropic substances old and new to tripwire creativity and chart journeys into "madness" which in certain cases have proved uncontrollable or a source of suffering. Translating these experiences into the aesthetic realm, as presented here, will enable each individual to realise the constant complexity of their effects.
Antoine Perpère

Vincent Mauger’s sculptures do not just stand on a site, they bring pressure into it. The relationship to the site is an intrinsic part of the artist’s work, he questions the space in order to reveal its breaking and equilibrium points. From the adequacy between the occupied space and the shown volume, resonances rise towards the spectators’ sensitivity. The spectator is caught by the play of the surfaces, the hollow and the solid, he experiences a stimulated landscape which scale oscillates between the infinitesimal and the colossal.

Using 3D modeling, Vincent Mauger creates a world that is firmly grounded in the tangible matter. Wood, concrete blocks, bricks, metal or polystyrene, these materials are worked beyond what we could assume from their materiality. With rigorous production and little process, the perception of mass and solidity is often changed and always questioned.

In a world where distance is abolished by the speed of travel (real or virtual), Vincent Mauger offers a space with an extraordinary topography, where it feels good to get lost.