Latifa Echakhch creates an itinerary made up of a succession of 'personal landscapes' just as image stills. Huang Yong Ping in 'Amoy/Xiamen' combines the old and current name for this port city. 'Supportive' is the most monumental auto-creative oeuvre ever made by Gustav Metzger. 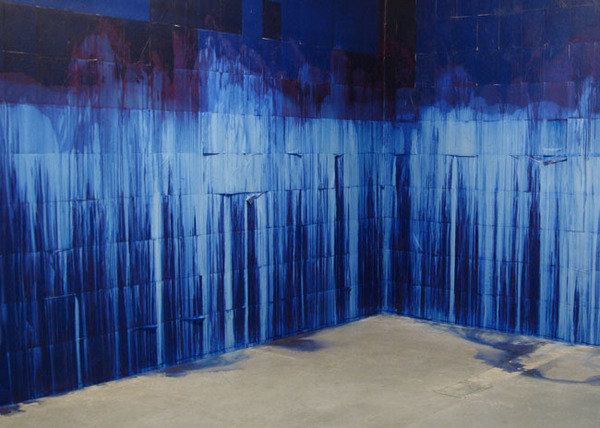 Latifa Echakhch was born in 1974 in El Khnansa (Morocco) and currently lives and works in Martigny (Switzerland).
Born in Morocco, Latifa Echakhch came to France at the age of 3 but has lived for most of her life in Switzerland. Hers is a multi-referential and multidirectional work, just like her personal background, her travels and her eclectic centres of interest.

Latifa Echakhch tends to produce installation pieces that are in direct connection with the space in which they are presented, thereby blending personal, multicultural, historical and sociological references.

For Lyon, the artist will take over an entire floor of the museum, some 1000 m2 and create an itinerary made up of a succession of “personal landscapes” just as image stills.

This exhibition is organized with the support of the Galerie kamel mennour, Paris.

Born in 1954 in Xiamen in the Fujian Province of China, Huang Yong Ping participated in the 1989 exhibition Les Magiciens de la Terre allowing him to become known in France. He moved to Paris, where he currently lives and works. He represented France at the 1999 Venice Biennial.

Inspired by a unique collection of statues from the Chinese province of Fujian (representing a pantheon of gods popular in China, discovered in the late nineteenth century by Johannes Jacobus Maria de Groot), preserved at the musée des Confluences, Huang Yong Ping has designed a new exhibition, that is both autobiographical and self-fictional.

Autobiographical because the artist comes from the Fujian Province and has always seen these statues in "situation" before discovering "ethnographical" and coloured replicas; self-fictional, because for the artist, this is the illustration of the permissiveness of cultural fields and their floating meanings (History? Ethnography? Art? Heritage? Replica? Exoticism? etc.). This piece demonstrates the mechanism of the construction and homogenization of cultural fields.

Amoy/Xiamen combines the old and current name for this port city, connected together and distinguished by a simple slash mark. Xiamen was formerly known as Amoy and witnessed some of the city's first European travellers. Amoy/Xiamen is therefore the association of yesterday and today, of the past and the present.

Gustav Metzger was born in 1926 in Nuremburg, Germany.
He currently lives and works in London.

Born into a Jewish family of Polish origin and exiled to England in 1939, Gustav Metzger was miraculously spared the death camps, unlike his family. The artist would therefore go on to place the “borderline experience” implemented and experienced by Europe during WWII at the heart of his oeuvre, as a symbol of man’s ability to self-destruct.

With Supportive by Gustav Metzger, the macLYON renews its acquisitions policy defined since its opening in 1984. Designed for and produced by the museum, these monographic exhibitions are both a problematic and a unique moment in the artist’s oeuvre, as well as being generic works*. Designed in London for the third floor of the museum, finalized and acquired in 2011, this exhibition will be installed in 2013. Supportive is the most monumental auto-creative oeuvre ever made by Gustav Metzger.