Imagining the Political Subject. The exhibition is dedicated to these forms and formats. For this group show, all Secession rooms and adjacent exhibition areas at both the Academy of Fine Arts and the MuseumsQuartier will be transformed into a parcours - a walking tour that exploores the agora of the future at the interface between visual and performing arts. 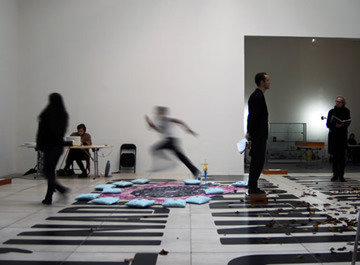 Unrest of Form. Imagining the Political Subject
Since new protest movements have been arising worldwide, often unforeseen and with sheer inexhaustible energy, many people in the artistic-cultural field who solidarise with these movements are asking a number of questions: can contemporary art advance the resistance against disastrous economic structures if it has itself a definite and profitable share in them? Or have the true potentials of art—i.e. the difficult, the nonconformist—already been liquidated behind the façades of its spaces still conceived as free? Mustn't the project of a political aesthetics transcending all types of activism suitable for media exploitation be considered aborted and suppressed, tortured and tortuous, hard to reinstall? Isn't Adorno's dictum again apt today, namely that art can no longer intervene, precisely because it is received and responded to; and because even its boldest expressions are no longer safe from the integral economy of culture?

Yet, for us, this situation of aporia, of historicity, of apparent entrapment seems to harbour a moment of utopia that can be triggered today: artistic imaginations of a political subject that refer to forms and formats that go beyond the genre of short-lived artistic agitation and their parading in the space of art.

Wiener Festwochen 2013 will dedicate the exhibition Unrest of Form. Imagining the Political Subject to these forms and formats. For this project, the Vienna Secession, the Academy of Fine Arts and adjacent public areas at the MuseumsQuartier will serve as a stage at the interface between visual and performing arts. The project will examine and negotiate perceptions and blueprints for an idea of a "politics of form." For the duration of the exhibition, artistic interventions, lectures, seminars, films and performances will enliven the ensemble; these events are conceived as integral components of the exhibition concept. The group show will feature works by artists with backgrounds in the visual arts, theatre, dance, music, performance art and literature; the wide variety of their approaches will lend.

Press conference: Friday, May 10, 10am, starting at Secession