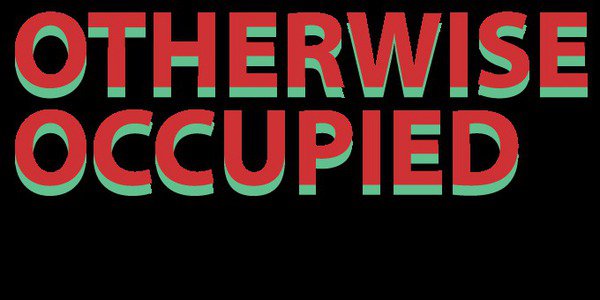 Otherwise Occupiedis an exhibition of Palestinian artists organized by al Hoash as part of the 55th International Art Exhibition at Venice Biennale 2013. Curated by Bruce Ferguson and Rawan Sharaf, the exhibition features two internationally renowned Palestinian artists; Bashir Makhoul and Aissa Deebi. Both artists were born inside the 1948 borders, in the margins of another state in their homeland and outside the occupied West Bank and the centres of contemporary Palestinian culture and have emigrated to become citizens of other states operating in a globalised art world. They still think of themselves as Palestinians and are in continuous search of new ways to imagine the nation from a distance.

Palestine, long under occupation, has been constructed by the imaginary of widely fragmented communities across the world; a far-flung diaspora, a huge population of refugees, as well as members of an indeterminate territorial authority under occupation and even a large number of Israeli citizens. There exist simultaneously no Palestinian state and many Palestinian states. It is the quintessence of Benedict Anderson’s classic formulation of nationhood as ‘imagined communities.’

Art is capable of occupying cultural spaces that are otherwise inaccessible or invisible. Otherwise Occupied describes other ways of imagining the nation outside and beyond the conflict; it is therefore a means of artistic and critical thinking through the de-territorialization of Palestine.

To be otherwise occupied is to be busy elsewhere, to be engaged in activities outside the programme. For these artists this means making work that does not necessarily comply with the agendas determined by the occupation. The ‘otherwise’ for them is an imaginary, parallel space beyond the claims of nationalism that is opened up by global cultural events such as the Venice Biennale. They are extending this idea in thinking of the exhibition as an ‘otherwise occupied’ space within the city and the Biennale which at the same time engages with the concept of the imaginary museum and the perpetually deferred utopian optimism of the ‘Palazzo Enciclopedico’.

Bashir Makhoul will be occupying the garden of the Liceo Artistico Statale di Venezia with thousands of cardboard box houses. The occupation will be partly made by members of the public during the exhibition, who can view the growing cardboard shanty-town but will also be able to construct their own house from a stack of flat boxes.

This piece is a further exploration of Makhoul's large-scale installation Enter Ghost Exit Ghost, which consists of a full-sized, interior maze and a large cardboard model of an Arab town or refugee camp and raises questions about the kinds of spaces that have emerged in sites of conflict and in the urban margins of globalization. This piece will be emphasizing the performative aspects of occupation – the act of getting there and of filling the space.

Bashir Makhoul is a Palestinian artist based in the UK. Over 20 years of work he has developed a body of work in a range of media which explored aesthetics of modernism and post-modernism as well as offering nuanced political critiques on topics of economics, nationalism, identity, war and torture. His work is widely exhibited in Britain and internationally. Makhoul is currently the Head of the Winchester School of Arts – Southampton University.

This two-channel installation consists of a re-enactment in English of a speech by Daoud Turki at the Haifa court house in 1973, when he was a defendant during a military trial. Turki, a Palestinian-Arab citizen of Israel, had been arrested by the Israeli military with four other members of the “Red Front” and charged with espionage and collaboration with the enemy. In this speech, Turki tried to advance an idea against the paranoid Zionist fantasy of conflict toward the larger idea of a socialist class struggle, proclaiming solidarity with “…all workers, peasants and those persecuted in Israel society.” The brilliance of his rhetoric and the fullness of his reasoned argument, in which he criticizes Zionism for pitting Jews against Arabs, is caught as an address almost from Franz Kafka’s “The Trial” which echoes throughout as the tone of an idealist caught in the jaws of the heinous militaristic state.

Aissa Deebi is a Palestinian artist and scholar based in Cairo and New York. His works investigates a range of notions around immigration and alienation, Diaspora as a creative space and cultural-migration. Deebi held several positions teaching art and design in international institutions, and has been involved in the establishment and running of art organizations. He is the Director of the Visual Cultures Program at the American Universtity in Cairo.

Al Hoash is a Jerusalem based, non-profit Palestinian organization that seeks the development and elevation of the status of visual arts as a substantial and critical tool for communication, innovation, pleasure, free expression and national pride. Al Hoash seeks to produce and disseminate knowledge through programs that are research based, community linked and provide platforms for education, discourse and critical analysis.