My Red Homeland. The current comprehensive exhibition, which includes new works conceived especially for the Kunsthaus Bregenz and which primarily features his most recent works, is the first major exhibition of Anish Kapoor's art in Austria. 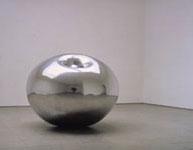 Born in 1954 in Bombay, Anish Kapoor is among the most prominent figures in British Sculpture. His award-winning work has been exhibited around the world since the early seventies. In 1990 Anish Kapoor represented Great Britain at the Venice Biennial and was awarded the coveted Premio 2000" by the international jury. In 1991 he won the renowned Turner Prize. A highlight of the documenta IX was Kapoor's building "Descent into Limbo" (1992).

Anish Kapoor has lived and worked in London for over thirty years. His work combines the spiritual traditions of his native country and the notion of the sublime from the Western art tradition. Since his first sculptures - simple forms covered with coloured pigments and arranged on the floor - Kapoor has developed a multi-faceted body of works using such diverse materials as stone, steel or glass. In his objects and forms the border between painting and sculpture becomes blurred. In the creation of three-dimensional bodies his way of working is typical of the sculptor, but his themes - emptiness, absence, transformation and immateriality - derive from painting. Kapoor's intention is to create sculptures that don't just deal with questions of form but also address the themes of belief, passion or experiences beyond material concerns.

The current comprehensive exhibition, which includes new works conceived especially for the Kunsthaus Bregenz and which primarily features his most recent works, is the first major exhibition of Anish Kapoor's art in Austria. On the ground floor Kapoor has conceived a work for the KUBArena using coloured light. Running diagonally through the space is a floor-to-ceiling illuminated wall. In the middle of the bright, coloured panel is a black field. The juxtaposition of light and darkness reveal a relationship between colour and space which gives the viewer a sense of disorientation.

On the first floor Kapoor shows new objects made mainly of stainless steel and lacquer. Large-format concave circular paintings in vibrant colours radiate throughout the space. imultaneously they seem to absorb and mirror light, creating subtle transitions from the material to the immaterial.

On the second floor white is the dominant colour in these wood and fiberglass sculptures with their holes and hollow spaces. The common theme is the void and immateriality. The meager reflection of light and occurrence of shadows renounces the mass and weight of the sculptures. What arises is a fascinating interplay between inside and outside, volume and void.

The climax of the exhibition comes on the third floor in the form of a monumental work in aseline (My Red Homeland), which Kapoor has created especially for the Kunsthaus. Out of more than 20 tons of dark-red coloured Vaseline Anish Kapoor forms a cylindrical sculpture with a diameter of 12 meters. Rotating around a central axis a large metal arm moves slowly along an orbit at the perimeter of the work, churning up the fatty material and transforming it into a smooth wall. Chaos and order, motionlessness and movement, colour and materiality, converge in this work to give the observer a truly impressive experience.

Project in the Johanniterkirche Feldkirch
A further highlight is a site-specific work for the Johanniterkirche Feldkirch, realised in a first-time collaboration between the Kunsthaus Bregenz and the Johanniterkirche. One striking aspect of this ecclesiastical space are the exposed capstones of the original hospice,which date from the 13th century. Because of this special atmosphere Kapoor has chosen to do a spatial installation. Under the ambitious curatorial direction of Eva Jakob this church space has been an open forum for the past seven years, dedicating itself to showing the work of national and international artists.

Besides projects which have been realized around the world, the publication accompanying the exhibition presents for the first time concepts and works by Anish Kapoor which have not been realized. The bilingual publication presents around forty selected works out of the artist's entire oeuvre. These projects, presented in detail, reflect Kapoor's examination of the relationship between spacearchitecture-landscape. In addition to the Bregenz works, the impressively designed book also contains photos, designs, and sketches documenting the works exhibited in the Johanniterkirche. Contributions by Yehuda Safran, Thomas Zaunschirm and Eckhard Schneider. German/English. Circa 200 pages with about 150 illustrations, hardcover with jacket, 30 x 25 cm. Price: circa 54. Euro The catalog will be published in October, 2003.