The jury selected the 66 most promising galleries from over 300 applicants: 10 after an appearance at Statements or Feature at Art Basel last year and 8 new galleries. The Performance Project features a number of artists who have a particular interest in sound and its relationship to visual representation. The Art Prize is this year awarded to the artist team Michael Meier and Christoph Franz, Zurich. 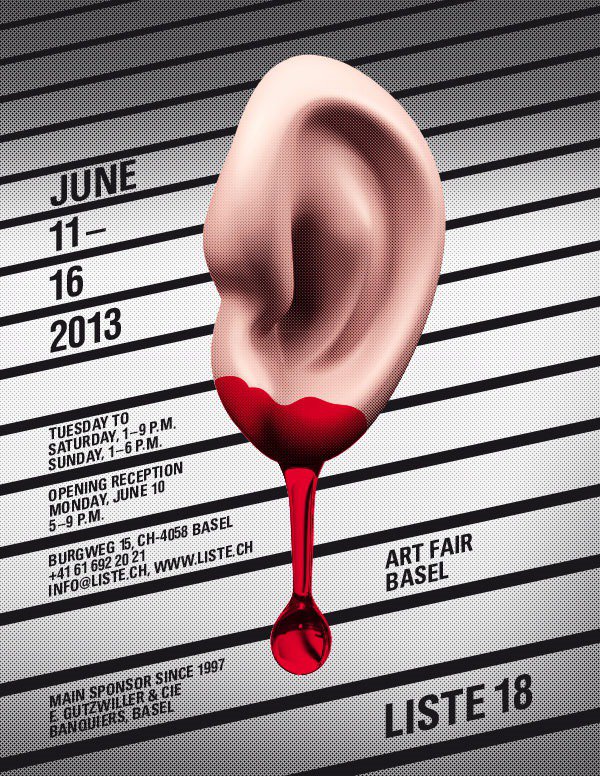 LISTE 18 - Art Fair Basel. The art fair for the most current young art and important galleries of a new and middle generation

From June 11 to 16, LISTE – Art Fair Basel, will open its doors for the 18th time. Once again, the fair will be a meeting place for the international art world.

The jury – composed of curators – selected the 66 most promising galleries from over 300 applicants. 48 galleries participated in 2012, 10 are returning after successful appearances at Statements or Feature at Art Basel, and 8 were selected from the remaining 250 applicants and will make their LISTE debut. The most interesting galleries of the youngest and middle generation will be represented at LISTE and bring to Basel a truly inspiring high-class selection of contemporary art.

Our institutional special guests are Kunsthaus CentrePasquArt, Biel, the House of Electronic Arts, Basel, Kaskadenkondensator, Basel and de Appel Arts Centre with its Gallerist Programme, Amsterdam. The Nationale Suisse Art Prize is celebrating its 10-year anniversary at LISTE and, for the 9th time, the Performance Project will be presenting a daily-changing program of important international performers.

What began as an initiative by young gallerists in 1996, developed into one of the most important fairs for contemporary young art in the world. For 18 years, the fair has been making relevant contributions to the promotion of young artists and galleries. The intentionally low number of 66 galleries and the high level of sophistication of those galleries are reasons for LISTE’s extraordinary success, international reputation and drawing power.

LISTE operates on the “cutting edge” and responds to developments in the world of galleries. Over the last several years, new galleries have increasingly begun representing older artists who are often “re-discoveries”. Thus, galleries are now free to apply with artists over 40. However, the fair’s focus remains on young artists and the vast majority of the artists being presented are under 40.

LISTE has also shortened its name - from its original form: LISTE – The Young Art Fair in Basel to: LISTE – Art Fair Basel. Accompanying this name change is a new image.

New Galleries
LISTE’s looking forward to the 8 galleries selected from 250 applicants, who will be making their debut: Aoyama/Meguro, Tokyo, who will present a solo show by Koki Tanaka (*1975). He is also presenting in the pavilion at the Biennale in Venice. Carlos/Ishikawa, London, will present a solo show by the “shooting star" Oscar Murillo (*1986) from Columbia. Kraupa-Tuskany Zeidler, Berlin, will show an installation solo presentation by the German Florian Auer (*1984). Mor Charpentier, Paris, will present video works by Julieta Aranda (*1975) from Mexico, as well as works by Cevdet Erek from Turkey (*1974). Both participated in Documenta 13. Non, Istanbul, will present the Turkish artist Meriç Algün Ringborg (*1983). Silberkuppe, Berlin, will be showing painting and video works by Leidy Churchman from the US (*1979). VI, VII, Oslo, will present the multi-media artist Eloise Hawser (*1985) from England. VidalCuglietta, Brussels, will present Nel Aerts (*1987) from Belgium, with installation, video and painting.

Artists over 40
Since LISTE’s inception in 1996, only artists under 40 have been allowed to present at the fair. Over the last several years, however, an increasing number of new galleries have accepted older artists who are often “re-discoveries”. While LISTE has adapted to this changing reality by allowing galleries representing artists over 40 to apply, the fair’s focus remains on young artists and the vast majority of artists presented are still under 40.
Among the artists over 40 who will be appearing at LISTE are Lisa Holzer (*1971), AT, text and photographic works with Layr, Vienna; Michaela Eichwald (*1967), DE, painting and installation with dépendance, Brussels; Keiichi Tanaami (*1936), JP, drawings with Karma International, Zurich; Stefan Hablützel (*1964), CH, sculpture and collage with Lüttgenmeijer, Berlin; Christina Mackie, (*1956), GB, installation with Supportico Lopez, Berlin; Markus Karstieß (*1971), DE, sculpture and wall relief with Ancient & Modern, London; Claudio Verna, (*1937), IT, painting with Monitor, Rome; Yael David (*1968), IL/NL, mixed media with Stigter, Amsterdam; Eftihis Patsourakis (*1967), GR, painting and installation with Rodeo, Istanbul; Keith Farquhar (*1969), GB, painting and objects with Fritz, New York.

Performance Project
For the past 9 years, the Performance Project has been an integral part of the fair. It is important to LISTE to provide a platform for performance, a contemporary art genre that often struggles in the art market. The Performance Project’s new curator is Fabian Schöneich, Basel. This year, the Project will present a number of artists who have a particular interest in sound and its relationship to visual representation. Resulting from a collaboration with Audio Visual Arts of New York, this year’s program will focus on artists who, in a highly distinct manner, examine the production, composition, distribution and technique of sound and who are highly cognizant of the meaning of listening, the formation of sound and linguistic expression.
The performers are: Saâdane Afif, FR; Zin Taylor, CA; Adam Linder, AU; Akio Suzuki and Aki Onda, JP; Lubomyr Melnyk, CA; Juliette Blightman, GB; Hannah Weinberger, CH. For places and times, please see: www.liste.ch/programme/performance-project

Performances by Special Guests and Galleries
On Monday and Tuesday, the gallery Jeanine Hofland will be showing performances by Feiko Beckers, NL, at its stand. An action by Martin Kohout, DE, will take place on Thursday, June 13. He will walk unaccompanied through the Gotthard street tunnel. In collaboration with deuxpiece, Kaskadenkondensator will showcase different performances throughout the week, including: Elia Rediger, Monday, June 10; Theatergruppe Glück, Wednesday, June 12; Sarina Scheidegger, Friday, June 14 and Luc Gut, Saturday, June 15. For further details, please check: http://www.liste.ch/programme/additional-performances

Special Guests
This year’s LISTE is host to our special guest, Kunsthaus CentrePasquArt, Bienne, a Swiss institution deeply involved with young art. The House of Electronic Arts, Basel, one of our annual special guests, will present current artists in the area of new media. Kaskadenkondensator, Basel, will present sound experiments in collaboration with deuxpiece and the Academy of Art and Design, Basel. For details, please see: www.liste.ch/exhibitors/special-guests

The Gallerist Programme
In collaboration with the de Appel Arts Centre Amsterdam/The Fair Gallery, LISTE is providing students in this new program of study with their own gallery stand at LISTE. This is theory being put into practice at LISTE.

Art Prize
For the 10th time, Nationale Suisse will present its much coveted art prize. This award is intended for a graduate of a Swiss art college majoring in “visual art and media art”. The prize, which includes a monetary award of CHF 15’000 and a solo appearance at LISTE, is this year awarded to the artist team Michael Meier and Christoph Franz, Zurich.

Main Sponsor
Since 1997, E. Gutzwiller & Cie, Banquiers, Basel has been the art fair’s main sponsor. With their long-standing generosity in sponsorship, they have helped and continue to help our young galleries to participate in Basel’s art fair week at very reasonable terms and conditions. LISTE considers itself extremely fortunate to have such a capable and committed partner.

Brief History of LISTE
At the end of the 1980s, a new, self-assured generation of gallerists and artists were coming of age. They had little chance of securing a space at Art Basel, the world’s most important art fair, though. In 1996, the first LISTE, a fair dedicated exclusively to that new generation, showed 36 galleries from 12 countries and was a resounding success!
Looking back over the past 18 years, we note that many, then unknown artists were making their international debut at LISTE. For example, the painter Wilhelm Sasnal, who was presented by Foksal Gallery of Warsaw, or Jim Lambie, with The Modern Institute, who presented a floor installation that was exhibited 10 years later at the Museum of Modern Art in New York.
Shown by neugerriemschneider, a then unknown artist named Elizabeth Peyton presented her small-format oil and water color pictures. Francesco Vezzoli’s video works were presented by Franco Noero. Steven Parrino, Carol Bove and Banks Violette were presented by Team of New York. The list of artists who got their start at LISTE is long.
This success story also played itself out with the galleries – among those that were at the time unknown but today belong to the most established, are: neugerriemschneider, Berlin; Eigen + Art, Berlin/Leipzig; Foksal Gallery Foundation, Warsaw; Kurimanzutto, Mexico City; Modern Art, London; The Modern Institute, Glasgow; Air de Paris and Emmanuel Perrotin, Paris; Massimo de Carlo, Milan; David Zwirner, Casey Kaplan and Team, New York.

Press Material und Press Registration
Further press information and graphic material can be found at:
http://www.liste.ch/press or with the press responsible, Fabienne Blanc, +41 61 692 20 21

You will receive your press pass at the fair office, which is open daily 30 minutes before opening hours until closing. We kindly request that you register for LISTE 18 at: www.liste.ch/contacts/press/accreditation.