The exhibition takes a fresh look at the Museum's holdings of American art made between 1915 and 1950. The selection of over 150 works is organized thematically, depicting such subjects as urban and rural landscapes, scenes of industry, still-life compositions, and portraiture. 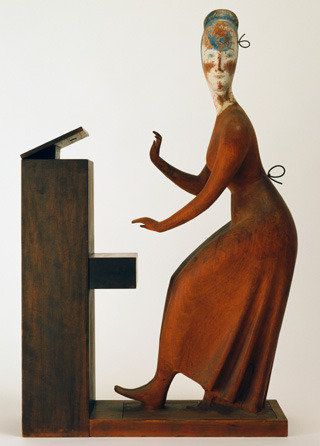 The Museum of Modern Art announces American Modern: Hopper to O’Keeffe, on display from August 17, 2013, to January 26, 2014. The exhibition takes a fresh look at the Museum’s holdings of American art made between 1915 and 1950, and considers the cultural preoccupations of a rapidly changing American society in the first half of the 20th century. American Modern includes paintings, drawings, prints, photographs, and sculptures by more than 50 artists, bringing together some of the Museum’s most celebrated masterworks, including pieces by Charles Burchfield, Stuart Davis, Edward Hopper, Georgia O’Keeffe, Charles Sheeler, Florine Stettheimer, Alfred Stieglitz, and Andrew Wyeth. Contextualizing these works across mediums and amid lesser-seen but revelatory compositions, American Modern offers these artists’ views of the United States in a period of radical transformation, expressed in a variety of visual styles, artistic movements, and personal visions. The selection of over 150 works is organized thematically, depicting such subjects as urban and rural landscapes, scenes of industry, still-life compositions, and portraiture. This focused look at American masterworks and surprises in MoMA’s collection is organized by Kathy Curry, Assistant Curator, and Esther Adler, Assistant Curator, Department of Drawings and Prints.

The clash between the urban realities of a rapidly modernizing society and a nostalgia for an idealized American countryside is a theme that runs throughout much of the exhibition. In Edward Hopper’s House by the Railroad (1925)—which, in 1930, was the first painting to enter the Museum’s collection—a Victorian manse cropped by the harsh horizontal of a railway track contrasts rapid modernization with an older way of life based in rural traditions. Charles Sheeler’s American Landscape (1930), which depicts the Ford Motor Company’s River Rouge plant near Dearborn, Michigan, seems to celebrate newfound industrial efficiency but also remains ambivalent about its effects—missing are the thousands of people who made the factory run, and any sense of noise, dirt, or actual labor or hardship.

The city is also a frequent subject of works in American Modern, as evidenced in Walker Evans’s untitled photographs of urban architecture (c. 1928–29) and George Ault’s New Moon, New York (1945). Both capture the strong lines of bridges and skyscrapers in an almost abstract language, omitting the crush of people who flocked to the cities during these decades. John Marin’s images of New York present frenetic, celebratory compositions in which buildings and bridges themselves seem to be the source of the intense activity of the city.

Scenes of the American countryside also focus primarily on the land and structures, emphasizing shape and line. Sheeler’s photograph White Barn, Bucks County, Pennsylvania (1914–17) is shot so near to the barn wall that it conveys no sense of the overall structure, while the barn in Bucks County Barn (1932) sits squarely in the center of the painting, dominating the composition. Ralph Steiner’s American Rural Baroque (1930), with its empty rocking chair on a porch, suggests a simpler life and time. Charles Burchfield’s watercolors of 1916–18 capture a wild American landscape untamed by human intervention—the looming black forms of houses and a farm silo in Rogues’ Gallery (1916) are matched by a frieze of wilting sunflowers; the flowers singled out in The First Hepaticas (1917–18) are lost among the splintering tree trunks of a threatening forest. Georgia O’Keeffe’s stunning watercolor Evening Star, No. III (1917) also evokes the wide open spaces of the American landscape, with bands of color expanding across the page.

American Modern also includes key images of the people of this time. Florine Stettheimer’s whimsical family portrait in an artist-designed frame captures a high-society elegance. Elie Nadelman’s Woman at the Piano (1920–24) suggests a soundtrack for the upbeat parties of the era, while George Bellows’s prints of boxing matches (1916 and 1923–24) suggest the noise and liveliness of these major sporting events. In contrast, a stillness pervades Ben Shahn’s image of a New York handball game (1939), as well as Alfred Stieglitz’s portraits of artists affiliated with his galleries, such as John Marin (1921–22), Charles Demuth (1923), and others. The still-life images and arrangements of objects in the exhibition include Edward Weston’s sensuous photograph of a pepper (Pepper No. 30, 1930) and Charles Demuth’s Eggplant and Tomatoes (1926). Stuart Davis’s Lucky Strike (1921) and Odol (1924), which feature abstracted images of mundane items, echo the tremendous presence of advertising imagery and commercial culture in the lives of modern Americans.

SPONSORSHIP:
The exhibition is supported by the MoMA Annual Exhibition Fund.

PUBLICATION:
The fully illustrated catalogue presents a fresh look at MoMA’s holdings of American art from the first half of the 20th century. An introduction by exhibition organizers Esther Adler and Kathy Curry, assistant curators in MoMA’s Department of Drawings and Prints, discusses the visual qualities of these works, and an essay by Adler explores the Museum’s history of exhibiting and collecting them. 9.5" x 12", 154 color and duotone images. Hardcover $45. Available from the MoMA Stores and online at MoMAstore.org. Distributed to the trade through ARTBOOK|D.A.P. in the United States and Canada, and through Thames & Hudson outside the United States and Canada.

AUDIO TOUR:
The audio tour accompanying the exhibition features commentaries by curators Esther Adler and Kathy Curry, as well as artists' quotes and archival audio of Edward Hopper and Charles Burchfield. The audio is available at the Museum on the MoMA Audio+ mobile guide, and is also available at MoMA.org/audio and MoMA.org/m, for download through MoMA.org/mobile, and as a podcast on iTunes. MoMA Audio+ is available free of charge courtesy of Bloomberg. No. 28

The Museum of Modern Art
Special Exhibitions Gallery, third floor; the Bauhaus staircase; and The Abby Aldrich Rockefeller Sculpture Garden
11 West 53 Street, New York, NY 10019
Hours: Saturday through Thursday, 10:30 a.m.–5:30 p.m. Friday, 10:30 a.m.–8:00 p.m.
Museum Admission: $25 adults; $18 seniors, 65 years and over with I.D.; $14 full-time students with current I.D. Free, members and children 16 and under. (Includes admittance to Museum galleries and film programs). Free admission during Uniqlo Free Friday Nights: Fridays, 4:00 p.m.–8:00 p.m.
MoMA.org: No service charge for tickets ordered on MoMA.org. Tickets purchased online may be printed out and presented at the Museum without waiting in line. (Includes admittance to Museum galleries and film programs).
Film and After Hours Program Admission: $12 adults; $10 seniors, 65 years and over with I.D.; $8 full- time students with current I.D. The price of an After Hours Program Admission ticket may be applied toward the price of a Museum admission ticket or MoMA Membership within 30 days. MoMA/MoMA PS1 Blog, MoMA on Facebook, MoMA on Twitter, MoMA on YouTube, MoMA on Flickr