Le Sarcophage de L. pres de M. (en D.). The exhibition invites us to find out a fictional world with an archaeologic and timeless narration. Pursuing his work about light, Perraud let us explore the atmosphere of this mysterious crypt through a collection of objects. 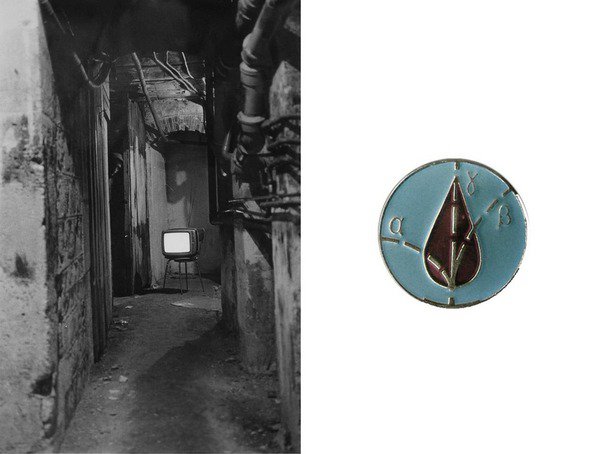 For his first solo exhibition “The Sarcophagus” at galerie de Roussan, Stefane Perraud summons viewers to follow him on an introspection of a collection of artworks that have been staged as an archaeological metaphor. Moving through the gallery, visitors encounter a mysterious space replete with sculpture that act as clues, each calling to be decoded. This fiction plays with symbols, signs and lights, at once deployed in both a contemporary and immemorial way.

A cold glimmer, soft and troubling, seems to come from a source that is hard to define. It is a conducting thread, the vector of a message arising from its own being. The dramatic power of this force is a common point for the pieces. Amid the documents and objects, photographs and drawings a partial story is constructed, one that each person has to complete.

The central piece in the basement is a video installation, a work that provides access to a space outside of the gallery via a motorised video camera. The camera’s design is based on model robots used to access sensitive sites, such as nuclear accident zones, Egyptian pyramids or for exploring the surface of Mars. Thanks to the robot, participants can control the camera’s motion and thus discover a mysterious space, a kind of cellar that places the other works in the exhibition in perspective.

Just exhumed from this unknown crypt, from which reality arises in a collision of different epochs, the various objects in this exploration seem to be frozen in the brief moment just before their revelation, yet within the same luminous enigma. Behind a rock and some metal dug up by excavations, is a lump of radioactive material, an imperishable fire, or the metaphor of an eternal memory that lives on outside of the bodies and beyond the space.

The present places remain in memory, while its imagined places then merge. Recollections subjected to degradations and transformations imposed by the fluctuations of the mind become the object of a meticulous exploration, symbolic and documented, tangible yet as vaporous as a memory of childhood.

This introspective search is a model that emanates from antiquity and the birth of the writing, extending to the excavation robotised technologies of contemporary exploration. It determines a ground in which the paradox is that one neither circumscribes it nor places it in time. Even if they come from a perfectly intimate field, the clues resound in collective space. Each one proposes that we not reconsider its history as a complete set of elements, but instead as sources through which light endures and transforms.