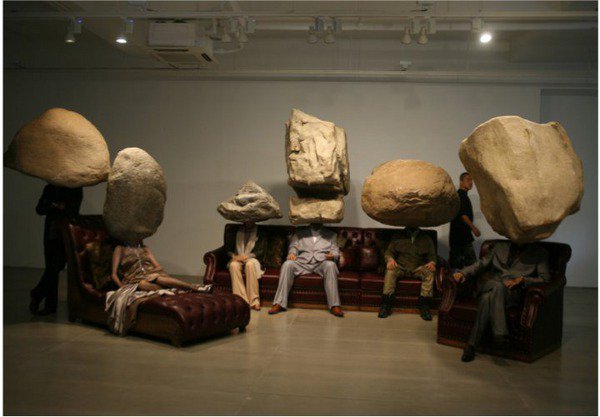 Philippe Joppin: In the past you have been doing several series of sculptures but in the last shows I have seen a lot of paintings. How did you get into this process?

Michael Sailstorfer: I started the series of “Mazes” paintings in 2009 and did show them for the first time in 2012. In 2009, after many thoughts and doubts, I decided to make this shift to painting as it was a natural process and next step in my practice...the idea came and as an artist I don’t want to be limited by a medium or material to use. First is the Idea, second the choice of material...That’s how I usually start to work and that’s why there is a big diversity in my practice and every piece or series of pieces looks different and starts with new problems, doubts and decisions to take. This process is illustrated in the “Mazes”. All the, “Yes” and “No”, “Rights” and “Lefts”, “Ups” and “Downs”, good and bad decisions are visible on the surface and make the artwork.

With this new series I also have the feeling that your references are moving from the German cultural scene to the American Pop Culture?

In the latest “Mazes” there is a direct reference to Andy Warhol’s oxidation paintings. For the canvases I use a primer with copper or other metallic pigments before the maze structure is screen printed onto them. By spraying acid on the canvas or pissing on the surface I try to find the way through the maze, what makes the primed surface oxidate...

In the “Mazes” series you are collecting images from Internet while you are usually playing with the nature and the way the artist could turn it into another reality. it is also something that interests you with these web references or it is more the gesture and the infinite possibilities of the medium that interest you?

Almost every new piece starts with an online research. When I started to do the “Mazes” I looked for templates and found thousands in the web. There are online maze-generators, web-sites for children and pastime. It was the easiest way to get the material and as an infinite resource. But I also like the idea of transforming random and infinite possibilities by right and wrong decisions into a unique piece of art.

For the show at the gallery you are also working with the iconic Statue of Liberty. Is there a relation with the fact that Bartholdi was a French Sculptor or it just come out from the idea to change this iconic image as you are doing with the Warhol piss paintings?

On my way from Berlin to the countryside in Brandenburg I stopped at a place that sells second hand construction materials. They had this 2,5m tall aluminum cast of the Sculpture of Liberty in their garden next to fragments of soviet monuments, old bathtubs and parts of the Berlin wall. I decided to buy the sculpture and had it in my studio for quite some time...
Planning my show for Galerie Perrotin in Paris I decided to show it there, as the real sculpture was a French present. I liked the idea to take it literally and use the sculpure as a big drill to perforate the gallery walls. I think the idea was not to change the iconic image but to see what this iconic image or the word ‘Freedom’ can be used for and what connections could be made.

As for older sculptures you like to associate a ready made with a electri- cal combination. I see a close relation between “If I should die in a car crash it was meant to be a sculpture”or “Zeit ist keine Autobahn” and the Statue of Liberty sculptures?

It is not primarily about the electric device. It is about playing with ready- made that carry certain references. Those references and ideas are put into new contexts through small shifts or transformations. Sometimes a motor and a plug are needed to get this working, sometimes an angle grinder is enough. For example when a police car is transformerd into a drum kit. “Drumkit” 2005.
And of course there are close relations between the new Statue of Liberty sculpture and previous pieces such as “If I should die in a car crash it was meant to be a sculpture” or “Time is not a motorway”. In “Time is not a motorway” a car tyre, powered by an electric motor, grinds against the gal- lery wall and gets used up during the exhibition period. The floor fills with rubber dust and in the whole gallery you can smell the burnt rubber. This piece is about time. Getting older and getting grey hair...
It’s hard to talk about the new Statue of Liberty sculpture as it is still in pro- duction and I haven’t seen it in real. But it is about freedom, in many ways... But I have an other idea about the electric motor in some pieces. It gives the piece a timeline...makes the piece perform, without human power,... and thus the sculpture is humanized and becomes the performer on the stage, the white cube...

“my paintings have a short life, but they have several lives” Claude Rutault

Claude Rutault’s work uses a set of rules that was established in 1973 in de- finition/method 1: ‘A canvas braced on a stretcher, painted the same colour as the wall on which it is hung. All commercially available formats can be used, whether rectangular, square, round or oval.’ The identity of the canvas colour with the wall has led to development of a corpus of approximately 580 de-finition/methods. Rutault’s texts form the instructions for an evolving work that is ‘actualized’ by its ‘charge-taker’ (the collector or museum, for example).

Since 1995, in keeping with the logic of abandoning the finished object, Claude Rutault has repainted all the paintings he did before those painted the same colour as the wall. He has added breadth to his statement by using the canvases beyond the strict relationship of wall to canvas. Canvases are stacked, placed on the floor or leant up against the walls.

The exhibition “actualités de la peinture” brings together some twenty artworks in three sets evoking the stages of a work’s life, from the workshop to the gallery. The composition of Vermeer’s “L’Atelier”, also known as “L’Art de la peinture”, is suggested through the vocabulary of ‘de-finition/methods’. The second offering hinges on Nicolas Poussin’s “Saisons”. Two series of original engravings of the four pictures are used. For the first of these the engravings are painted the same colour as the wall (as was the case at the Centre de Vassivière and then at the Musée de Nancy). For the second series, each engraving is placed on a stack of canvases with a different coloured glass placed on each pile. The last room contains a version of Watteau’s “L’Enseigne de Gersaint”, updated by surrounding a contemporary engraving with a dozen ‘de-finition/methods’. This painting is intensified by giving a contemporary feel to Watteau’s original statement.

Excerpts from the discussion between Claude Rutault and Hans Ulrich Obrist, in the catalogue published by Galerie Perrotin and Damiani. (...)

Hans Ulrich Obrist: I was wondering who your influences were at the time? When you did this experiment in 1973, did you have references? (...)

Claude Rutault: the references came later. i was a provincial guy, most of what i knew about painting came from journals. there’s no point kidding myself: i was somewhat behind in relation to my parisian colleagues... i had ellsworth kelly’s albums, several skira albums. i felt very distant from american painting, even though it had made a great impression on me. it was the hours i spent working on my painting in the garden of rue clavel that prompted me to study the work of certain artists. work like frank stella’s, the series of black stripes, the equivalents of carl andre, ad reinhardt... but it was the experiments of peo- ple such as kazimir malevich that fascinated me most, the black quadrilateral, but just as equally the texts; exander rodchenko, the three monochromes in 1921, red, yellow, blue... i was interested in people who made radical ges- tures at one point, who pushed things to the edge. rodchenko and his three monochromes; he stopped in 1921 and started again in 1927 with paintings i consider catastrophic! malevich had pretty much the same path. and pollock, with his return to figures. these paths gave me food for thought. i told myself to be careful not to fall into this renouncement, maybe. once i finished the “hopscotches”, i did nothing but roll out canvases the same color as the wall, unravel the threads of my initial choices.

It came almost immediately, by the actual definition of the process of updating each work. i think it led me quite naturally in 1995 to repainting all my paint- ings dated before 1973. A big job.

The text of the de-finition/method is a set of instructions to execute a painting. its particularity is that it’s incomplete. the person who actualizes the work has choices to make: always the color and generally the dimensions, the number of canvases, and the hanging. this is how the text exists. it is designed to keep me at a distance from the work. this is risky painting. i will have surprises, good or bad, but the work’s evolution, survival, and actuality come at this price. the way i see it, thanks to the text, the work is not subjected to time; time drives the work. the work will exist in the long term. the painting is always yet to come, the actualization is just a moment - often very brief. the painting continues from one actualization to the next, one intermission to the next. the totality of the work exists at every moment. as soon as one actualization is shown, we wait for the next. because we know that just as time condemns it, it also means it can come back. there isn’t one work left from the first ten years that is still in its original state, they have been repainted or exist in other formats. the charge-taker will have changed the format, the number of canvases, the hanging and, of course, the color. as a result, i have never seen over half of my paintings. this distance, which comes from the nature of the text and alters my relationship to my own work, appeals to me. * Excerpt of the discussion with Marie-Hélène Breuil published in “claude rutault”, pub- lished by Flammarion, Paris. 2010

Galerie Perrotin and Damiani are publishing a monograph of Claude Rutault including a discussion between Calude Rutault and Hans Ulrich Obrist.

Galerie Perrotin is delighted to present the exhibition “Dear” by Sun Yuan & Peng Yu gathering four installations, three of which are monumental. (“Teenager Teenager”, “Spilling out”, “Dear” and “Untitled”)

Their works come across as provocative takes on complex issues of our contemporary era. Although they are among the most controversial artists in China – with a style marked by a poignant and disturbing hyperrealism – their installations express a vision of the human condition set in the modern world. Using human fat, rubbish or live animals, parodying figures of power- ful leaders, their works are so many challenges to value systems, socially conditioned prejudices, and the ambiguous relations between East and West. While their “all-powerful machines”, characterised by their technical virtuosity, act as metaphors for a consumer society that has lost its way. With dark humour, they intensely probe life and death in strange, destabi- lizing situations. Generating a different disquiet so as to better overcome the existing one.