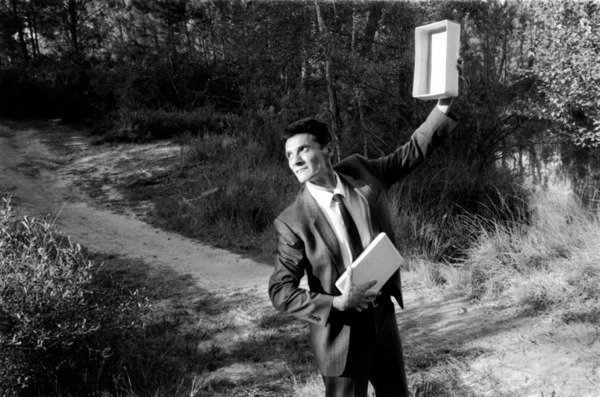 As a child, I didn't have an imaginary friend, I had an imaginary photograph. In every other way I was a normal (you could say boring) child. I didn't see the photo as anything particularly special, but I knew I should keep it to myself. Funnily enough, I thought someone might steal it if they heard about it.
I would stare at this image for countless hours and yet now, I couldn't really sketch it for you, not properly. It seemed to help me. Whenever I felt alone I would take a look and it would just pour into me. For all I knew I was holding the image upside down the whole time. It didn't matter, it was my little makeshift shelter.

I only found out what the picture was actually “of” years later at school. I was sixteen or seventeen, a typically bad, uninterested student. My big idea was to only ever read the prefaces in books so I could cover more ground. Not recommended.
Walking to school was depressing, I felt I was going deeper and deeper into a cave. There was only one teacher who I paid attention to, Mrs Padgett. The first thing she told us was Bertrand Russell's five minute hypothesis: “There is no logical impossibility in the hypothesis that the world sprang into being five minutes ago, exactly as it then was, with a population that "remembered" a wholly unreal past.” She had my attention.

One day she mentioned, “Positrons.” I thought of my imaginary photograph. I suddenly knew it was of a positron. The word just seemed right. She handed Marie a picture and asked her to pass it around.
My school chair felt like a swing.
My mind began jumping around, I listened on: “This photo of a positron was taken by Carl Anderson in 1932. One of the puzzles of physics was (I pictured the front of the school) why all electrons are identical. Feynman had (the back of the school) an idea that all electrons could in fact be the same electron, just (a face, two blinks) bouncing back and forth between (a camera flash) the beginning of time and the end. An electron travelling (a baseball) backwards in time is what we (sculptures, drawings, films) call a positron. They do exist. Mind boggling, I know... But what is (another classroom) important to remember is...” Her voice faded out. The classroom rolled over and filled with amber as the picture was handed to me.

Opening wednesday 5 june from 6 to 9 pm