a new series of drawings which are to be thought of as snapshots of what we would see through a periscope scrutinising the unconscious of the artist. 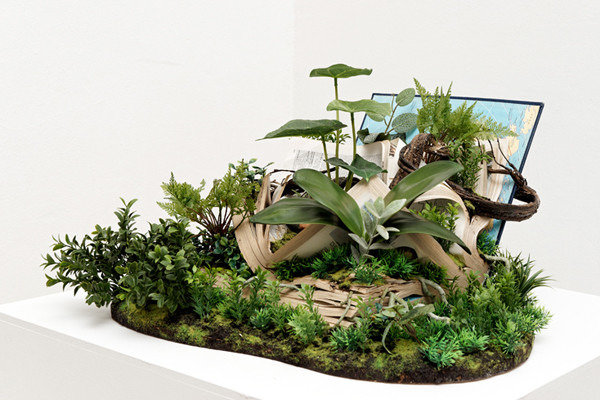 Among the main unexplored terrains, before the cosmos and the deep end of the oceans, our own depth is without a doubt the most unknown and farthest terrain there is. We are all, to some degree, geometricians, measurers, investigators of it, but only a small delegation is authorised to immerse itself in it and dig out a mysterious mud. We have entrusted the artists, these deep-sea divers of the unconscious, for over 30,000 years, the heavy burden to bring back to us, whenever they can, something from the depths of existence.
Gilles Barbier is not a beginner in the profession, he is more of a hero, one that is not afraid to tackle symbols, clichés and personal demons.

We won’t be surprised therefore to find the artist’s body moulded again, using this popular and hyperrealistic technique he so adores. But why use his own body and risking a devouring narcissism? For Barbier, the answer is first and foremost a technical one and has to do with workshop practicalities: his own body, this aging entity, is always close at hand. He knows how to pose and form the right attitude, without having to direct a potential model. The mould allows him to elude interpretation. “There is always an outsider interpreting the body: time”.

This ritual of keeping a print of his own plastic form, Gilles Barbier has been practicing it for years. It is a physical performance which is removed and requiring both immobility and concentration. It reminds us of classical sculpture. This stretched out time is literally represented in the Still People series (2013) in which the masculine body is presented sitting down, meditating, strangely invaded by moss, lichen, ivy, mycorrhizal fungi and other climbing plants. A “romantic” sculpture which we can interpret in many ways, either an autobiographical homage to the practice itself, a metaphor of a man removed from his own time, or symbolic of a reconciled being allowing the anarchy he has domesticated and enslaved for centuries grow from his pores. Accompanied by his feminine and “Ophelian” counterpart, one cannot help but to draw parallels with stories, classics or mundane, which immediately come to mind: Adam and Eve naturally, Sleeping Beauty, and even Tristan and Iseult. These characters are directly confronted and in tension with a huge table covered with food, a “Gargantuan hyperrealistic feast” lying imposingly at the centre of the gallery. Here, on this banquet “where the eye never rests”, small white architectures with uncluttered forms have grown. As in the Still people, different temporalities are fighting each other, overlapping and intertwined. The temporality of the flesh, of the imminent putrefaction, acts as a foundation for the slow temporality of the architecture. This exhibition could in fact constitute a long meditation on the different perceptions of time, their dovetailing, their dynamics, their confrontations. The new works presented here are inscribed in a series (1) which, in Gilles Barbier’s oeuvre, tackles this idea of “living, constructing, growing on an ephemeral, moving and living base.”

The exhibition also presents a new series of drawings which are to be thought of as snapshots of what we would see through a periscope scrutinising the unconscious of the artist. A kind of journal, a magma where pieces of him are boiling, elements which we can find more or less developed in the sculptures and installations. Most of the time, they are accompanied by speech bubbles, phylacteries or maxims which influence the reading of the work without ever acting as explanations. They are perhaps a kind of monitoring of the artist’s activity, a monochrome and figurative fixation of the black matter forming the unconscious, images acting as the Freudian “Id”, structured like a language. Gilles Barbier does consider them as a grammar, the rules of which vary according to the space that hosts them.
This series, started in 2003, is part of the “compost on which the work grows” : a kind of mould without limit.