Not All Heroes Are Registered. The artist features a new installation from the series Multi Bodies (2012-2013). 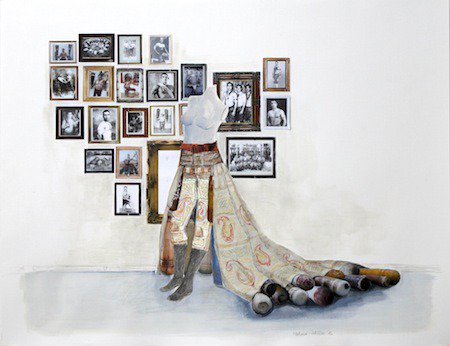 In her solo exhibition at uqbar the artist Mona Hakimi-Schüler (born 1977 in Tehran, lives in Berlin) shows a new installation from the series Multi Bodies (2012 – 2013). With this series, the artist questions the role of women in society in general and also tries to counter stereotypical representation of women from Islamic cultures.

The new installation, Not All Heroes Are Registered is the third in the series. Here the artist placed a life-size, faceless, female mannequin with flashy-colorful-ornamented trousers in front of a wall full of framed pictures and a mirror. All pictures show photographs of athletes, called Pahlevani (Heroes), pursuing an ancient Iranian martial art whose roots can be traced back to the pre-Islamic period of Iran. The rituals of Varzesh-e bastani meet with Sufi traditions. This sport is intended for physical and mental exercise and practised exclusively by men. It is comparable to a highly ritualized form between wrestling and body building. The athletes originally only wore a pair of trousers as a symbol for equality. The heroes in the exhibition pictures all wear this traditional clothing, as well as the artist's heroine. Hakimi, however, has given her heroine no ordinary leg clothes, but designed a special creation between trouses and skirt with a train consisting of colorfully ornamented fabrics covering a collection of wooden dumbbells which are used for the exercise of Varzesh-e bastani.

As in many of her previous works, with this installation the artist bridges current issues and traditional Iranian symbolism and imagery. The result is a disturbing, colorful-kitschy image between yesterday and today.