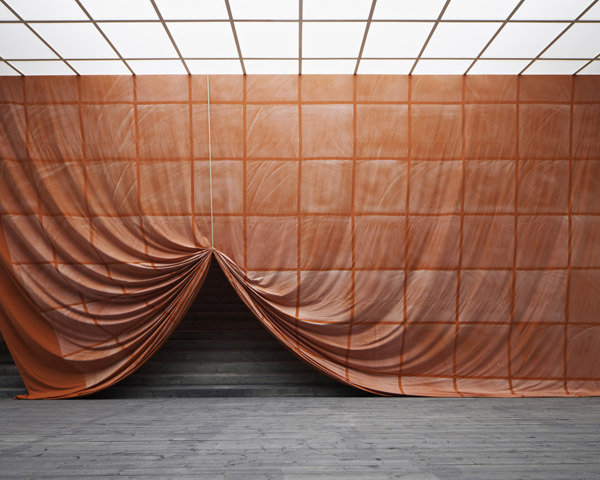 Ulla von Brandenburg
Innen ist nicht Außen
In her films, installations, performances, and drawings, German artist Ulla von Brandenburg explores how things are staged and made theatrical. The relationship between audience and actors, the rules of performance, and the overlap between reality and illusion are themes addressed in her work.

Ulla von Brandenburg's first solo exhibition in Austria will show her new film, Die Strasse, within the context of an installation the artist created specially for Secession's main gallery. There are no cuts in this black-and-white film; the camera tracks the actors' performance in one single shot. The set is an ephemeral Potemkin village which Ulla von Brandenburg constructed in the open air, mainly using white canvas. The stylized film set, the mysterious and enigmatic rituals that seem to govern the performers' interactions, and their intermittent bursts of singing render the film unexpectedly poetic.

Reflecting the film's thematic thrust, the installation that surrounds it explores different planes of reality and the blurred boundaries between what is and what merely seems to be. The projection room is preceded by a walk-in theater complete with curtains in different colors, steps, platforms, and various audience spaces. This scenario, which plays with notions of onstage and offstage, outside and inside, confronts viewers with themselves and their own role. As is often the case in Ulla von Brandenburg's work, curtains are a means of marking the boundary between the real world and the world of the theater—an ideal space in which imagination, dreams, and the unconscious rule, where time and space are insignificant.

Ulla von Brandenburg, born in Karlsruhe in 1974, lives and works in Hamburg and Paris.

Susi Jirkuff
Wild Wood
Susi Jirkuff studied sculpture in Linz and London, but her preferred artistic media are drawing, video animation, and spatial installation. Many of her works have been shown at international exhibitions and film festivals; her themes include the construction of reality through media, social isolation, and the identity-forming power of pop culture. Very often her films depict (sub)urban life and anonymized spaces. Images from newspapers, television, and the internet supply much of the material for her drawings and animations, but she also uses her own photographs. The artist's approach is playful, her formal idiom spare and stylized as she exploits different methods of creating cinematic illusion to produce a media-based plane of reality that once again reveals drawing as a medium particularly her own.

The exhibition Wild Wood in Secession's basement gallery was conceived as a spatial installation. Wall drawings and wallpaper, animations projected onto geometric forms, abstract sculptural elements, and soundscapes form a life-size, walk-in film set encompassing three rooms. The installation also provides the context for the première of the artist's new video animation, Boyz in the Wood (2013)—the title references the 1991 movie Boyz n the Hood by John Singleton, an authentic portrayal of life in the ghetto in South Central L.A.

Wild Wood takes a—somewhat ironic—look at the discrepancy between the paradigm of unlimited freedom propagated by the media on the one hand and, on the other, the (real) constraints experienced at personal level and in society.

Susi Jirkuff, born in Linz in 1966, lives and works in Vienna.

In his pared-down 16-mm films and photo series, Viennese artist Hannes Böck engages with ongoing debates about film aesthetics, art, and cultural history. Extensive research and travel—destinations include China, Mexico, Peru, and the Galápagos Islands—provided the basis for such works as Las Encantadas (2012), Niches Cut into Bedrock at Sacsayhuamán, Cusco and Inca Stone Quarry at Cachicata, Ollantaytambo (2011), or New Hefei (2007/8). The choice of destinations reveals a keen interest in postcolonial situations.

In his most recent film installation, Fünf Skulpturen aus den ägyptischen Heiligtümern im Museo del Sannio, Benevento: n. 252 Hockender Pavian, Diorit; n. 253 Falke, Amphibolit; n. 255 Falke, Gabbro; n. 256 Hockender Pavian, Diorit; n. 280 Apis-Stier, Diorit, Hannes Böck examines the complex relationship between archaeology, art history, photography, and the images and metaphors these disciplines use. Created specially for Secession's Grafisches Kabinett, the film installation examines the impact of Egyptian culture on Ancient Greece and the Roman Empire by bringing the personalities of its stone protagonists to life. The artist addresses the mechanisms of inclusion and exclusion used in absolute history, which are discussed in the postcolonial debate, and critically reflects the history of image-creating media.

Hannes Böck, born in Vienna in 1974, lives and works in Vienna.