Gunter Brus and Franz Graf. With its exhibition dialogue continues its series of artistic juxtapositions which began in 2009 under the motto Confluences - Differences. In installation stagings, various works are placed beside each other in a related manner, connected by narrative and association. 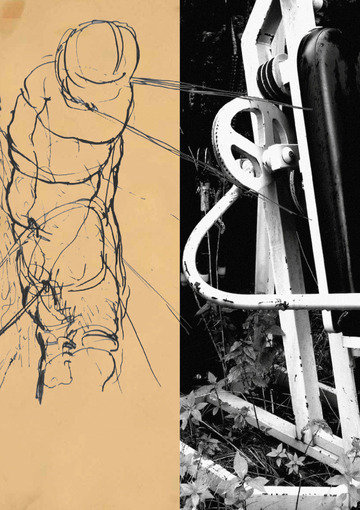 With its exhibition dialogue Günter Brus and Franz Graf the BRUSEUM continues its series of artistic juxtapositions which began in 2009 under the motto Confluences – Differences. Franz Graf is considered one of the great illustrators of contemporary Austrian art. Very often large-format portraits and human depictions dominate his work, overlaid with ornamental patterns and dark, abstract forms. These structures, which he abstracts from vegetable and technical-mathematical areas, are also employed as autonomous images and are accorded equal value in his œuvre alongside pictorial and text pictures, figurative depictions and installation objects.

Franz Graf has followed Günter Brus’ work with great interest over the years and repeatedly woven them into his own œuvre as a reference and an impulse. For the BRUSEUM exhibition, he has engaged once again with Brus’ work, producing new pieces that enter into a dialogue with unknown and barely seen works by Brus, revealing a dialogue on the darker sides of life. Franz Graf’s methods of arranging drawings and canvases into extensive stagings using found and constructed objects, photographs and sound structures is adapted here for the show in the BRUSEUM.

In installation stagings, various works are placed beside each other in a related manner, connected by narrative and association. The presentation in the BRUSEUM will take on the forms of a spatial picture without boundaries, and the many differences and confluences will enable a new perspective on the well-known work of both artists.

The BRUSEUM has been turned into the scene of a dialogue between the two artists Günter Brus and Franz Graf in the exhibition Against the Light. The dialectic structure, which avoids any strict chronological or thematic order, develops on the pattern of a discussion between the two. Different themes are alluded to and extensively discussed, only to be dropped and then taken up again and developed further in some other direction. The combination of what to all appearances is such a heterogeneous body of work brings many surprising correspondences and allows intimate spaces for thought to emerge. The BRUSEUM extends
an invitation to witness this richly facetted dialogue, which turns on such fundamental issues as coming into existence and ceasing to be, desire and rejection, humanity and violence. The unexpected juxtapositions lead to the discovery of mutual influences, they permit a new view of the work of both artists to develop and let this to appear against the light provided each to the other by the dialogue partner.