On The Origin, the collective's third solo show at the gallery, featuring a new series including two commanding sixteen-foot paintings and additional works inspired by Charles Darwin's seminal text. 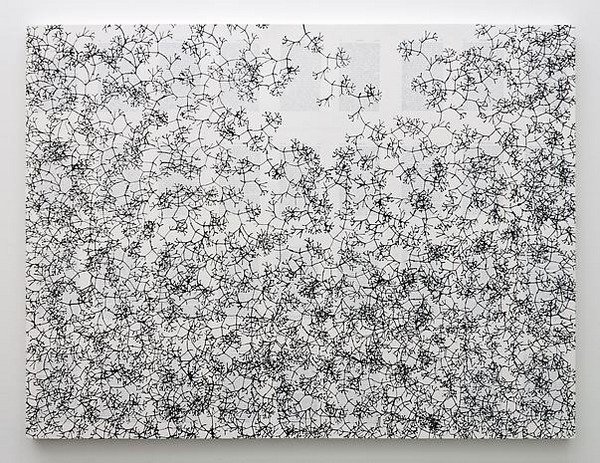 New York, 16 October 2013—Lehmann Maupin is pleased to announce an exhibition of new work by Tim Rollins and K.O.S. on view at 540 West 26th Street from 7 November – 28 December 2013. On The Origin will mark the collective’s third solo show at Lehmann Maupin and will feature a new series titled On the Origin of Species (after Darwin), including two commanding sixteen-foot paintings and additional works inspired by Charles Darwin’s seminal text which is considered to be the foundation of evolutionary biology. Rollins and members of Kids of Survival will be present for an opening reception on Friday, November 8.

To create On the Origin of Species, Rollins and K.O.S. appropriated a sketch from Darwin’s 1837 notebook that puts his theory of evolution into visual form. The abstract diagram has a tree-like structure and is commonly referred to as Darwin’s “Tree of Life.” Working intuitively, the group copies, layers, and repeats Darwin’s simple image over book pages to create a sprawling complex configuration. Through this act of repetition and duplication, Rollins and K.O.S. explore the essence of Darwin’s ideas in both form and action. The repetition of the simple form, each stemming from the one before, to create a greater construction illustrates Darwin’s theory. Rollins and K.O.S. also relate this process to a model for social action, noting the ability for one idea or person to inspire and create an outcome greater than the individual. This ideal forms the root of the collective’s practice, which seeks to engage with a greater audience on both aesthetic and social issues.

Rollins and K.O.S’s collaboration now spans over three decades and in its longevity is unprecedented in the history of contemporary art. By challenging the notion of sole or individual authorship, they have paved the way for today’s widespread collaborative practices. With participants ranging in age from 10 to 42 years old, Tim Rollins and K.O.S. have maintained a fluid group that has allowed members to evolve both individually and collectively since its inception in 1980.

The group is currently preparing for an upcoming solo exhibition at the Savannah College of Art and Design’s Museum of Art, Georgia, in February 2014.

Tim Rollins (b. 1955, Pittsfield, Maine) studied fine art at the University of Maine and earned a BFA from the School of Visual Arts in New York. After graduate studies in art education and philosophy at New York University, Rollins began teaching art for special education middle school students in a South Bronx public school. In 1984, he launched the Art and Knowledge Workshop in the Bronx together with a group of at-risk students who called themselves K.O.S. (Kids of Survival). In 1997, the documentary, Kids of Survival: The Art and Life of Tim Rollins & K.O.S. was widely received at the London Film Festival, Cinema de Real, France and the Hamptons International Film Festival.