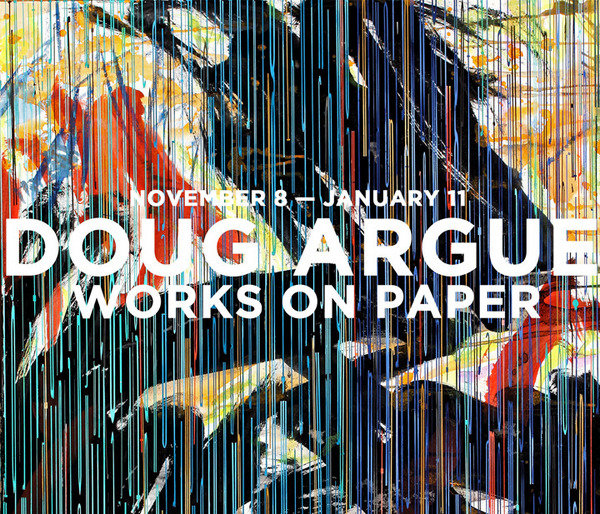 “Turning to the commonplace, the master of calligraphy equalizes discrepancies. Rain will fall, ice will melt, like a high-pitched voice, a sharp brush will move and spread like torrential water.”
– So Ching (239-303), The Force of Cursive Script (Ts’ao-shu shih)

Edelman Arts is pleased to present an exhibition of new works on paper Doug Argue. Admired for the spectacularly complex panoply of geometry and color in both oil paintings and gouache (the principal medium of the exhibition), Argue’s virtuosic style has earned major awards and critical acclaim since his New York debut at the New Museum in 1984 and his inclusion in such important public collections as the Weisman Art Museum and the Walker Art Center in his native Minnesota.

Argue subtle integrates letters and complete words in fluid, gestural cascades of elegantly controlled stands of color that convey a remarkable sense of motion. As the artist told the London-based magazine Ambit for an upcoming cover story, “I shape and create the letters I use and print vinyl stencils for each one. One of the things I have always loved about painting is how from far away one sees and image, let’s say a face, and when you get close it breaks down into brush strokes. Up close, my images convert in to letters.”

Born in 1962 in St. Paul, Argue studied at Bemidji State University and the University of Minnesota, and quickly became a star of the Minneapolis-St Paul art world. Major international awards soon followed including the Prix de Rome (1997), major grants from the Pollock-Krasner Foundation (1995), McKnight Foundation (1992) and National Endowment for the Arts (1987) as well as the London International Creative Competition first prize (2009).

Prior to two well-received solo exhibitions at Edelman Arts (The Study of Infinite Possibilities in April 2011 and The Art of Translation in February 2013), his work has been shown at Haunch of Venison and Associated American Artists in New York, and is in the collections of Random House Books, General Mills, Target, the University of Mennestoa, Minneapolis Public Library, Minneapolis Institute of Arts and Walker Art Center.

Traffic Art Space is a multi disciplinary art space that shows the works of a multitude of artists that includes emerging contemporary artists, photography, commercial artists—sometimes forgotten artists. TAS is an extension of Traffic Creative Management, a long established agency representing creative talent in advertising, design and publishing. TAS was born when the store-front in our building became available in the fall of 2009. How exciting to have a store-front to play with in NYC! It has allowed us to share the work of our artists with the public, as well as collaborate with curators and galleries in presenting artists and their concepts. There are no rules and there are no limitations, except the limitations of the mind— and we have to love it.

The gouache and watercolor works on paper will be on view from November 8, 2013, accompanied by a catalogue with an essay by cultural historian Charles A. Riley II, PhD. An opening reception for the artist will be held on Thursday, November 7, 6:00 to 8:00pm.