Bruce Nauman, Jannis Kounellis, Max Neuhaus, Lawrence Weiner and Gilberto Zorio are among the 8 artists featured in this group exhibition, which seeks to question our experience of sound through a range of immersive installations and augmented environments. 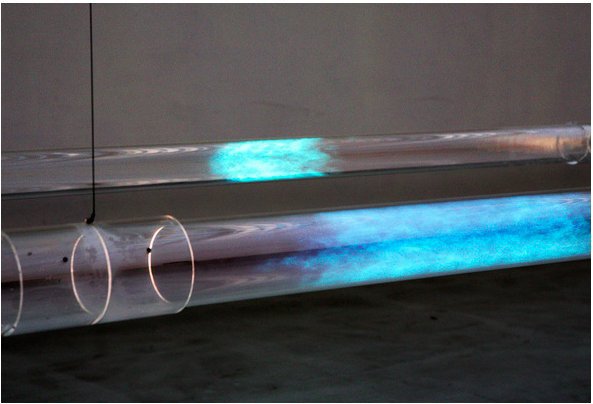 Examining the relationship between auditory and visual perception, as well as the extent to which sound functions as an affective trigger of personal memory and emotion, ANALOG demonstrates how artists have and continue to use noise as a powerful aesthetic in itself. Some of the works, which range in date from the 1960s to the present day, invite the viewer to actively participate – generating the echo of their own voices through recording equipment, or becoming immersed in a cacophony of fragmented arias.

Among the numerous works on display, Carsten Nicolai’s 334 m/s (2007) is specifically designed to visualise the speed of sound, which is around 334 m/s. To reflect this, propane gas is set alight within two translucent tubes, which produces a sonic boom and in turn issues wild flashes of fluorescent blue light as the flame burns from one side to the other. Minimalist in form, the work consists of cylindrical tubes, gas cylinders and wires, exploring the artistic potential of chemical processes.

Cyril de Commarque will be exhibiting Migrants (2013), a work that consists of bottles containing organ-like apparatuses, attached to a vascular system that resembles the shape of a boat. The piece represents a poetic limbo, being a metaphor for the forced emigration of peoples from their native countries, and the subsequent voyages that were undertaken in a desperate struggle for survival. The work emits the sounds of anonymous overlapping vocal messages, which become obscured by their own multitude, creating a sense of confusion and disorientation. These voices are incongruous to the pulsating organs from which they emanate, depersonalising the piece to the point that it becomes a collective allegory.

In Ignacio Uriarte’sThe Beach (2012), the sound of a typewriter carriage moving from right to left is presented stereophonically. This repetitive, formulaic process of typing acquires a new dimension, as its constant patterns begin to take on the hypnotic lull of a rolling tide. The audience thus becomes focussed on the unique qualities of the sound itself, now isolated from its mode of production.

Music is the primary subject of both Lawrence Weiner’s Deutsche Angst/The Memories of Stu Irwin (1981) and Jannis Kounellis’ Untitled (1971). Weiner’s piece is a musical collaboration with experimental composer Peter Gordon, which fuses the stabs of electronic synthesisers with elements of free jazz, percussive beats and spoken word. The result is a unique avant-garde composition in which disjointed elements compete for the listener’s attention, creating a distinctive soundscape in which the human voice becomes the remote protagonist of an unsettling musical narrative.

Unlike Weiner’s work, Kounellis’ Untitled incorporates physical performance, in the segmentation of a Divertimento by Wolfgang Amadeus Mozart. Played by students from the Leo Kestenberg Music School and Studio a’415 two days a week, the Divertimento is staged in fragmented form, with students only performing the same five minute section of the piece for a three hour duration. This structural dissolution of the Divertimento denies the listener the enjoyment and progression of the full piece, transforming rich classical melodies into an emotionally distant and unnervingly mechanical rendition. This process ties in with Kounellis’ use of fragmentation to express feelings of alienation in contemporary society.

Bruce Nauman’s Doppelgänger/UFO (1988) is comprised of a rotating steel beam to which two audio cassettes have been attached, exploring the aural phenomenon of the Doppler effect, where sound waves become distorted as the object is put into motion. Nauman urges the viewer to engage directly with dynamic sound, encouraging us to consider the everyday noises that flash past us with greater aesthetic appreciation, such as the rush of moving vehicles, or the fragments of overheard conversations that fill our ears within urban environments.

Exhibited for the first time outside of Turin is Max Neuhaus’ Three ‘Similar’ Rooms (1989), courtesy of Galleria Giorgio Persano. The large-scale installation – staged in the upper level of the gallery – comprises three seemingly identical rooms through which the viewer wanders, though each room actually contains a distinct aural experience as determined by its individual acoustics. The spaces themselves offer no indication of the origin of each sound, causing the viewer to experience these decontextualised noises in a pure, unfiltered manner.

Gilberto Zorio’s Microfoni (1968) presents a number of concrete breeze blocks on bases of ball bearings, above which microphones hang from the ceiling. Viewers are encouraged to stand upon the blocks and speak into a microphone, with their voice then echoing back through speakers in looped, distorted form. Via this abstraction of the human voice, Zorio’s work causes us to scrutinise the sound of our own speech and the ways in which we use verbal communication.

Through the exploration of these artists’ varying engagement with sound, ANALOG challenges the audience to perceive the noises of our daily life with greater reverence, triggering both a re-assessment of our aural experience of the world and a renewed appreciation and understanding of the nature of sound as an integral aspect of our sensory existence.