Open House. He was one of the founding members of Detsky Sad (Kindergarten), the legendary Moscow art squat active in the 1980s. This exhibition, is meant to expand the size of Roiter's 'luggage' to the dimensions of his 'studio' filling up the space of the entire four floors. 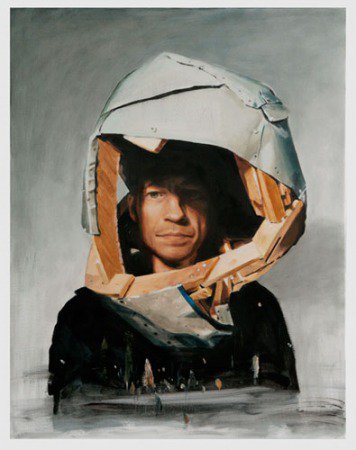 Special Guest program of the 5 Moscow biennale of contemporary art. The exhibition is a part of cross-cultural year Russia – The Netherlands 2013.

This will be the artist’s first large-scale exhibition in Russia. Roiter was one of the founding members of Detsky Sad (Kindergarten), the legendary Moscow art squat active in the 1980s. He has been living in the West for more than twenty years. Roiter’s previous Moscow exhibitions Suitcase Collection (Art Strelka Projects, 2005) and Approved Baggage (Regina Gallery, 2011) helped to introduce his image as an «artist/tourist» (the termed coined by Roiter himself) for the benefit of the Moscow public. Victor Misiano later elaborated on the definition in his article The Enchanted Wanderer or Andrei Roiter’s Journeyman Years. The exhibition «Open House», which was first initiated by the curator Olga Lopukhova several years ago, is meant to expand the size of Roiter’s «luggage» to the dimensions of his «studio» filling up the space of the entire four floors of the MMOMA venue at Yermolayevsky Lane. The works are put on display as a moving collage consisting of 3D objects, artifacts, photographs and videos, as well as his works on canvas and paper. The exhibition spans a 25-year period of the artist’s career. At this particular Moscow exhibition of his oeuvre, Roiter is for the fist time building a «spherical space» formed by «crystals —as food for the eyes and the mind. Searching for those crystals is the reason why the artist sets off on his real and imaginary journeys time and again. According to Roiter, the museum installation can be considered a «self-portrait.»

The «Open House» exhibition comprises more than 70 paintings, photographs, and objects courtesy of private and museum collections from the Netherlands and Russia. The exhibition is not arranged in chronological order; artifacts produced from 1986 to 2012 are put on view in each of the museum halls. Some of the halls are used for re-creating an ambience of the Moscow underground art scene in the 1980s as if to remind the spectator of the artist’s first «open studio» at the Detsky Sad squat.

Andrei Roiter’s «non-national» art revolves around the traveler’s notes, the observer’s optics, and the practice of collecting useless «souvenirs». It is the art that stems from the 1980s, the times when there were just a few people involved in contemporary art in Russia. In those years Roiter had first formulated a question he is still asking himself and the spectator these days: «What does it mean to be Andrei Roiter?». His painting My Russian Accent (2003) packs up the artist’s stock of words into an old canvas knapsack. Roiter picks up the knapsack and goes traveling around the world. Ever since, Roiter’s paintings have often contained texts, mostly short sayings in English. In terms of style, the artist’s artifacts retain that ineradicable «accent» expressed through the strong allure of a manmade object, far from the cold, impersonal and manufactured objects of the West.. By means of his work My Russian Eyes (2010) Roiter sort of acknowledges that once a person develops his vision, it remains with him across borders. Having armed himself with typical equipment of a tourist i.e. a camera that looks like a thing of gigantic proportions on Roiter’s canvases, the artist who had once tried wearing the mask of an «eternal traveler» — the mask is likely to stay on forever — is destined for the never-ending discovery of «new lands.»

However, there is one more person looking through the lens of the above camera at the same time. It is the person who keeps the distance. He also states for the record: «I’m not here.» The archaic character of the forms of Roiter’s artifacts does not originate from a sentimental longing for basic materials scarcely available in the Soviet era. Rather those antiquated forms arise from the fascination of the everyday and the collage-like world surrounding the human being. Roiter’s works are made of sketches and notes put down by an observer who is always on the move. The sketches and notes end up in his suitcases, which are sometimes opened by the artist years after the journey is over. That is why it is difficult to discuss an evolution of the artist called Roiter. He is a poet of nomadic motifs; they are embodied in his pictures produced in a variety of formats, in his humble but complex objects. This is the reason why his «collections» are arranged in a particular order based on the principles of collage; thus, an increasingly growing number of new and paradoxical relationships between the elements of the installation should be brought to light.

About the artist
Andrei Roiter was born in 1960 in Moscow. Studied in the Moscow Architectural Institute from 1978 to 1980. In 1977, Roiter took part in a group exhibition in Gorkom (Russian for «city council») of graphic artists in Malaya Gruzinsakya Street, Moscow. Nikolai Filatov, German Vinogradov, and Roiter worked as watchmen in a building that used to be a kindergarten in Khokhlovsky Lane. The derelict building later housed a community or artists called Destky Sad (Russian for «kindergarten»). Roiter’s works had become part of the exhibitions of the Soviet non-official art in Western Europe and the USA from the mid-1980s. The artist has been living in the West since the 1990s. His exhibitions were held in Germany, Switzerland, Sweden, USA and Japan. Roiter’s most significant exhibitions dating back to the period include the ones held in Basel Kunsthalle, San Francisco Museum of Modern Art, in Ludwig Forum in Achen, Kunsthalle Recklinghausen. He lives in Amsterdam and New York. Roiter’s exhibitions were held in a number of state museums of the Netherlands such as Stedelijk Museum Schiedam (2010), Stedelijk Museum Den Bosch (2010), and in the museums of other European countries e.g. Kunstmuseum Solothurn, CH (2011). His works were also exhibited in such galleries as Impronte Contemporary Art, Milano (2010), Laura Bartlett Gallery, London (2008), Jack Hanley Gallery, New York (2001), AKINCI Gallery, Amsterdam. The works of Andrei Roiter are kept in the collections of the following museums: The State Tretyakov Gallery (Moscow, Russia), Central Museum Utrecht (Utrecht, the Netherlands), Unicredit (Vienna, Austria) Akzo Nobel Art Foundation (Amsterdam, the Netherlands), Zimmerli Art Museum (New Jersey, USA), Ludwig Forum (Achen, Germany) et al.

About the curator
Irina Gorlova is an art historian and curator. In 2002 she was appointed head of the Art Programs Department of the State Center for Contemporary Art, Moscow, Russia.
Gorlova graduated from the Lomonosov Moscow State University, studying at History of Art Section of Department of History. Her recent curatorial projects include two exhibitions from the FRAC Bretagne collections «After the Painting», (State Center for Contemporary Art) and «Testing the Reality», (Vinzavod Center of Modern Art); «Manifests» held in Passerelle Centre d’art contemporain, Brest, France (2010); «Reality of Painting», an exhibition from the collection of Bonne Art Museum held in the State Center for Modern Art; «Russia XXI» (2013) at the Bilden aan Zee Museum and the Hague open spaces, the Netherlands. Gorlova also curated the exhibition «Portrait/Landscape: Genre Boundaries» held in the venues of the Moscow Museum of Modern Art and the State Center for Contemporary Art in 2012.