The well-known Israeli artist was one of the main figures in the Second Russian Avant-garde movement in the Soviet Union prior to immigrating to Israel in 1971. The project "Grobman: 4 Exhibitions" comprises four individual parts. 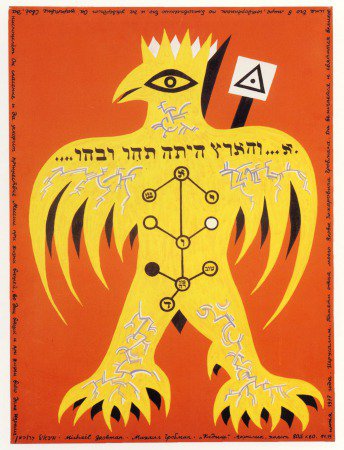 The art of Michail Grobman (b.1939), a well-known Israeli artist who was one of the main figures in the Second Russian Avant-garde movement in the Soviet Union prior to immigrating to Israel in 1971, is going to be displayed at the MMOMA at a full scale for the first time.

The project “Grobman: 4 Exhibitions” will comprise four individual parts. The four parts will be put on display on the four floors, respectively, of the museum venue at 17 Yermolaevsky Lane. Each of the four exhibitions is designed to tell the spectator stories relating to a different kind of history that should be interpreted in a different intellectual key; every part of the exhibition will help the spectator to immerse into a particular atmosphere pertinent to a different time and a place. Taken as a whole, the parts of the exhibition are meant to form a single artistic and biographic trajectory so that some personal and idea-based plot may be built and thought over by the spectator through his own efforts. Grobman’s oeuvre is of special interest to the Moscow spectator because the works he created in the 1960s can help fill the gap as to today’s ideas concerning the early stage of history of the Second Russian Avant-garde. Back then Grobman was the center of gravity within that special group of artists who were described as “spontaneous Existentialists” by Ilya Kabakov in his The Apology of Personalism in the 1960s.

Paintings and graphic works of “The 1960s in Moscow”, the first of the four exhibitions, run the gamut of Grobman’s ideas dating back to his Moscow period. The works show how he progressed from Abstractionism and Symbolism to Proto-conceptualism. It didn’t take long for Grobman to develop his own language that is apparently related to Western Modernism and the heritage of the Russian Avant-garde. His style is also influenced by icon painting and some theoretical works of Kazimir Malevich and the Futurists. Grobman’s “Moscow period” lasted a mere ten years yet those were the formative years for the development of the artist’s own philosophy and individual poetic codes. Those were the times when he made friends and became part of a group of like-minded individuals. Those years saw Grobman coming up with an unusual idea that would eventually become one of the reasons why he left for Israel. He put forth a new strategy for developing the Jewish art. Grobman believed that the Jewish art could have taken the lead in modern art process if the art had emerged from the Jewish philosophy, which has its deep-rooted abstract principles. According to the artist, the art resting upon Chagall’s ethnographic and domestic concepts was no good for accomplishing the mission. The energy of the Creation was the central philosophical subject for Grobman while Leviathan, a mystical sea monster of the Jewish tradition, became the main visual symbol of his works. Grobman’s works of the above period (“Porcelain Man”, “Winged Cup”, “Leviathan”) are replete with forms and symbols relating to the artist’s ideas of the principles of the Creation. In the meantime, Grobman was one of the first artists whose works began to incorporate collage pieces, texts and political images.

The second exhibition “Leviathan” centers on Grobman’s “new Jewish art” and his attempts to transform his approach into the Grobman school. In 1971, he left for Israel with an intention of becoming the founder of new Jewish art. The artist settled down in Jerusalem. He set up an art group and fulfilled his ideas with the assistance of the latter. Grobman carried out a number of performances and happenings in the vicinity of the Dead Sea and in the streets of Israeli cities. At the same time he produced a number of critically acclaimed conceptual works. Some of the works are executed in genres devised by Grobman himself. The exhibition will show the photographs of the performances in Judean desert shot on location, paintings, graphics, 3D objects, and designs of performances and installations which were never brought into realization.

The third exhibition “Picture = Symbol + Concept” consists of paintings dating from the 1980s and the 1990s. Grobman revised his philosophical and aesthetic program in those years. He moved from the mythology of the Creation to the study of its results. Obvious imperfection of the results is analyzed by Grobman in a sarcastic manner. The artist prefers to take a look from “below” while considering nature and man. The low-browed and long-nosed profile of a “fool” takes the place of the mystical Leviathan in Grobman’s works. The “fool” is a composite of some stranger, a commoner who is always keen to make judgments about the universe, nature, and the social order. Numerous immigrants from the USSR played a significant role in making the commoners’ stratum of Israeli society look particularly heterogeneous and comical. As a result, the world of Zionism, and those involved in major and minor politics of the Middle East started speaking in a wooden style that was brought in by the former Soviets who had been hoping to find their own paradise in Israel. The painting “Lenin’s Mausoleum in Tel Aviv” became a visual symbol of that social hybrid.

The final fourth part of the exhibition is titled “Grobman: After Art”. It seems to put the following question: Do the works displayed over here belong to art? Many a thing that we’re going to see – especially some recent works in which an odd concoction of eroticism and politics, mysticism and evil laughter, obscenity and seriousness can strike our eyes – form the grounds for putting the question differently: Does the artist believe that today’s public deserve to enjoy art and beauty or the only thing the spectator is worthy of these days is an outright and rude statement?

The exhibition comprises the works provided by courtesy of the Tel Aviv Museum of Art, the State Russian Museum, Minotaur Gallery in Tel Aviv and private collectors. A book will be published in collaboration with Novoe Literaturnoe Obozrenie (New Literary Observer) publishing house for the opening of the exhibition. Besides, Michail Grobman and Lola Kantor-Kazovsky will deliver a series of lectures and take part in a number of meetings. Films about Grobman and the Second Russian Avant-garde will be sreened in the Jewish Museum and Tolerance Center and at the MMOMA.

About the artist:
Michail Grobman (born 1939 in Moscow) is a painter and a poet. He took part in the Second Russian Avant-garde movement. Founded the Leviathan art group and published an eponymous periodical. In collaboration with Irina Vrubel-Golubkina has been publishing Zerkalo magazine since 1993. Selected writings: “Military Notebooks”, Tel Aviv, 1992; “Leviathan”, New Literary Observer, Moscow, 2002; “In the Black, Black Country”, Carmel, 2005; “Last Sky”, New Literary Observer, 2006; “Leviathan”, Carmel, 2009. Selected personal exhibitions: 1971, Tel Aviv Museum of Art; 1988, Art Museum, Bochum, Germany; 1999, The State Russian Museum. The artist lived in Moscow before emigrating from the Soviet Union to Israel in 1971. He lives in Tel Aviv.

About the curator:
Lola Kantor-Kazovsky was born in Moscow. She is an expert in the history of European art and architecture. Her selected publications include “Piranesi as Interpreter of Roman Architecture and the Origins,” Florence, 2006. She used to be a curator/researcher with the Pushkin Museum of Fine Arts. At present Kantor-Kazovsky is a senior lecturer in the history of art at the Hebrew University of Jerusalem. She is also engaged in research of the history and issues relating to the Second Russian Avant-garde. Kantor-Kazovsky was a co-curator of the exhibition “The Second Avant-garde” held in Paris in 2007. She lives in Jerusalem.