Pascale Marthine Tayou's works not only mediate in this sense between cultures, or set man and nature in ambivalent relations to each other, but are produced in the knowledge that they are social, cultural, or political constructions. Gerry Bibby and Juliette Blightman each develop a project that utilizes the institution and its resources to the benefit of their own artistic practice. 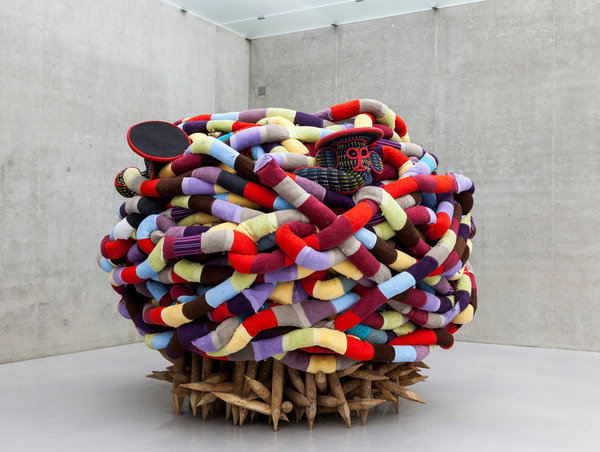 Pascale Marthine Tayou
I love you!

Ever since the beginning of the 1990s and his participation in Documenta 11 (2002) in Kassel and at the Venice Biennale (2005 and 2009) Pascale Marthine Tayou has been known to a broad international public. His work is characterized by its variability, since he confines himself in his artistic work neither to one medium nor to a particular set of issues. While his themes may be various, they all use the artist himself as a person as their point of departure. Already at the very outset of his career, Pascale Marthine Tayou added an »e« to his first and middle name to give them a feminine ending, thus distancing himself ironically from the importance of artistic authorship and male|female ascriptions. This holds for any reduction to a specific geographical or cultural origin as well. His works not only mediate in this sense between cultures, or set man and nature in ambivalent relations to each other, but are produced in the knowledge that they are social, cultural, or political constructions. And it is in this context that Tayou negotiates his African origins—he was born in Nkongsamba, Cameroon, in 1966—and related public expectations. His crystal glass figures, the Poupées Pascale, for instance, are quotations of so-called »African tribal art« that reference the artist’s home country; but, at the same time, their choice of material alludes to European handicrafts. Furthermore, his experiences during multiple trips along the highways and byways of the world have established a foundation for his artistic activity. What does it mean when Pascale Marthine Tayou titles his Kunsthaus Bregenz exhibition I love you!? Is he referring to the group exhibition Love is Colder than Capital that took place at the same venue almost exactly a year ago, and where his huge rotating sphere Empty Gift filled with more than 1,000 empty but elaborately wrapped gifts was a favorite amongst the public?

Or is it a declaration of love addressed to the institution? The emotional exuberance the title expresses is conveyed by his solo exhibition especially conceived for Kunsthaus Bregenz, with its profuse and lavish presentation uniting diverse media from drawings and objects to large-scale spatial installations. This overflowing show of new works on three floors of the Kunsthaus creates the impression of a gesamtkunstwerk, with individual exhibits setting up an intensive dialogue, not just with each other, but with visitors as well. His installations are not confined to the three floors, but also take over the stairways like living organisms. Here, in addition to a favela consisting of several hundred bird cages, are wooden stakes made of sharpened tree trunks and narrower, painted versions that call to mind Mikado sticks.
In cooperation with the vorarlberg museum the Kunsthaus is presenting a sculpture reminiscent of Constantin Brancusi’s The Endless Column in the 20-meter high foyer of the vorarlberg museum. Unlike Brancusi’s column of 1937|38, which was made of iron, a material typically used for sculptures, Tayou creates his version from simple cooking pots, incorporating everyday objects in art in his characteristically humorous way.
As he often does, Pascale Marthine Tayou will be using numerous people of different ages and from a range of social and professional backgrounds to help him realize his works in Bregenz. This will include a cooperation with the Vorarlberger Kraftwerke AG, whose trainees are a part of the installation team. Tayou will also be inviting other young people, school children, and adults to help tell a love story as varied as the actors taking part in it. The procedure illustrates Tayou’s distrust of a heroic image of the artist that sees the author as a detached, aloof figure, as well as revealing his genuine interest in other people. The title of his Bregenz exhibition could also be interpreted in such a manner.
The Kunsthaus Bregenz show is his first large-scale solo exhibition in Austria.

There is a remarkable disparity between the expectations and the realities of contemporary art production today. It is becoming increasingly difficult to meet the demands of a career as an artist in an ever-expanding, forward-moving art world. Performance art specifically has garnered a significant amount of attention in the recent years, but this has mostly been manifested merely as a perpetuation of the event-based consumption of art by an increasingly expectant audience. As the goals of the KUB Arena program have always been grounded in the exploration of new exhibition formats for unique encounters with contemporary art, the 2014 program will kick off by inviting two ground-breaking artists, Gerry Bibby and Juliette Blightman, to each develop a project that utilizes the institution and its resources to the benefit of their own artistic practice at their own discretion. By creating a kind of ‘residency’ for each artist, the KUB Arena will be activated as a site of production, reflection, and dialogue.

The artistic production of Gerry Bibby is intentionally difficult to pinpoint, but thereby plants its foot in yet uncharted territory. He is known for works that emerge through both self-consciously complicated and calculatingly precise sculptural gestures that are inhabited by beautiful elements of text and carefully choreographed yet wildly haphazard performance. His specific blend of sculpture, poetry, and performance locates Bibby’s practice as an inspiring and inventive redefinition of artistic process – one inscribed with playful subversions and strategic projections of complex cultural references.