Construction and individual mythology. The exhibition examines the ways in which artists, like poets, endeavoured to transform the idea of the biographical account and broke with the conventions of biographism to elaborate freely on the basis of certain elements taken from their own life history. 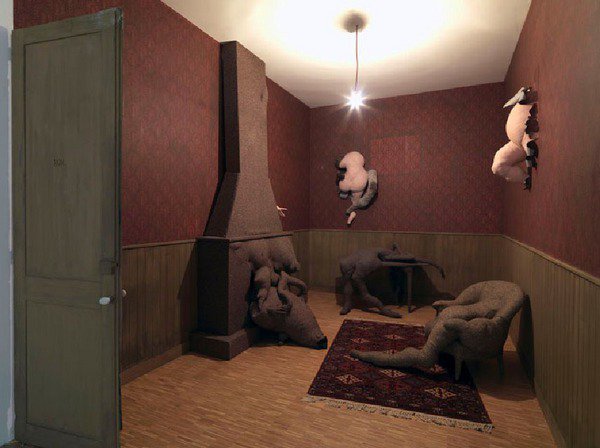 Ever since Giorgio Vasari wrote The Lives of the Most Excellent Painters, Sculptors, and Architects (1550-1568), the “life and work” schema has governed common and predominant practice in art history. This schema brings a sense of coherence to all kinds of relationships between artists’ works and biographies. It was questioned systematically during the second half of the 20th century with the development of structuralism, which had its heyday in the late 1960s. But the critique of biographical illusion can be found in an older history of modern art and poetry. In the 1920s Robert Musil, author of The Man Without Qualities, wrote: “In the basic relationship they have with themselves, nearly all men are narrators. They do not like poetry, or only at times. [...] What they do like is an orderly chain of events, because it has the appearance of necessity, and the feeling that their lives follow a ‘course’ gives them a kind of shelter in the midst of chaos”.

The exhibition examines the ways in which artists, like poets, endeavoured to transform the idea of the biographical account and broke with the conventions of biographism to elaborate freely on the basis of certain elements taken from their own life history. However, autobiography is only a limited genre within a field of experimentation that spills over the conventional boundaries of subjective experience.
Franz Kafka displaces autobiography towards construction when he writes: “Writing denies itself to me. Hence plan for autobiographical investigations. Not biography but investigation and detection of the smallest possible component parts. Out of these I will then construct myself”. The idea of biographical forms chimes with this project of construction or reconstruction.

The historical avant-gardes favoured the life of forms and the utopian concept of the “New Man” over biography and its historical incarnations. Life “had to be changed”. But this formula was associated in Rimbaud with an assertion: “I is another”. This intimate otherness is the condition of an experimental individuality, whose individual mythology was a recurring form open – like the myth itself – to all sorts of symbolic transformation.

The concept of “Individual Mythologies” is a historical one. Borrowed from Romantic literary criticism, it appears in art vocabulary in the early 1960s to define the work of sculptor Étienne-Martin. It essentially describes a way of transcending the data in the civil register, as well as the chronological order of lived experience. In this, the poet Gérard de Nerval was ahead of Max Ernst and Raymond Hains.

Gérard Labrunie adopted the name Nerval from a property owned by his mother’s family. The pseudonym, the first act of biographical reinvention, can be found, for example, in Claude Cahun, the artist engaged with the Surrealist movements, and in the Austrian artist VALIE EXPORT. This kind of genealogical reinvention often comes from a childhood place or from an imaginary geography. Charles Meryon’s etchings, which transfigured old Paris, were the matrix of Surrealist Paris. Dorothea Tanning reinvented the motif of the lovers’ bedroom by projecting it into a chimerical and ecstatic space.

Biographical legend, produced in the construction of an individual mythology, is a critique of biographism; it gives shape to the identity crises experienced by individuals in their various cultural and social relations of belonging. A space of crisis takes the place of established references. This space is outlined in a psychographic activity, it is performed, it is staged, it is literally dramatised. The “bio-objects” of the theatre of Tadeusz Kantor respond to the drama of life painted by Edvard Munch. The form of constructive assemblage is displayed at both extremes (Ed Templeton and Henrik Olesen), by accumulation or by reduction of the figure. Between the tableau form (Jeff Wall) and film (Robert Bresson), photography has provided many artists with the privileged support of a writing of memory, linked to the collective imaginary. In Santu Mofokeng and Ahlam Shibli, this writing is also a protestation of existence.

Free gallery talks
Every Thursday and Saturday at 7:15 p.m.
A propósito de... Formas biográficas
limited to 25 people
No prior registration is required