In its 15 years the fair for modern and contemporary art has become an international institution, combining the world's leading galleries with an exceptional program of arts events throughout NY. This year the Focus showcases diversity of contemporary art in China; inside the fair opens the exhibition Venus Drawn Out: 20th Century Drawings by Great Women Artists. 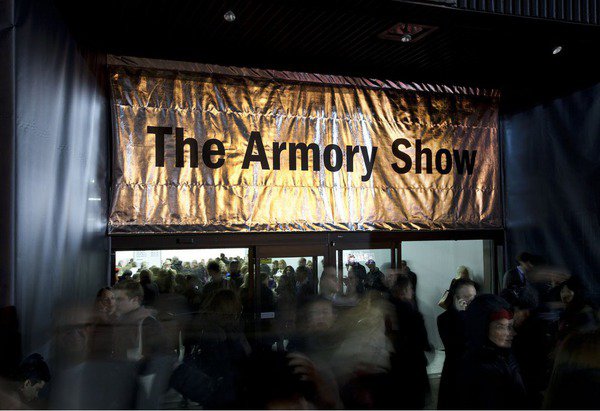 The Armory Show is New York’s leading fair for modern and contemporary art. A seminal event in the annual New York arts calendar, the fair spearheads Armory Arts Week, a city-wide program of cultural events and exhibitions. The Armory Show 2014 will again feature an acclaimed VIP program, a lively opening night party at the Museum of Modern Art and the engaging Open Forum discussion series. This year’s fair will also coincide with the opening of the 2014 Whitney Biennial in early March, further enhancing the line-up of Armory Arts Week events planned in partnership with New York’s cultural institutions, and attracting a wide scope of international collectors, curators, scholars, and press.

The Armory Show is a leading international contemporary and modern art fair with exceptional connections with American collectors, Museums Groups and the broader public. Each March selected international and American galleries present key artworks of the 20th and 21st centuries, in the fair’s central Manhattan location at the city’s historic Piers. In the last fifteen years, the fair has become an international institution combining a selection of the world's leading galleries with an exceptional program of arts events and exhibitions throughout New York during the celebrated Armory Arts Week.

Armory Focus, the curated section of The Armory Show, highlights the gallery and artistic landscape of a chosen geographic region. For the 2014 edition of the Fair, Philip Tinari, Director of The Ullens Center for Contemporary Art, Beijing, will curate Armory Focus: China, shining new light on the country’s contemporary cultural practice. In recognition of the dynamism of the Chinese art scene, The Armory Show will present an exciting selection of contemporary Chinese galleries, providing a forum for an ever-expanding international conversation at the fair.

On lending his curatorial vision to the project Philip Tinari notes that, “China is central to the makeup of the world system today in ways that are well understood on the level of geopolitics but have not yet been fully elaborated in the realm of culture. The wave of national surveys—the so-called "China Shows"—that introduced the first generation of Chinese artists to New York has come and gone, leaving even a decade later an aftertaste of gaudy, symbolic, often derivative work. This persistent memory clouds efforts by individual actors to illuminate the dynamism, seriousness, and originality of the Chinese art scene and system today. This section aims to change that."

Noah Horowitz, Executive Director of The Armory Show states, “Just as Focus: China hopes to showcase the strength and diversity of players who now make up the country’s cultural scene it also seeks to complicate and destabilize prevailing Western notions about its artistic situation. The project ultimately aims to demonstrate that China is not just a site for great new art, but a place where current art world models are being made and remade, and where serious collecting is happening at an ever larger scale. We are honored to collaborate with such a visionary curator as Philip on this project and look forward to presenting the results of his extensive efforts at the fair next March."

Aiming to showcase the diversity of both artistic production and the art system in China, the section will include curated presentations by some twenty artists coming from diverse generational and regional backgrounds, ranging from the "Stars" generation of the late 1970s through the booming post-Mao generation born after 1975. A program of talks will elaborate some of the key issues for contemporary art in China today, from the development of the institutional infrastructure to the ongoing diversification of the Chinese market.

The Armory Show is New York’s leading fair for modern and contemporary art. A seminal event in the annual New York arts calendar, the fair spearheads Armory Arts Week, a city-wide program of cultural events and exhibitions. The Armory Show 2014 will again feature an acclaimed VIP program, a lively opening night party at the Museum of Modern Art and the engaging Open Forum discussion series. Next year’s fair will also coincide with the opening of the 2014 Whitney Biennial in early March, further enhancing the line-up of Armory Arts Week events planned in partnership with New York’s cultural institutions, and attracting a wide scope of international collectors, curators, scholars, and press.

About the Armory Focus Curator
Philip Tinari is director of the Ullens Center for Contemporary Art in Beijing. There he oversees an exhibition program devoted to established figures and rising talents both Chinese and international, aimed at UCCA's annual public of more than half a million visitors. Prior to joining UCCA he was editor-in-chief of LEAP, the international art magazine of contemporary China, which he founded and ran from 2009 to 2011. He has worked as China representative for Art Basel, contributing editor to Artforum, and lecturer in art criticism at the China Central Academy of Fine Arts. Tinari, who speaks fluent Mandarin, holds degrees from Duke and Harvard, and was a Fulbright fellow at Peking University.

About The Ullens Center for Contemporary Art (UCCA)
The Ullens Center for Contemporary Art is an independent, not-for-profit art center serving a global Beijing public. Located at the heart of Beijing's 798 Art District, it was founded by the Belgian collectors Guy and Myriam Ullens and opened in November 2007. Through a diverse array of exhibitions with artists Chinese and international, established and emerging, as well as a wide range of public programs, UCCA aims to promote the continued development of the Chinese art scene, foster international exchange, and showcase the latest in art and culture to hundreds of thousands of visitors each year.

The Armory Show 2014 – Modern is pleased to present Venus Drawn Out: 20th Century Drawings by Great Women Artists, as the inaugural, curated project to take place on Pier 92 Modern. Curated by Susan Harris, this exhibition will focus exclusively on drawings made by innovative, female visionaries in the 20th century and will be comprised of works for sale selected by the curator from submissions made by galleries participating in the fair.

Venus Drawn Out will present an account of modern art through a cast of protagonists who are often underestimated when compared with their male counterparts. The intimate and direct genre of drawing is ideally suited to this “exhibition within an art fair" as an expressive vehicle to present a vast range of personal, aesthetic, and intellectual investigations.

Venus Drawn Out will also include three large-scale drawing projects dispersed throughout the pier—highlighting a special, site-specific, wall drawing by Pat Steir executed expressly for The Armory Show to further reinforce and bear witness to the rich, invaluable and timeless legacy of twentieth-century women artists.

About the Curator
Susan Harris is a freelance curator and writer of contemporary art based in New York City. She has a Master’s Degree in Art History from the Institute of Fine Arts at New York University. Her recent curatorial and publication projects include Toxic Beauty: The Art of Frank Moore for the Grey Art Gallery, New York University and Pat Steir: drawing out of line for the RISD Museum of Art and the Neuberger Museum. She also curated Jim Hodges: A Line to You, and Nancy Spero: Weighing the Heart Against a Feather of Truth—both of which took place at the Centro Galego de Arte Contemporanea in Santiago de Compostela, Spain. She curated two Richard Tuttle exhibitions at the MuseuSerralves in Porto, Portugal and at the Centro Galego de Arte Contemporanea in Santiago, Spain, and authored the publication, Richard Tuttle: Memento/cENTER that accompanied these exhibitions. Prior to this, she was a curator of The American Century: 1950-2000 at the Whitney Museum of American Art. She is also a contributing writer for Art in America and The Brooklyn Rail.

The China Symposium Saturday & Sunday, March 8-9, 2014
Organized by Philip Tinari, Director of the Ullens Center for Contemporary Art, Beijing.
The Armory Show is pleased to announce The China Symposium, a program of conversations that aims to elaborate and clarify the state of contemporary art in China today. In partnership with Adrian Cheng and his art foundation, a series of eight discussions will be held over the two most visited days of The Armory Show (March 8-9, 2014). The China Symposium will assemble speakers from around China and beyond, including leading artists, journalists, curators, collectors, gallerists, and academics. The Symposium is held in conjunction with the Armory Focus: China section of the fair, which is being curated by Philip Tinari, Director of the Ullens Center for Contemporary Art, Beijing, and will provide new insight into contemporary cultural practice in China through an exciting selection of galleries from the Mainland and Hong Kong. The first day of the forum explores circumstances and dynamics shaping the external environment, while the second day looks at significant currents in art itself. Together the two days offer perhaps the most comprehensive overview of the art scene in China yet undertaken for a general New York audience.