The monographic show of Jacques Julien is a specific project composed of recent works: a substantial series of sculptures in different formats. Guillaume Leingre presents a photogram, a photographic image made without a camera which was produced for this show. Developing an essentially sculptural and installational work, Guillaume Constantin regularly designs, displays or creates interventions in pre-existing exhibition arrangements. 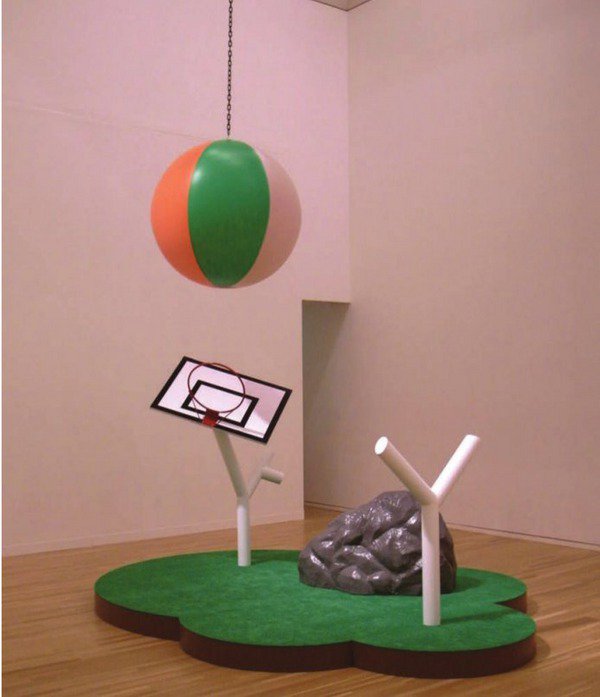 From 28th February to 9 June 2014, the CRAC Languedoc-Roussillon is presenting an exceptional exhibition by French artist Jacques JULIEN entitled "Tailles Douces". This monographic exhibition is a continuation and development of his work, and follows two major personal exhibitions dedicated to him successively in 2011 and 2012: "Dur comme plume et léger comme pierre" (Hard like feather and light like stone) at the contemporary art centre in Chamarande and "Vieux tacots et ruines récentes" (Old crates and recent ruins) at the "La chapelle de Genêteil" contemporary art centre.

This first major Jacques Julien monography in France presents a specific project composed of recent works (most created within the last three years) and previously unseen works produced in relation to the very specific configuration of the CRAC exhibition spaces. A substantial series of sculptures in different formats - arranged on the floor, leaning on the walls or suspended between the floor and the ceiling - line the ground floor rooms in order to put the main issues of the artist's work into perspective.

"... One sculpture is a starting point, two sculptures is a direction, three sculptures is already a territory..." the artist explains. The appearance of the work and the questioning of space come face to face with the questioning of the scale of the works and the exhibition format. "Tailles Douces" allows us to discover all of the aspects of Jacques JULIEN's work from a "perspective" rather than a "retrospective" point of view.

Jacques JULIEN was born in 1967 in Lons le Saunier, he lives and works in Paris and Montdidier (80). He studied at the Ecole des Beaux Arts in Nîmes and the Ecole des Beaux Arts in Grenoble, and teaches at the Ecole Nationale Supérieure d’Architecture de Paris la Villette. The artist has been coming to Sète and the Languedoc Roussillon region since the 80s, and, among other things, was invited to stay and exhibit at the research and meeting workshops in 1993 at the Villa Saint Clair artist studios in Sète.

Following this, he participated in several exhibitions in the Languedoc Roussillon region at the invitation of Ami Barak director of the FRAC, Christine DOLBEAU director of the Espace Paul BOYER, and then the CRAC in 1997, 2000, 2007 and 2008 as part of various joint projects.

Two artist's books dedicated to him have been published by Edition VSC in Sète. His works are displayed in the Languedoc Roussillon FRAC collection and are included in public and private collections both in France and abroad, FRAC Museums, private foundations etc.

5,000 K designates a temperature of neutral or intermediary colour between hot light (1,000 K, orangey) and cold light (22,000 K, blue). K for kelvin. The temperature of a light source is established using a "theoretical" black body heated to white-hot. It changes colour when it is heated.

The exhibition presents a photogram, a photographic image made without a camera or a negative. A technique that has existed since the early days of photography (mid 19th century. Henri Fox Talbot). It was produced at the Art Centre for the exhibition. Upstairs, a 30-metre long photogram of a BMW motorcycle, a white silhouette extended by the trail of its headlights, follows on from the "Walking Into The Distance Beyond Imagination" wall painting, like a nod to the Hamish Fulton exhibition. It could be called "Riding a Motorbike Beyond Imagination".

A section of wall appears on the photogram, creating a low-angled light having bounced off the paper. This photogram is the image of speed on a medium that is fast in itself. The speed of light, even a second of which exposes the paper, i.e. darkens it. The speed of the motorcycle, which seems ready to set out on the road represented by the 30-metre long roll of paper. A ghostly motorcycle, as if emerging from the night. Its eeriness is accentuated by the colour of the headlight trails: not white like in reality (on the road at night) but dark black. Inverted. In negative. Light produces dark.

Guillaume LEINGRE was born in France.
He lives and works in Paris.

Guillaume CONSTANTIN's work is based on analogies and anachronisms. Whether in the choice of materials (often semi-processed), the type of formats (photographs, readymades, found objects etc.), in the sources used or the withdrawals and the displacements that he proposes, the question of the object's materiality and temporality, which inevitably refers to that of the work of art and its daily derivatives, is raised.

Ambiguous works are thus spread out which ricochet off one another becoming a play on the medium, the format, a tribute, a deflection, a reappropriation in turn.
«Appropriation, recycling, diversion and other displacements, transformations and deformations occupy the work of Guillaume CONSTANTIN. Developing an essentially sculptural and installational work, he regularly designs, displays or creates interventions in pre-existing exhibition arrangements, particularly in museums, questioning the relationship of the artwork or the objects, its collections and its presentation and circulation modes, its history, within the different contexts that can create tension between preservation and extinction, visibility and absence. The artist thus literally brings the exhibition back into play while proposing a rewriting and a re-reading, summoning memory and remnants of the past»
Anne-Lou VICENTE, Raphaël BRUNEL and Antoine MARCHAND
His work has been seen in many group exhibitions, international fairs, FRAC and art centres. Guillaume CONSTANTIN is also head of visual arts at Instants Chavirés (www.instantschavires.com).

In 2013, he participated in the exhibitions "Time vs Machine" and "Comme à l’Agora" (Like at the Agora), the second and third sections of the exhibition cycle "On n'est pas sorti de l'objet" (We haven't left the object) organised by Fabienne BIDEAUD and Ann GUILLAUME at La Box (Bourges), and Gaël CHARBAU's project "The French Haunted House" at the Sung-Eung Space in Seoul, among other group projects.

Recently, for the exhibition "La méthode des lieux" (The method of places), third section of the cycle "LE TAMIS ET LE SABLE" (The sieve and the Sand) at the Maison Populaire in Montreuil, Guillaume CONSTANTIN was entrusted with the creation of a scientific display, a work of art in its own right into which propositions and/or interventions from other artists in the exhibition are integrated and dialogue. In spring 2014, the exhibition "La Constante des variables", presented at the CARC LR from 28th February to 11th May 2014, is produced in partnership with the Conservatoire of Anatomy, University Montpellier I, UFR Medicine and Paul Museum Valéry in Sète.
In parallel, Guillaume Constantin is preparing two personal projects, the first with the Champagne-Ardennes FRAC in Reims and the second at the Galerie Bertrand Grimont (Paris), which has represented him since 2011 (www.bertrandgrimont.com).