How to do things with[out] words. This exhibition enhances performativity and the way it works, the way it performs itself. It includes objects, media as well as bodies. It will be "live" at all times, as installations, photography, films, discussions, inhabit the space of the museum. 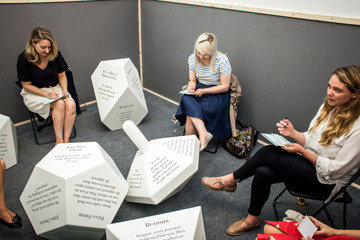 Performance and performativity are centre stage at this time. One can think of many reasons why. The fact that we are living more and more in an “immaterial” world, dominated by mediatisation (which some call spectacle), the impact of globalization, the increasing tendency to think of politics as biopolitics, these different factors enhance performance over materiality, or object making. Performativity explores the space in-between, what happens when bodies or objects are left to perform. To perform is to enable oneself or things to work through form. And to let form speak for itself.

Performing and performance are concepts that activate reality. They are at play with the world. The outcome is non-linear, non-unidimensional. It opens up the real into a multifaceted and complex organism. In this sense, performativity (what performing and performance activate) offers resistance against a homogenization of the world. It leads to renewal, change, and expands the potentiality of things and beings. In a world formatted by capital and the weight of history, we need change, we need performativity to unblock minds and situations.

This exhibition, conceived as an event, will enhance performativity and the way it works, the way it performs itself. It will include objects, media as well as bodies. It will be “live” at all times, as installations, photography, films, performances, discussions, inhabit the space of the museum.

The subtitle of the exhibition, given by the concept “per / form”, is driven from John Langshaw Austin, the English philosopher who was one of the founders of analytical philosophy and pragmatics. In 1955, he gave a lecture called “How to do Things with Words” in which he explores the relationships between acts and language. The book published in 1962 is often quoted when discussing performance and art. This exhibition further explores that relationship through different situations proposed by the exhibition format itself and by the works presented and activated in its midst. Per/Form refers to the way performativity functions in contemporary art. In Latin, “per” means to go through, to pass through, it can also relate to purpose or meaning. “Form” is a way in which an idea develops into a shape, the way in which it acquires presence in the world.

The project, a laboratory situation including installations, workshops, and performances, will explore these questions of how art deals with reality in a performative way. How artists use forms to create meanings, or rather multiple and open-ended meanings. Here meaning is not fixed, it fluctuates as relations between things, ideas, people are activated. The activation can be produced in many ways. Some works activate legal texts or situations, historical and institutional displays, the way knowledge is constructed, how political life is organized today, and was so in historical situations, language and body, the idea of the common, the idea of the museum or of art or art-making as an institution, how visuality interplays with images and sound, how the body interacts with the reality of percepts such as image or sound.

The project consists of different modes of “display”: the exhibition per se which brings together 16 installation works, some of which include live elements, others which can be activated live in different ways, in situ works which will be activated in the city, and performative situations which will be concentrated in three days throughout the project. These are the Intensity Days, March 22, May 10 and September 22. These days will work with the concept of “intensity”, as outlined by Jean-François Lyotard in defining what characterizes a work of art seen as a situation. During these days, there will be further activation of some of the installations, workshops, talks, discussions, and performances. The Intensity Lab, a space included in the exhibition, will host some of the the later, and archival material corresponding to the whole project and its developments.

Chantal Pontbriand is art critic and curator. Her work is based on the exploration of questions of globalization and artistic heterogeneity. Since 1970, she has curated numerous international contemporary art events: exhibitions, international festivals and international conferences, mainly in photography, video, performance, dance and multimedia installation. She founded PARACHUTE contemporary art magazine in 1975 and acted as publisher/editor until 2007. In 1982 she was president and director of the FIND (Festival International de Nouvelle Danse), in Montreal. She was appointed Head of Exhibition Research and Development at Tate Modern in London in 2010.

PUBLICATION
A book will be published including texts by Jean-Pierre Cometti, Amelia Jones, Antonio Negri, Chantal Pontbriand, and José Antonio Sanchez. The artists will contribute to the book in the form of visual essays. Editor: Chantal Pontbriand. Designer: Agnes Dahan. Publisher: CA2M/Sternberg Press.

CA2M Centro de Arte Dos de Mayo
Av. Constitución, 23 28931 Móstoles Madrid
Opening times:
From Tuesday until Sunday 11:00 a 21:00 h.
Free admission to the center and to all his activities