Interalia 2014. Inspired by notions in T-duality and mirror symmetry in string theory, these sculptures and drawings are borne out of collaboration and exchanges of ideas with Dr David Berman from Queen Mary University of London. 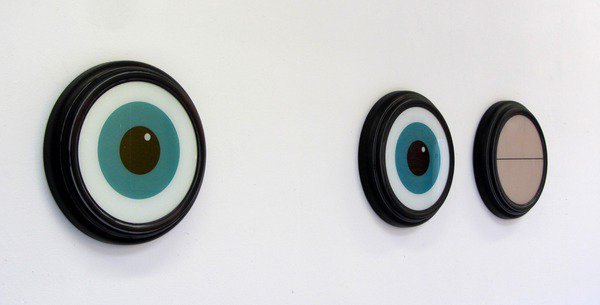 CHELSEA space presents Interalia 2014, an exhibition of sculptures and drawings by artist Grenville Davey. This work, inspired by notions in T-duality and mirror symmetry in string theory where there are surprising pairings of objects, is borne out of collaboration and exchanges of ideas with Dr David Berman from Queen Mary University of London.

The viewer is challenged to see beyond difference and explore the relationships between pairs. While some objects are “self-dual”, others vary enormously and yet their relationship remains the same. Along the way, there are hints and nuanced details that move the work out of the abstract realm into the human one. Although inspired and founded on the T-duality notion in string theory this work is not constrained by it and in that sense it also reflects a response of an outsider to the exotic academic environment of contemporary theoretical physics.

British artist Grenville Davey won the Turner Prize in 1992 for his exhibition of that year at the Chisenhale Gallery. Davey has exhibited extensively across the UK and Europe. He is now the Programme Leader of MA Fine art, University of East London and a visiting Professor of the University of the Arts London. Most recently he has undertaken residencies at the Isaac Newton Institute for Mathematical Sciences, Cambridge and the Centre for Research in String Theory, Queen Mary University of London.

Publication
As with each exhibition at CHELSEA space, a new illustrated publication will accompany the show.

Chelsea College of Arts is one of the world’s leading art and design institutions. Located at Millbank, next door to Tate Britain, Chelsea specialises in Fine Art, Graphic Design and Interior and Textiles Design. Since its origins in the 19th century, the College has produced many of the greatest names in the arts, including: Quentin Blake (illustrator and author) Ralph Fiennes (film and stage actor), Anish Kapoor (sculptor), Steve McQueen, (artist), Chris Ofili (artist), Alan Rickman (film and stage actor), Alexei Sayle (comedian) and Gavin Turk (sculptor).
Operating at the heart of the world’s creative capital, University of the Arts London is a vibrant international centre for innovative teaching and research in arts, design, fashion, communication and the performing arts. The University is made up of six Colleges: Camberwell College of Arts, Central Saint Martins College of Arts and Design, Chelsea College of Arts, London College of Communication, London College of Fashion and Wimbledon College of Art. Renowned names in the cultural and creative sectors produced by the University include 12 Turner prize winners and over half of all nominees, 10 out of 17 fashion designers named British Designer of the Year, more than half of the designers showcased in London Fashion Week and 12 out of 30 winners of the Jerwood Photography Award.

CHELSEA public programme
The exhibition Interalia 2014 will be accompanied by an in conversation event between Grenville Davey and Dr David Berman from Queen Mary University of London. The event will take place in the Banqueting Hall at Chelsea College of Arts on Thursday 22nd May 2014, 6-7.30pm. The event is free and open to all.
RSVP to info@chelseaspace.org