Martin Puryear comprises a selection of characteristically large-scale, enigmatic, semi-abstract sculptures, dating from 1997 to 2001, presented alongside a selection of large, limited-edition prints from 2001 and 2002. 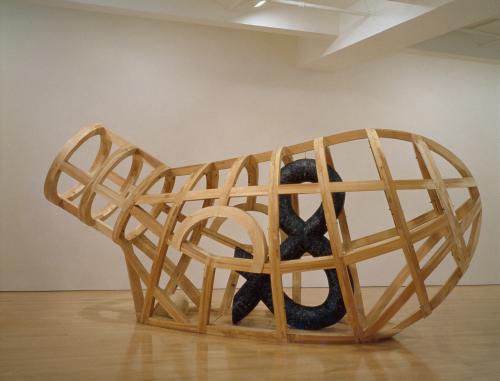 The first exhibition in Ireland by Martin Puryear, one of the leading exponents of US post-Minimalist sculpture, opens to the public at the Irish Museum of Modern Art on Wednesday 21 January 2004. Martin Puryear comprises a selection of characteristically large-scale, enigmatic, semi-abstract sculptures, dating from 1997 to 2001, presented alongside a selection of large, limited-edition prints from 2001 and 2002.

Martin Puryear uses a vocabulary of simple reductive forms to create works with a strong and direct physical presence. Process and materials are crucial to his work, which is predominantly based around traditional craft techniques of woodworking, furniture making, basketry and boat making. Puryear works primarily in wood, creating meticulously hand-crafted sculptures, which are often painted or combined with manmade material, such as wire and tar.

Puryear's work often presents dual meanings and contradictions, in both physical form and potential meaning. While essentially abstract, it frequently contains references to organic forms or physical objects - vessels, huts, nets - and demonstrates a striking physical duality appearing both dense and solid and transparent and fragile at the same time.

An extensive knowledge of nature, wildlife, history and geography, as well as an interest in Native American, African, Scandinavian, Japanese and Arctic cultures, have been major influences on Puryear's visual language. During the 1960s Puryear learned traditional wood joinery and the use of hand tools while teaching in Sierra Leone in West Africa. In Sweden he studied printmaking and sculpture at the Swedish Royal Academy. While in Sweden, he met renowned furniture craftsman James Krenov which was a formative experience.

Commenting on Puryear's work, IMMA Director Enrique Juncosa said: "We are delighted to give Irish gallery-goers the opportunity to experience this extraordinary body of work by Martin Puryear, whose originality and complexity make him one of the most important American artists of our time."

Born in Washington DC in 1941, Martin Puryear, who is an African American, has been creating sculptural works since the mid 1970s. He has exhibited extensively in the US, including one-person shows at the Brooklyn Museum (1988/89) and the Boston Museum of Fine Arts (1990). He also represented the USA at the 1989 SÃ£o Paulo Biennial. Puryear's sculpture is included in the collections of many of the major American museums including the Art Institute of Chicago, the Museum of Modern Art, New York, and the National Gallery in Washington.

The exhibition originated in BALTIC - the Centre for Contemporary Art, Gateshead, England. A catalogue, with an essay by Sune Nordgren, former Director of BALTIC, accompanies the exhibition.

Martin Puryear continues at IMMA until 9 May.