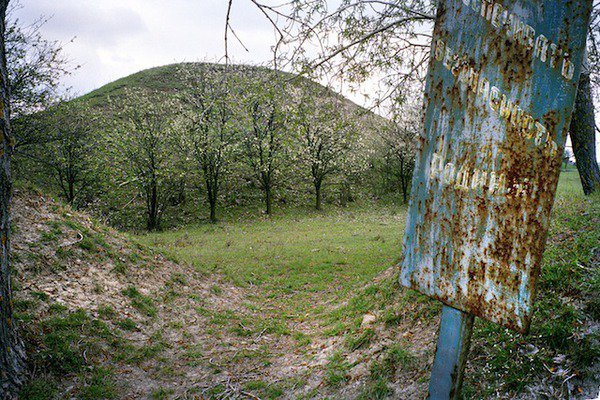 In a practice spanning more than four decades, Fouad’s work has come to be associated with documentary photography through lands that have experienced strife – with the landscape and architecture pockmarked with human conflict. The current body of work explores a similar topography of war.

After having decided to document abandoned soviet military bases in 2009, Fouad visited dozens of military bases in Poland, Hungary, Estonia and East Germany between 2010 and 2011. Most were aviation fields; others served separate purposes. And despite having being told there was nothing to photograph there, Fouad found the abandoned desolation far more captivating.

Deserted and invaded by nature, a force far more primal and stronger than weapons of war, the bases have become unserviceable areas of land. The utter silence and emptiness left Fouad the only protagonist in the plot, searching for abandoned stories, and his only ally was light, without which nothing could be seen.

The Third Line is pleased to welcome back Lamya Gargash, who will be showing her new body of work in the gallery Project Space. Lamya’s recent photographs expand upon her interventions in internal and external living spaces, seeking human presence in otherwise empty compositions.

Lamya’s practice has been concerned with the extensive study of identity and perception, and often documenting forgotten spaces in public and private realms in Emirati society. Finding herself caught in the chaos of daily life and the demands of motherhood, as well as the loss of several deaths in the family in the last three years, Traces echoes her longing for silent, stationary moments. The images showcase the artist’s heightened sensitivity towards finding beauty in the mundane.

The exhibition consists of a selection of photographs taken at various points in time, celebrating the visibly banal. These are spaces that still show signs of someone having left a mark of their presence – in effect also highlighting their absence: used plates after a family lunch, a stationery mickey mouse ride serenely staring off into nothingness, dirty drapes from Lamya’s now demolished house, and more.

As a photographer, Lamya finds that these poetic instances suggest moments of physical interaction of some sort and communicate our human-ness. They point towards the fragility of life, which strongly states the inevitability of mortality, and in the end the traces left behind are mere moments that will also fade with time.