A place of which we know no certainty 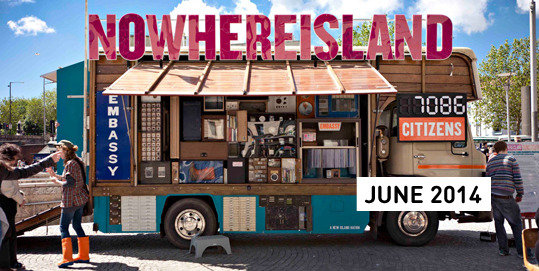 A place of which we know no certainty is curated by Peta Rake, recipient of ISCP’s 2014 Curator Award, which offers the opportunity for a curator or curatorial collective to present a new group exhibition. This award was established in 2010 for participants in selected curatorial studies programs, as a response to the lack of opportunities for emerging curators to present institutional exhibitions in New York City.

A place of which we know no certainty includes works by Laura Fitzgerald, Laura F. Gibellini, Alex Hartley, Jordan Loeppky-Kolesnik and Axel Töpfer that destabilize the idea of 'place' through intangible and imagined locations. The projects presented connect real and elusive places, such as Sandy Island, New Caledonia, the most recent case of an alleged ‘trap street’ (a fictitious entry on a map to ensnare copyright violators); Hy-Brasil, a phantom island said to lie off the coast of Ireland; or ‘Nowhereisland’ the world’s newest nation with ‘citizenship open to all’. The exhibition is also accompanied by a display of artists’ books and ephemera that subtly dismantle the authority of maps as subjective documents in need of scrutiny.

Sandy Island, New Caledonia doesn’t exist. First charted off the east coast of Australia by James Cook in 1774, Sandy Island was found on maps as late as 2012 until a surveyor ship passed through the location where the island was deemed to exist; finding no trace. Quickly removed from Google and National Geographic maps it was noted as a human error and officially 'undiscovered.'

While this case was assumed an accident, the practice of cartographic entrapment is commonplace, but largely denied by mapmakers. Formally called a “trap street,” the purpose of such is to ostensibly trap copyright violators, who, when caught red-handed could not explain the strange inclusion. Documented traps include fictional towns, phantom settlements, misrepresented streets, mountains with the wrong elevations, or counterfeit islands.

The industry of cartography, particularly during The Age of Exploration in the 15th century, assisted in the creation of global trade-roots, and consequently the trafficking of ideas and people. Today’s technologically advanced GPS mapping systems still use methods borrowed from these old documents, sometimes without question of their accuracy. Cartographic propaganda – in as much that maps are presented as miniature and subjective models of reality both politically and geographically – is a rare but documented occurrence where spatial knowledge can be deliberately distorted.

Peta Rake is an independent curator and writer and holds a Master’s Degree in Curatorial Practice from California College of the Arts. Currently, she is the Curatorial Assistant at Walter Phillips Gallery at The Banff Centre, Canada and is the former archive assistant at Steven Leiber Archive, San Francisco. Rake has curated exhibitions at CCA Wattis Institute for Contemporary Art San Francisco, Oakland Museum of California, Luggage Store Gallery, and Live Worms San Francisco. She contributes regularly to C Magazine, and her writing has appeared in Canadian Art, Fillip, San Francisco Arts Quarterly and Rearviews.