A Selection of Recent Acquisitions. This exhibition brings together a selection of 16 works by 13 artists, that articulate relationships between ideas and the physical world, considering image, text, gesture, and voice as sites of exchange between aesthetic, conceptual, and political concerns. 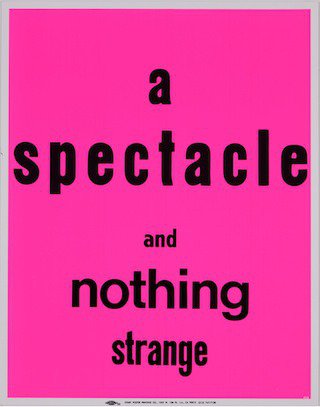 MoMA presents Sites of Reason: A Se lection of Recent Acquisitions, an exhibition of 16 works by 13 artists, most of which have been acquired over the last few years and are on view at MoMA for the first time, from June 11 to September 28, 2014. This exhibition brings together a selection of works that articulate relationships between ideas and the physical world, considering image, text, gesture, and voice—and hybrids of these—as sites of exchange between aesthetic, conceptual, and politica l concerns. The exhibition’s title is adapted from the phrase “the sight of a reason,” from Gertrude Stein's groundbreaking prose work Tender Buttons (1914). In an ongoing project, Los Angeles–based artist Eve Fowler has reproduced fragments from Stein’s writings in commercially printed posters originally displayed in public locations throughout L.A. Stein’s aim to free language from its predetermined usage—and Fowler’s act of recontextualization— provide a point of departure for the exhibition.

The exhibition begins in the third-floor corridor with a work by Simryn Gill (Singaporean, b. 1959). Using the printed word as source material, the artist often appropriates and transforms text, raising questions about legibility and representation. For Where to draw the line (2012), Gill had five essays she wrote over the course of a year meticulously typed out on a manual typewriter. The resulting nine sheets of text are saturated, without spacing, on scroll-like sheets of paper, overtyping any errors and repeating the text as necessary to f ill the space. The highly personal, lengthy texts are enormous, densely printed, and virtually indecipherable.

The exhibition continues down the corridor with Eve Fowler’s 21 posters, A Spectacle and Nothing Strange (2012–ongoing), produced by the historic Los Angeles–based Colby Poster Printing Company. Known for its iconic mass- produced signage, Colby's posters were used to widely advertise concerts and events throughout L.A. for decades, becoming a recognizable part of the city’s landscape. Fowler has transposed Stein’s language from the intimate experience of reading a book onto the direct interaction with advertising in the public realm; the posters were originally placed in public locations around Los Angeles, where one might expect to see Colby ads. This is the first time the posters have been displayed in a museum context.
At the end of the corridor is a late wall drawing by Sol LeWitt (American, 1928–2007) titled Wall Drawing #1187, Scribbles: Curves (2005). Based on the artist’s instructions, LeWitt’s works are the result of a specific value system enabling the expansion of written instructions into action and material form. Unlike his earlier works that emphas ized the flat plane of the wall, this work is comprised of overlaying graphite scribbles that build six densities of grays into near black in bands, which establish spatial depth. Formally, the work re calls the rolling effect of an interrupted analog video signal, suggesting a temporal dimension as well.

Next to the drawing is Boomerang (1974), a video made by Richard Serra (American, b. 1939) with Nancy Holt (American, 1938–2013). In the wo rk, originally broadcast over public access television, Holt speaks as her words are fed back to her through headphones with a one-second delay.
As her voice reverberates, or “boomerangs,” ba ck, she states, “words become like things,” disconnected from their individual meanings and from a cohesive text. This interferes with Holt’s thought process and establishes a distance between the artist and her own self-perception.

Featured at the center of the Special Exhibiti ons Gallery is a pivotal work from 1974 by Allen Ruppersberg (American, b. 1944) titled The Picture of Dorian Gray. Transcribing the text from Oscar Wilde’s 1890 novel over 20 panels, Ruppersberg attempted to “conflate reading and writing” through narrative and visual form. In another layer, Wilde’ s book itself ruminates on art, as the ultimate protagonist of the novel becomes a mysterious portrait painting with a metaphorical life of its own. Ruppersberg’s meticulous hand-copying of Wilde’s text speaks to his appreciation for the novel, while translating the written word into a work for an audience outside the book.

Across from Ruppersberg’s work is Seth Price’s Essay with Knots (2008). A test in the distribution of ideas and materiality, the work exists as a set of forms that contain a text titled “Dispersion,” which explores the profound changes in art and consciousness in the digital age. Using different means of circulation that describe each other and become redundant—the physical artwork itself, which takes on the form of individual page-like units lassoed together with ropes; a printed book available in stores; and a free PDF of the book available on the artist’s website—Price situates the artwork in different economic sphe res, allowing for multiple possibilities of presentation that are all “equally the work.”

For Tilt/Swing (360° field of vision, version 1) (2009), Liz Deschenes (American, b. 1966) gives physical form to a concept illustrated in a 1935 drawing by Herbert Bayer, “Diagram of 360 Degrees Field of Vision.” In this schematic, Bayer—a Bauhaus-trained graphic designer, architect, and sculptor—conceived of a viewing situation breaking from the museum convention of hanging paintings on a wall; instead, his design allowed for works to be installed on all six walls of a room, including the floor and ceiling. With Tilt/Swing , Deschenes has brought Bayer’s drawing to life using six photograms—made using cameraless exposure to the night sky and filled with subtly varying light from the moon, stars, and surrounding buildings—sus pended in a 360-degree aperture formation. The photograms act as hazy mirrors, at once reflecting fragments of the changing environment back into the work itself and onto the architecture in which it is displayed; their surfaces are left untreated, and are intended to oxidize in response to shifting atmospheric conditions.

Conversely, a sculpture by Peter Downsbrough (American, b. 1940) articulates space much like a drawn line, calling attention to subtle shifts in its surrounding environment as it remains unchanged.

Two Poles (1974) is comprised of two opposing slim wood poles inserted into an architectural setting. Since the 1970s, Downsbrough’ s modestly formed sculptures have reframed the viewer’s perception of space and relationship to an artwork in such a space. In parallel with his sculptural works, the artist has also created artist s’ books and drawings that provide a more discrete frame for his interventions. In addition to the four drawings and the sculpture on view in the gallery, Downsbrough’s work, Two Pipes (1972), has been installed in The Abby Aldrich Rockefeller Sculpture Garden.

The work of Charles Gaines (American, b. 1944) often merges issues of cultural identity, race, and social justice, as exemplified in his two-part work Manifestos 2 (2013). Four large graphite drawings present musical scores, each translated from historic texts of revolutionary manifestos— including text from “An Indigenous Manifesto” (1999) by Canadian activist and educator Taiaoale Alfred, addressing the history and future of indigeno us peoples; Malcom X’s last public speech in 1965, in which he preaches for harmony among religions; Raul Alcaraz and Daniel Carrillo’s “Indocumentalismo” (2010), which calls for rights for undocumented individuals; and the “Declaration on the Rights of Women,” written by Olympe De Gouges in 1791, championing equality among the sexes. Gaines has created an operatic performance for each of the scores—using each letter’s corresponding musical note and the spaces as musical pauses—which play on accompanying video monitors. As the manifestos act individually and together, Gaines considers the multiplicity of identity and the ways in which the activist content of these texts become—sonically, emotionally, and intellectually—complicated by the affect of music.

With the two-channel video work Sense and Sense (2010), Emily Roysdon (American, b. 1977) considers the ways in which political movements are represented within a broader interpretation of choreography as organized move ment. For this work, Roysdon collaborated with performance artist MPA, whose own work examines th e personal and political implications of the body in space. MPA walks on her side in a 90-degree va riation on the everyday gesture, her body pressed to the ground, through the Sergels torg pedestrian plaza, Stockholm’s buzzing central square and the site of countless political demonstrations. MPA’s physical struggle to appear upright recalls the illusion of free speech and movement embedded in the site and emphasized through its formal abstraction.
Further, the everyday movement of passersby is rela ted to traces of theoretical or political movements galvanized there.

Since 1977 Matt Mullican (American, b. 1951) has used hypnosis in his artistic process, which he considers a conceptual strategy for breaking pa tterns of everyday life in order to expose the underlying structures of his subconscious. Work ing in this altered state, Mullican becomes that person, an ageless, sexless being that is a passenger inhabiting his body. In performance-like fugues, that person crafts artworks while talking to himself through a haze of hypnotically induced intoxications or psychosis. Untitled (Learning from That Person’s Work: Room 1) (2005) is a large-scale manifestation of such a work. This disorienting, maze-like installation is crafted in 12 parts, in which bed sheets, each covered with nine collaged ink-on-paper dr awings, become interior walls between which the viewer traverses. An accompanying video componen t adds dimension, and Mullican’s voice, to the installation.

While living in New York City from 1966 to 1968, Hanne Darboven (German, 1941–2009) developed a painstakingly organized iconography of systems of choreographed lines, producing a rhythmic cadence which is visible in this untitled work from around 1972. Darboven worked in near isolation during her time in New York, but did befr iend fellow artist Sol LeWi tt, with whom her work shares an intellectual and formal relationship. Both artists dealt with the manipulation of systems as a visual style.

The exhibition is supported in part by The Junior Associates of The Museum of Modern and by the MoMA Annual Exhibition Fund.