The solo show stages 40 photos from the collection 'Inner World', a project completed in 2007-2009 in the Mastic Villages of Chios island. Hcery shops, cellars, schools: forgotten sites of a collective popular culture, which lost the battle of time. 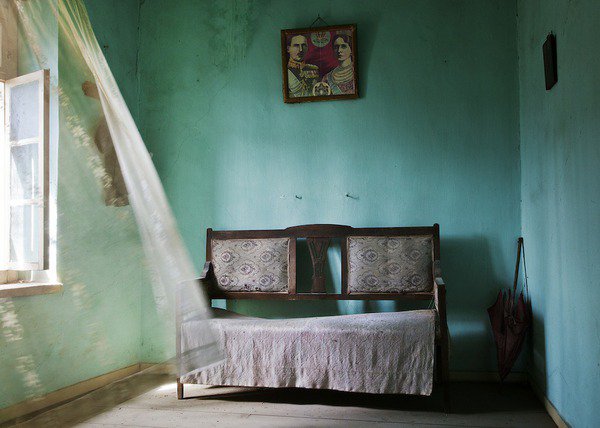 The personal exhibition of the Greek photographer Stratis Vogiatzis will stage 40 photos from the collection Inner World, a project completed in 2007–2009 in the Mastic Villages of Chios island.

Stratis Vogiatzis is a dreamer and enthusiast artist, devoted to his art and at the same time determined and combative for the preservation of the values in which he firmly believes. After working in various countries around the world, in this project the photographer returns to his beloved island and pays visit to the places of his childhood. With his camera he captures a piece of the Aegean folk culture, he discovers and reveals to us the hidden world of the Mastic Villages. These Medieval villages of Chios became rich and famous thanks to the cultivation of a small tree that “sheds a tear”, a fragrant resin which was widely used since the 14th century. In recent years this commerce lost its importance, so entire villages have been abandoned.

Hcery shops, cellars, schools: forgotten sites of a collective popular culture, which lost the battle of time. Stratis uses his talent and sensitivity to penetrate the private places, to catch the soul of the people who lived there, to get the meaning of their lives. The human figure is completely absent in the shots, but behind this absence we find evident traces of everyday life, habits and traditions.

Interior landscapes and scenarios in the limit between memory and reality, become a historical document that reflects the people’s stories. The images are humble, unpretentious, like folk paintings, with dramatic colors and amazing details that create an emotional atmosphere.

Stratis Vogiatzis was born in 1978 in Chios, Greece. He studied Economics and Political Sciences at the University of Thessaloniki and Social Anthropology at the Amsterdam University. He has worked as a teacher at immigrant communities and as a freelance photographer for commissioned projects in various countries, such as Turkey, Palestine, India, Vietnam, Tanzania, Kosovo, Morocco, Mexico and Iran. He has directed several independent documentary films awarded in international film festivals: The Blind Fisherman, award at the 14th International Documentary Festival, Thessaloniki, Greece, 2012; Caravan Project, award at the 16th International Documentary Festival, Thessaloniki, Greece, 2014 and at the Festival International du Film d'Environnement, Paris, France, 2013. At the beginning of 2014 he has been selected among the 24 artists that represented the Greek Contemporary Art at the exhibition Nautilus: Navigating Greece, the Bozar Museum, Brussels.