'Open Form' was initially conceived as a tool for designing architectural projects, but its evolution and application in education, film editing, visual games and performance led to a wide range of experiments based onthe interaction with the other and the exchange and socialisation of the artistic object at the centre of the creator's attention. The exhibition traces the evolution of Hansen's theory of Open Form from its origins in his own architectural projects through its application in film, multiscreen slide projections, visual games and the performance art of other practitioners. 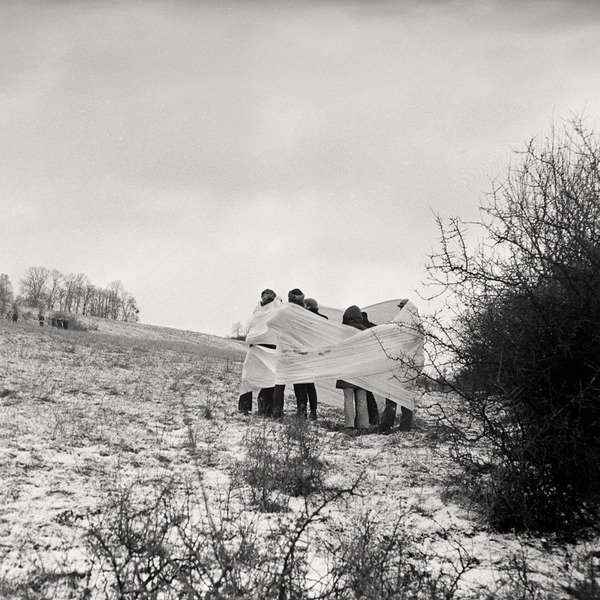 curated by Soledad Gutiérrez and Łukasz Ronduda, in collaboration with Aleksandra Kędziorek

The Museu d’Art Contemporani de Barcelona (MACBA) presents the exhibition Oskar Hansen. Open Form, co-produced with the Museum of Modern Art in Warsaw, and dedicated to the practice of Oskar Hansen (1922–2005), the Polish architect, urban planner, theorist and pedagogue. Following MACBA’s line of research on the relation between architecture and other artistic practices, the exhibition traces the evolution of Hansen’s theory of Open Form from its origins in his own architectural projects through its application in film, multi- screen slide projections, visual games and the performance art of other practitioners.

Oskar Hansen was a member of the architectural group Team 10, who voiced the first criticism of the modernist orthodoxy of the Athens Charter and the followers of Le Corbusier. Hansen launched his Open Form theory at the CIAM congress in Otterlo in 1959. More an ‘attitude’ than a theory, Open Form was initially conceived as a tool for designing architectural projects, but its evolution and application in education, film editing, visual games and performance led to a wide range of experiments based onthe interaction with the other and the exchange and socialisation of the artistic object at the centre of the creator’s attention.

Open Form was interested in developing strategies of indeterminacy, flexibility and collective participation, and was totally open, even for Hansen, to the possibility of continuous transformation, to the influence of similar practices, and, even more directly, to the approval of the students of the Academy of Fine Arts, Warsaw, where Hansen had taught since the early fifties, after being banned from practising as an architect by the Polish government for his violation of the then mandatory principles of Socialist Realism.

It was at that time that he began his activities as a pedagogue, experimenter and catalyst of a new way of making art. Hansen invented a revolutionary system of education that encouraged the creative and relational faculties of the individual and the group. As a system, Open Form considers that all individual actions must strive to bring forth a response and the implication of the other or the group. This exhibition focuses on the importance of radical teaching methods at times of crisis in the official system of education, and the role of art as provider of experience and knowledge outside the classroom.

The exhibition at MACBA develops the idea of Open Form through the main areas to which it was applied by Hansen, aiming to expose its multiple layers in a series of sections that can be freely connected without imposing a ‘closed’ reading or way of experiencing it. The architecture of the exhibition becomes an integral part of it, thus highlighting an interest Hansen shared with modern Polish architects working under state socialism: the architect as curator. Exhibition design gave architects the necessary freedom to experiment with other forms of expression. With this in mind, the exhibition has reconstructed two of the exhibition structures conceived by Hansen in his role as curator: a ‘choke chain’ presented at the Po Prostu gallery in 1957, linking the exhibited works and the gallery space to the surrounding area; and the 2003 installation at the DAP Gallery (one of his last), where a construction in the shape of an abstract ribbon created a backdrop for visitors wandering around the gallery. They have both been adapted to the Museum space by Centrala, a Warsaw- based architecture collective that has worked on the Hansen archive.

Hansen’s ideas on urban planning were developed from within the specific architectural culture and the political and economic reality of state socialism. This is reflected in his Linear Continuous System, an extension of the idea of Open Form that proposed replacing the main urban centres by linear belts of development stretching throughout Poland and Europe. The exhibition features Hansen’s drawings illustrating this theory, as well as maps and a model of the Western Belt, 1976. This part of the exhibition illustrates Hansen’s liaisons with Team 10, both direct (throughhis articles published in Team 10’s journal Le Carré Bleu) and conceptual (expressed in his interest in participation, ecology, humanisation of cities and factories as well as a revision of the urban principles of modernism, expressed, for example, in the surveys held among the inhabitants of the Juliusz Słowacki Housing Estate in Lublin).

Hansen’s research in the fields of cybernetics, the relation between architecture and the media, as well as mobile architecture, is presented in the exhibition through the Polish Radio Experimental Studio, 1962, whose space and colour scheme were adapted to the sounds of the electronic music created therein. This is accompanied by designs for mobile architecture and exhibition spaces, such as the drawings of the pavilion at the Izmir International Fair, 1955, the Studio Theatre in Warsaw, 1972, and the Museum of Modern Art in Skopje, 1966. This section is complemented by reports made by his students in the early 1970s on various projects involving cooperation with television – such as KwieKulik’s Activities in TV Studio and Paweł Kwiek’s Video A – and the official cinematography and propaganda. Questioning the accepted relationship between artist and viewer, these works often implied a dialectical interaction between the person holding the camera, the actor and the audience, while offering a commentary on the complexities of artistic production and putting forward a non-authoritarian language for new types of media.

The section in the exhibition dedicated to private spaces shows two spaces designed by Hansen and his wife Zofia. On the one hand, an apartment in Sędziowska Street in Warsaw, 1950–55, that is a perfect example of Hansen’s concept of the active negative: a sculptural way of presenting the emotional reception of architectural space. And on the other, his house in Szumin, situated by the Bug River, which became an ideal educational tool for the way it brought to the fore questions related to the permeability of space and its integration with its immediate environment.

The section entitled Counter Monument focuses on the first public debate around Open Form architecture and its principles. In 1957 Hansen and a group of architects won the competition for the monument in Auschwitz-Birkenau, which proposed the construction of a black asphalt road across the ruins of the concentration camp, thus negating it as something that should never have occurred, while creating a space for visitors, allowing them to observe the ongoing process of entropy. The monument is an excellent point of reference for explaining the principles of Open Form.

The didactic tools created by Hansen during his long tenure at Warsaw Academy of Fine Arts (from 1952 to 1981) helped students explore questions related to composition and the perception of visual phenomena, including the actual exhibition space, through the Open Form principles as explained in the diagram used by Hansen in his lectures. Furthermore, through archival photos and films (including a recently digitalised extract from KwieKulik’s film entitled Open Form: Hansen’s Studio, 1971), we observe how these didactic tools were put to use in Hansen’s studio and can experiment with them in the exhibition space. In this section we see clearly how the concept of Open Form shifted from architecture to the visual arts and performative artistic practice (e.g., in the film Game on Morel’s Hill, 1971). Here we find an example of the applicability of Hansen’s theory and practice, not only to different architectural scales but also to different fields of cultural production.

Finally, the exhibition questions the influence of Open Form on Polish Art of the period, by proposing a change in the relation between artist and viewer, opening art to participation and valuing ‘process’ as an important contributory dimension. In the 1960s Hansen’s students pursued Open Form as the basis for a collective, communication-oriented production. Through a process described as ‘working with the camera’, artists recorded indeterminate actions and ephemeral performances coordinated within the camera’s field of vision. Thus, while Hansen stressed a type of participatory involvement through the ‘energy of the client’s initiative’, this group of artists saw collaboration as a series of ‘provocations’ and ‘responses’ that questioned not only authorship, but the very status of the work itself.

The group focused on developing ‘activities’, ‘structures’ and ‘games’ through which forms of collective action would emerge. An insistence on the unpredictable unfolding of these processes in formal, social and temporal dimensions was married to an emphasis on objective documentation. While mathematics, cybernetics and communication theory formed their main terms of reference, these artists also conceived their work as a radical social practice, experimenting with non- authoritarian systems and offering possibilities for intervention in contemporary politics and propaganda. Various approaches to the idea of Open Form are present in the works of Grzegorz Kowalski, Artur Żmijewski, Paweł Althamer, KwieKulik, Paweł Kwiek, Wiktor Gutt and Waldemar Raniszewski, among others.

The exhibition will be accompanied by the publication Oskar Hansen – Opening Modernism. On Open Form Architecture, Art and Didactics, edited by Aleksandra Kędziorek and Łukasz Ronduda.