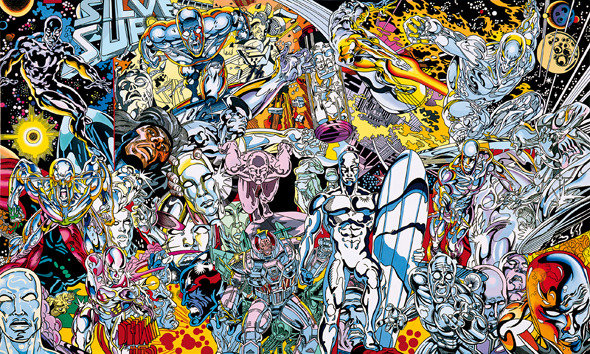 From September 12 to October 25, the Hilger BROTKunsthalle (Absberggasse 27, 1100 Vienna) will be presenting large-format oil paintings by the Icelandic artist Erró. The show will also include works by Jean-Jacques Deleval, Mel Ramos and Deborah Sengl.

Erró is best known for his collage-style paintings, densely populated with a wide array of characters: (in)famous public figures such as Mao, Hitler or Stalin appear next to art icons such as Picasso, van Gogh or Leger and are accompanied by cartoon and comic characters ranging from Red Sonja to Mickey Mouse. The exhibition Erró and Friends. American Comics II focuses on this last category—exploring the role that figures taken from and inspired by American Comics have played in the Icelandic artists oeuvre.

Erró counts as one of the great pioneers of 20th-century art. In the past 50 years, the artist has created a unique body of work that defies all categorization and has lost none of its resonance.

Born Gudmundur Gudmundsson in 1932 in Ólafsvik, Iceland, he studied from 1952 to 1954 at the Art Academy in Reykjavik and Oslo. Subsequently he went to Ravenna and Florence and became involved in the techniques of fresco painting and mosaic art. In 1958, he moved to Paris and joined the international avant-garde. Strongly influenced by the revival of Surrealism in the mid-1960s, he developed his own form of critical/ironic collage painting amidst the "new realism" and Pop Art trends that were unfolding in Europe and the US.

At once overwhelmed and inspired by the explosive growth of consumer society and a never before seen flood of images and art governed by mass culture, there emerged in the 1960s a thematic series of works between Surrealism and Pop Art with comic and science-fiction elements; striking and story-like, socially critical and humorous, and at times even moralistic and stark.

The large-format works, which previously were exhibited at the Arsenal – Musée de Soissons, are juxtaposed with canvas works by Jean-Jacques Deleval, prints by Mel Ramos and drawings by Deborah Sengl. The exhibited works all explore varying themes relating to comics, in particular American Comics.