The Philippe Meaille Collection of Art & Language Works has more than 500 works covering one of the most complex and belligerent artistic experiences of the second half of the twentieth century. Their production challenges art history's own vocabulary. Its creative practice adopted conversation as a workplace, questioning what could be identified as the art object. 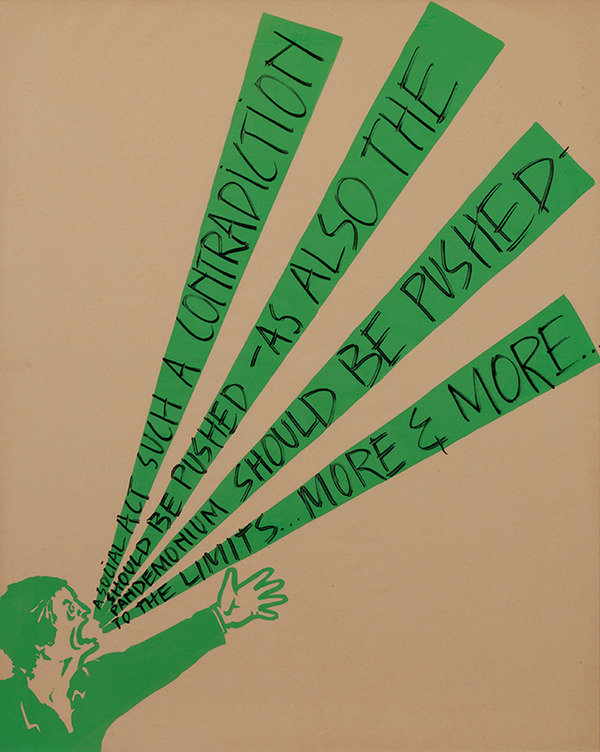 The Museu d’Art Contemporani de Barcelona (MACBA) presents Art & Language Uncompleted. The Philippe Méaille Collection, one of the most complete and extensive exhibitions of work by Art & Language. The Philippe Méaille Collection of Art & Language Works, deposited at MACBA since 2010, has more than 500 works covering one of the most complex and belligerent artistic experiences of the second half of the twentieth century. The production of the Art & Language collective challenges art history’s own vocabulary. Its creative practice adopted conversation as a workplace, questioning what could be identified as the art object.

In 2010 the French collector Philippe Méaille deposited at MACBA his private collection of works by Art & Language: more than 500 pieces of very different types – paintings, drawings, sculptures, installations, documents, writings, typescripts, annotations, microfilms, maquettes and publications – requiring a reconsideration of the role of writing in the practice of art. After four years of study, documentation and restoration that have involved the contributions of various departments of the Museum, MACBA presents the exhibition Art & Language Uncompleted. The Philippe Méaille Collection, which brings together an exceptional selection of works by this collective, many of which will be on exhibition for the first time.

The Philippe Méaille Collection of Art & Language Works is the second most important private French collection in a European museum. This collection allows a detailed description of the intellectual network woven by the artists who were part of the collective, including Terry Atkinson, David Bainbridge, Michael Baldwin, Ian Burn, Joseph Kosuth, Philip Pilkington, Mel Ramsden and Dave Rushton, together with art historian Charles Harrison. In the early 1970s, Art & Language also included an extensive list of New York-based contributors, most especially Michael Corris, Andrew Menard, Kathryn Bigelow and Preston Heller.

Art & Language founded its practice around a community of ideas. The magazine Art-Language was first published in 1969 and became the platform for one of the most intense theoretical productions of the second half of the twentieth century. Based on language, discourse and conversation, Art & Language critically reviews the system of modern art and its premises, challenging the existing vocabulary of art history and refusing to join any definite artistic identity. Through this practice, conversation – which is often considered a commentary on labour – becomes the workplace itself; in other words, it takes the place of the art object rather than being a vehicle that signifies the work.

The conversational, discursive and essayistic form that characterises the production of Art & Language, unbroken to this day, is now continued through the participation of Michael Baldwin and Mel Ramsden. Art & Language also occasionally collaborates with the German collective The Jackson Pollock Bar, the musician Mayo Thompson and The Red Krayola group, who since the mid-seventies have put music to texts with which Art & Language criticises the cultural policies of contemporary art. The exhibition at MACBA avoids any archaeological vision and offers the possibility of establishing relationships between heterogeneous material, discarding the separation between different artistic practices and establishing connections that link the various episodes throughout a trajectory spanning nearly half a century.

The exhibition will be accompanied by a publication produced by MACBA that includes a broad representation of works by Art & Language deposited at the Museum, together with texts by Art & Language, Carles Guerra, Matthew Jesse Jackson and Philippe Méaille. On the Museum website (www.macba.cat) you can view and download the latest edition of the collection ‘Quaderns portàtils’ dedicated to Art & Language, which contains a conversation between artists Michael Baldwin and Mel Ramsden, the collector Philippe Méaille and curator of the exhibition Carles Guerra.

The Fundación AXA was established in 1998 to promote risk prevention under a policy of patronage and sponsorship focused on the dissemination of cultural heritage, aware that this is an important legacy to be transmitted to future generations.