'On the Margin of Places' Chia Wei Hsu presents five short films about the forgotten histories of the Cold War in Asia. In her exhibition for the Falkenrot Prize 2014 Meise is showing her newly produced series of works ceramic portraits through her own interest in the theses of feminist psychoanalys. 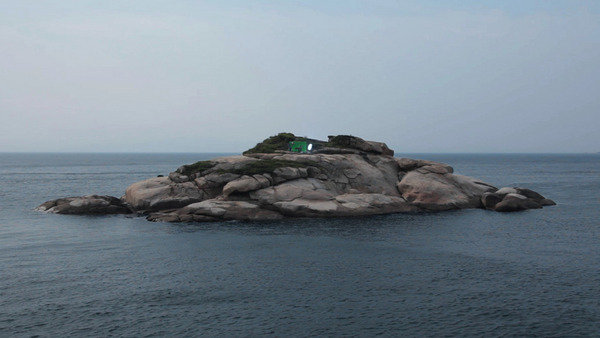 Chia-Wei Hsu
On the Margin of Places

Chia-Wei Hsu’s artistic approach is characterised by the creation of special ‘narratives’, film documentations, into which he incorporates site-specific characteristics, history, and also myths and legends from the collective memory of the inhabitants of the place in question. More recently, Hsu has been focusing his research primarily on the effects of the Second World War and the Cold War in Asia, as observed apart from the ‘great’ events of history.
For example, two of the five short films shown in On the Margin of Places are concerned with different aspects of the legend of a frog deity called “Marshal Tie Jia”, whose very ancient temple on the Chinese mainland was destroyed during the Cultural Revolution; a temple dedicated to this god could also be found on a tiny island far away from his origin, in today’s Taiwan, which was forced to make way in its turn for a bunker following Chiang Kai-shek’s withdrawal to Taiwan, and was rebuilt on a neighbouring island. There, Tie Jia is still revered today, and his advice is sought by the local people with the help of an oracle.
To clarify the complex factual and fictive contexts that Hsu addresses, the artist has assembled a brochure for visitors as an integral component of the exhibition; on the basis of sketched maps, charts and text passages, in this booklet he visualises the ‘stories inside history’ that he has taken up.

Chia-Wei Hsu is currently receiving a grant from the Ministry of Culture, R.O.C. (Taiwan). His stay in Berlin is also being supported generously by the representation of Taipei in the Federal Republic of Germany.

Initiated in 2005, the Falkenrot Prize is being presented for the eighth time this year. It is conferred upon contemporary international artists whose outstanding self-awareness is destined to establish new standards and reset media boundaries. The Falkenrot Prize 2014 has been awarded to the artist Michaela Meise (born 1976), who lives in Berlin.

In her exhibition for the Falkenrot Prize 2014 Meise is showing her newly produced series of works entitled Mothers – ceramic portraits of mothers, to which she was inspired in exchanges with other artists and through her own interest in the theses of feminist psychoanalyst and cultural theorist, Luce Irigaray: “I began with the portrait of my own mother, working entirely from my memory and imagination. To my surprise the face that emerged seems to be quite close, as if bending down over me. There were also small scenes at the edge, showing how my mother played out in the streets with other children as a child, as well as an aerial photo of the war-devastated city in which she grew up, and lavender, which she loves so much. Rather than her name, I had inscribed “my mum” into the clay.” (M. Meise)

This exhibition by Michaela Meise is supplemented with selected works by painter Kate Diehn-Bitt (1900–1978), who developed a completely unique and unconventional pictorial language. Meise has made a thorough investigation into her work and rates it extremely highly. The exhibition also includes Meise’s work Diehn-Bitt Frieze.