Group show. When a character from a comic strip finds himself in front of an impassable wall, he draws a door, jumps through... and disappears. A good number of works today offer this same opportunity. The artist presents a door and the visitor jumps through. But once through, the visitor realizes that the world she finds on the other side is identical to the one she just left. Visually indistinguishable, the objects however seem bound by a different gravity, with a different density. 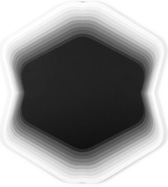 When a character from a comic strip finds himself in front of an impassable wall, he draws a door, jumps through... and disappears. A good number of works today offer this same opportunity. The artist presents a door and the visitor jumps through. But once through, the visitor realizes that the world she finds on the other side is identical to the one she just left. Visually indistinguishable, the objects however seem bound by a different gravity, with a different density. This world seems animated by an undefined energy, while almost nothing visual distinguishes it from ours.

Astronomers recently hypothesized that five billion years ago the universe experienced a "cosmic jerk", and started to expand. This cosmic acceleration occurred, it has been hypothesized, when the â€˜dark energyâ€™ grew to a point where it could dominate the gravity of matter, and hence made the universe expand. As Einstein put it, â€œThere is no fixed point in the universe.â€ And this five billion year pattern of expansion has imposed upon us a perpetual state of indeterminate position â€“ a universe of gliding. Faced with the total lack of fixed points, the limits of reality become effaced, as inexorably as the desertâ€™s sprawling expanse.

This is where contemporary philosophers find their greatest anguish: the present slides on the surface of time, making it impossible to grasp a reality marked by clearly delimited temporal reference points. Immersed in a global time frame, we are witness to a compression of the past, present, and future, and we are transported into the immediate, into instantaneousness. Dominated by the notion of â€œreal time,â€ the present can only pass by, in a movement of continuous transit, of perpetual gliding. Certain philosophers, such as Paul Virilio, are disturbed by such a situation, distinguished by the rupture in the markings of traditional time, where man can no longer (and no longer wants to) slow down this constant transfer, where he must lose all hope of regaining the common signs that define his condition of being in the world. How can we live in a universe devoid of limits, when the very search for these limits is necessary to maintain our equilibrium? Such a paradox is at the heart of the reflections shared by humanists of all varieties.

Generally considered as an obstacle to overcome, a problem to eradicate, gliding through the world constitutes a fantastic challenge for art. Rather than shunning this, contemporary art joins with it by adopting this very dynamic. The old notion of building new platforms has been left to the art of the past. No longer believing in the virtue of in-between spaces that had infiltrated the art of the 1990s, todayâ€™s artists engage in an activity that can seem difficult or even dangerous. â€œA losing battle,â€ their parents lament, shaking their heads. We retort, citing Benâ€™s famous formula, â€œArt is a dirty job, but someoneâ€™s gotta do it.â€ Artists take to the extreme this propensity of letting themselves go, not resisting the expansive sprawl of the desert, to let themselves be caught up in the breaking waves that efface all tracks, all limits. Not that they have decided to turn off the television, to stop smoking, and to concentrate on the moral values of our society. No â€” they watch reality TV while drinking beer, sleep late, and read the tabloids. But rather than be defeated by this state and revolting every new year with a resolution that â€œthis year Iâ€™ll be better,â€ they dive straight into it, gliding, like parasites, adopting their hostâ€™s method of function. They attempt to adapt their speed to the instantaneousness of our time, and develop a true aesthetic of gliding.

With Under Pressure and Mayday (2001), Extra, Liquid Sky and Dust Memories (2003) and now Five Billion Years, the SI proposes a series of group exhibitions that put in perspective the interpretations that art can give to our reality. With this model of gliding, the world no longer appears as a series of points forming lines, rather it manifests itself in a series of tangent planes. It rides on links and traverses layers. In the same way, art is no longer defined by position or place. It glides over the visible and exposes the limitless number of strata that make up its structure. It contributes to the densification of the real, it adds to its complexity.

Like the exhibitions that have preceded it, Five Billion Years, does not intend to develop a discourse, nor to provide a specific message to these reflections. Nor does this exhibition try to illustrate the words of a press release. An exhibition is a specific language, text another. What matters are movements, energies, interpretations and the constant oscillations between languages (as between different objects) that shake up our interpretive system. (MOW / GG trans.)

LATE NIGHT AT THE SI, Friday March 12, 7 â€“ 11pm
come visit at 495 Broaday for a late viewing of Five Billion Years
plus special performances and screenings by
New Humans Collective and Red Shoe Delivery Service
please RSVP for this event by emailing events@swissinstitute.net *

*note RSVP list doesn't not guarantee admission,
but aids preparation and helps us keep count of how many people to expect