Campbell's work blends the inherent promise of storytelling with the breakdown of narrative and meaning. His artistic production spans several media and concerns itself with the boundaries between record and interpretation. Primal Architecture presents works by international artists that elaborate on notions of identity, architecture, power and nostalgia. 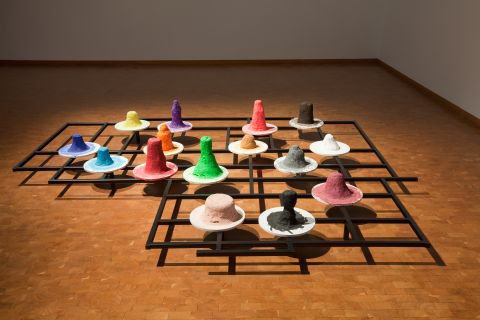 IMMA presents the first major exhibition in Dublin by Turner Prize Nominee Duncan Campbell. Irish-born artist Duncan Campbell‘s (b. 1972) artistic production spans several media and concerns itself with the power of stories and the boundaries between the actual and the imagined, historical narrative and media representation, record and interpretation.

Campbell’s work blends the inherent promise of storytelling with the breakdown of narrative and meaning. His preoccupation with truth and refusal to adhere to prescribed or narrative conventions resonate in recent works such as Arbeit (2011) about the German economist Hans Tietmeyer who played a key role in the centralization of the European financial system and Make It New John (2009), which takes as its subject the American automobile engineer and magnate John DeLorean and his iconic DMC-12 car, as well as the West Belfast plant where it was produced. Similar notions are addressed in Bernadette (2008), his documentary about controversial Irish republican MP and civil rights activist Bernadette Devlin.

This exhibition borrows its title from an iconic work by the influential American artist Mike Kelley Primal Architecture (1995) in which the artist uses sculptural forms to map a history of his personal genealogy.

Exploring ideas inherent in Kelley’s piece this exhibition brings together works by Irish and international artists that elaborate on notions of pseudo-autobiography, consciousness, identity, architecture, power and nostalgia. Since the sixties, contemporary art has been associated with moments or acts of crises and political change. Often these acts have not only affected art, but also mirrored what was happening within the world. This exhibition, Primal Architecture, unfurls in the form of a sequence of episodes or chapters that can be read with relative autonomy, each offering exhilarating interpretations of the human condition and the complex ways we interact and narrate the world around us.

Primal Architecture will feature artworks spanning across varied media and decades, including installation, video, sculpture, drawing, performance and photography. It includes artists – Mike Kelley, Jeremy Deller, Conrad Shawcross, Kevin Atherton, Linder, Jesse Jones and Bedwyr Williams. For many of these artists this exhibition at IMMA will be their first presentation in Ireland.

Visitors are advised that this exhibition contains adult themes and explicit imagery.
Talks and Events

Lecture: Revising Critique, Revising Fetish
Thu 22 Jan, 6pm- 7pm, Lecture Room
Dr. Sinead Hogan (IADT) adresses how critique is intimately related to decision making and quality of judgement. This lecture will focus on how the notion of critique can be approached through the fetishised object. Presented in collaboration with IADT ARC.

Lecture: What is Primal, What does science say?
Wed 4 Feb, 6.30pm- 7.30pm, Lecture Room
David McConnell (Fellow Emeritus, Smurfit Institite of Genetics, Trinity College Dublin) discusses primal events of the known universe and questions whether they can tell us anything about art and the creative impulses of artists.

Discussion: Post Punk Reflections
Wed 11 Feb, 6pm- 7pm, Lecture Room
This discussion reflects on the musical energy and resistance of punk culture and its broader impact on the changing cultural and political conditions of 1970's to now. Popular culture, activism and Northern Irish politics and society will be explored.
Publication

Primal Architecture will be accompanied by a fully illustrated publication that ranges across multiple disciplines to include contributions from leaders in the diverse fields of New Media, Performance Art and Genetics. The publication will include texts by international writers including Dan Fox (Co-Editor frieze); Doug Harvey (Los Angeles based writer, curator, artist, and editor of pata-critical Interrogation Techniques Anthology Volume 3); Maeve Connolly (Writer, researcher and lecturer at Dun Laoghaire Institute of Art, Design & Technology, Dublin); Rachael Thomas (Senior Curator: Head of Exhibitions, IMMA); and David McConnell (Professor of Genetics, Trinity College, Dublin). In a further exploration of the diverse themes in the exhibition, the publication will also include contributions and responses from the artists involved. The publication will be available in 2015.